Home » TV » Evil Recap: Believe It Or Not

Evil Recap: Believe It Or Not

CBS’s new supernatural procedural is sicker and slicker than your average, and one of the better network shows airing now.

CBS’s new supernatural procedural is sicker and slicker than your average, and one of the better network shows airing now.

Robert and Michelle King are best known for The Good Wife, but their new genre-blending procedural Evil (CBS) is destined to become another hit. The show, which combines horror and comedy, philosophy and religion, the supernatural and the mundane, is ambitious enough to stand out on network television while remaining true enough to the comfort-food form to not feel alienating. It’s in the sweet spot halfway between familiar and challenging — just enough of both to please all comers, or at least most of them.

The pilot introduces Dr. Kristen Bouchard (Katja Herbers), a mountain-climbing mother of four daughters (Brooklyn Shuck, Skylar Gray, Maddy Crocco, and Dalya Knapp) whose husband is away shepherding people up Everest. We meet her in Evil Episode 1 as a forensic psychologist working for the district attorney’s office, her mandate being to determine whether defendants are sane enough to stand trial. But when her latest subject shows evidence of being possessed by a demon, she’s inclined to join forces with trainee priest David Acosta (Mike Colter) and his handyman skeptic partner Ben (Aasif Mandvi), who work on behalf of the Catholic Church on a backlog of half-a-million cases of potentially supernatural mysteriousness. And just like that, we have a weekly format. 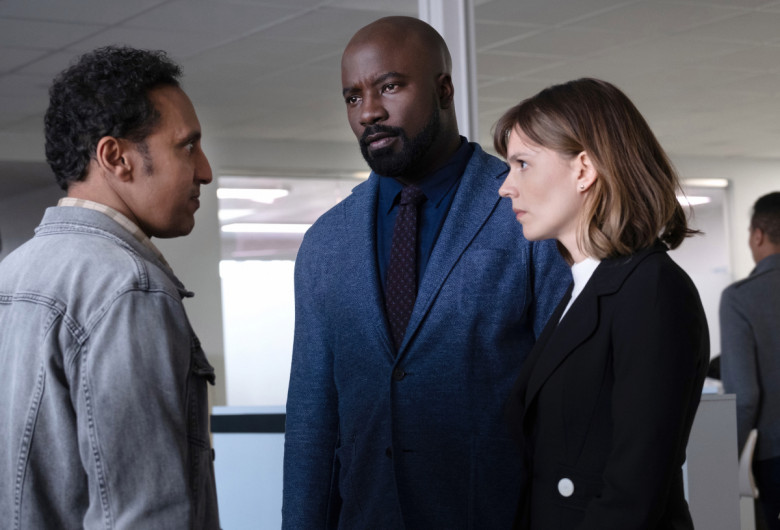 The reason this works is that it gives equal credence to both the potential of faith-based explanations and the likelihood of mundane realities — Ben’s whole thing is figuring out that most instances of demonic whispering are just things wedged in appliances, and so on and so forth. But the show never looks to condemn or ridicule any potential outcome, so there’s always a sense that you never quite know where things are going, and this tends to manifest as the characters’ having their faith or worldview routinely challenged.

The dynamic within the team, then, becomes obvious pretty much immediately in Evil Episode 1, and it’s an engaging clash of ideologies with an interesting underlying sexual chemistry between Bouchard and Acosta. The pilot contains breadcrumbs of serialization, with the vague mention of an enigmatic conspiratorial group by itinerant evildoer Leland Townsend (Michael Emerson) giving things a “more next week” quality, but the case presented in the pilot is engaging on its own terms. There’s a lot here — from Kristen’s absent husband and her chaotic homelife to Acosta’s literal and figurative demons — that feels ripe for exploration as the series progresses, and as long as it can maintain its fresh fusion of scares and laughs it’ll be a real standout in the weekly lineup.

1 thought on “Evil Recap: Believe It Or Not”