Holiday Hell Review: A Mixed Bag Of Horror For The Holiday Season

An anthology with four tales of terror from a shopkeeper and his customer late on Christmas Eve.

An anthology with four tales of terror from a shopkeeper and his customer late on Christmas Eve.

In this anthology, we get four short stories with one ‘wrap-around’.  The wrap-around involves a mysterious curiosity shop run by Jeffrey Combs’ character (The Shopkeeper), a woman enters the shop on Christmas Eve looking for a last-minute present for her sister. The Shopkeeper has a story behind each item and as he weaves tales of killer dolls, witches and psycho Santas, the woman senses she might be in danger. She has until midnight to choose her gift, but will she choose wisely?

Combs is thankfully as charismatic as ever, and although he doesn’t feature in any of the shorts, his segments at the beginning and end of the movie, as well as in between each segment, take up a good chunk of time and he is highly entertaining in the role. There’s a definite and I assume deliberate Gremlins-vibe to these scenes.

The first segment is Dollface. On the site of past murder, a group of teenagers invades an empty house to party, only to be killed off one by one by the aforementioned Dollface. It’s a very typical slasher formula and there are no real surprises. But there are some positives. I liked that a deaf character was involved using sign language — something that movies don’t do enough of. The look of Dollface, while not particularly original, was quite cool, definitely Asian-horror influenced. And finally, there were some cool-looking death scenes involving practical effects. 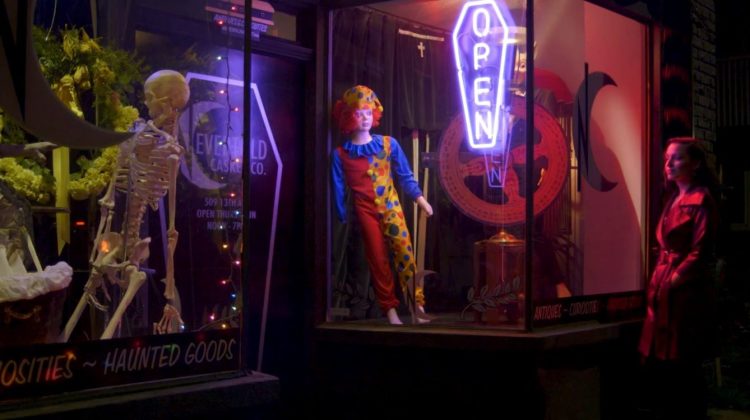 Segment number two is titled The Hand That Rocks The Dreidel. Set during Hanukkah, a little boy receives a Rabbi doll as a gift. It is easy to see where this is going and even more so when the boy’s babysitter starts talking about stealing from the house. Once again, the highlights of this segment are the death scenes which are nicely gruesome and look good.

The third story comes in the form of a downbeat office worker who decides to take some of the pills he is selling while dressed up as Santa. This segment at least feels a bit more Christmassy and has veteran actor Joel Murray to carry it.  He is great in the Silent Night, Deadly Night/Christmas Evil rip-off but the short isn’t as good as it could have been.

Last but not least is the segment Room To Let, told by the customer. Probably my favorite because I thought the acting and story were the strongest. Influenced by movies like Get Out, it is still maybe a bit too obvious where it is heading but despite a lack of gore, I enjoyed it.

The final shopkeeper and customer segment links everything up nicely and proves a fitting conclusion.

Holiday Hell is perhaps most disappointing because it doesn’t feel like it is set at Christmas at all; infact it didn’t need to be, so with a title like it has I wanted snow and Christmas trees and Christmas lights and so much more. What I got is some predictable, sometimes entertaining stories. If you like Christmas horror movies, maybe put Holiday Hell on your Christmas list… just not right at the very top.