Sure, it doesn’t quite live up to the original cult-classic or have that same legendary, scene-stealing cameo, but Zombieland: Double Tap more than delivers enough hilarious, heaping portions of gut-busting laughs to keep the ravenous fan base that has been jonesing for a sequel for nearly a decade satisfied.

Sure, it doesn’t quite live up to the original cult-classic or have that same legendary, scene-stealing cameo, but Zombieland: Double Tap more than delivers enough hilarious, heaping portions of gut-busting laughs to keep the ravenous fan base that has been jonesing for a sequel for nearly a decade satisfied.

So, that’s where all the summer fun has been hiding! Since the end of this season’s big heat — or: “when studios pay their bills” — has been a serious cold front of dull, lifeless, cardboard cut-out Hollywood action adventures that were equivalent to a couple of Flatheads thrown against a bedroom wall; the City of Angels’ greatest industry went back to that well to bring us the long-awaited sequel to the 2009 gut-buster (pun intended) Zombieland. Yes, sequels may be the crutch of originality, but when done well, they can transcend the term guilty-pleasure into how popular film stardom is made. Think about it: what movies from the ‘80s are your go-to watch, or what makes you immediately stop, then finish it until it’s over? Zombieland was the equivalent of those era’s best; they may be artless, but are cult or full-blown classics now, and while the great tinsel town machine churns out sequels before the originals end their initial runs, the team behind the original took nearly a decade and made sure their time was well spent; even though if this gory comedy may eventually waken the left to how naturally a right-wing movie this actually is.

Zombieland: Double Tap brings the gang back together, as the four seasoned zombie killers have kept slaying their way through the living dead the way Netflix kills off their original series content. While the first film centered on introducing the characters and establishing their motivations, the sequel puts us in the middle of their mutual respected relationships that have grown with each passing year. They have all now taken up residence, basically squatting, at 1600 Pennsylvania Avenue; wrapping up gifts in oil paintings of presidents (Don’t worry. One was of President Taft, “the fattest president”). Columbus (Jesse Eisenberg) and Wichita (Emma Stone) are, assuming they aren’t a new hot item since Stone’s dating pool has narrowed down considerably since the virus has spread, an item, knocking boots under the watchful eyes of Honest Abe. Tallahassee (Woody Harrelson) has taken up the father figure role for Little Rock (Abigail Breslin), who thinks he is so overbearing she would rather run off into a field of the undead then be around him for another second. The same goes for her sister, who takes off with her after Columbus wants more of a commitment from her. Unfortunately, just like the flu, they encounter zombies that have adapted into something even harder to kill, making the double tap strategy a rule that is a thing of the past.

Ruben Fleischer (Venom) is back behind the camera, and his film begins at a mildly slow start, where you may be initially afraid that you might see a rehash of the same shtick that was done a decade prior. The key, though, to any sequel, is not just how to create new and engaging characters for the holdovers to interact with, but how they fit and respond in the framework that became popular. Double Tap’s strength is just that, with side characters not being given too much of a burden to carry, while supporting the established leads. The insatiable Rosario Dawson, who you can never get enough of, is perfectly cast as the tough as nails, cutthroat business owner of an Elvis-themed motel, who takes a liking to Harrelson’s “Sunshine.” The brilliant bit of dual play between Eisenberg and Thomas Middleditch is inspired, so much so the Silicon Valley star must have studied Social Network for endless hours during countless days to get his mannerisms just right. Even Luke Wilson, who as soon as I saw him on the screen made me picture taking a full star away as the Variety critic did for Johnny Drama in Entourage, manages to hold his own as Tallahassee’s spirit animal, Albuquerque. 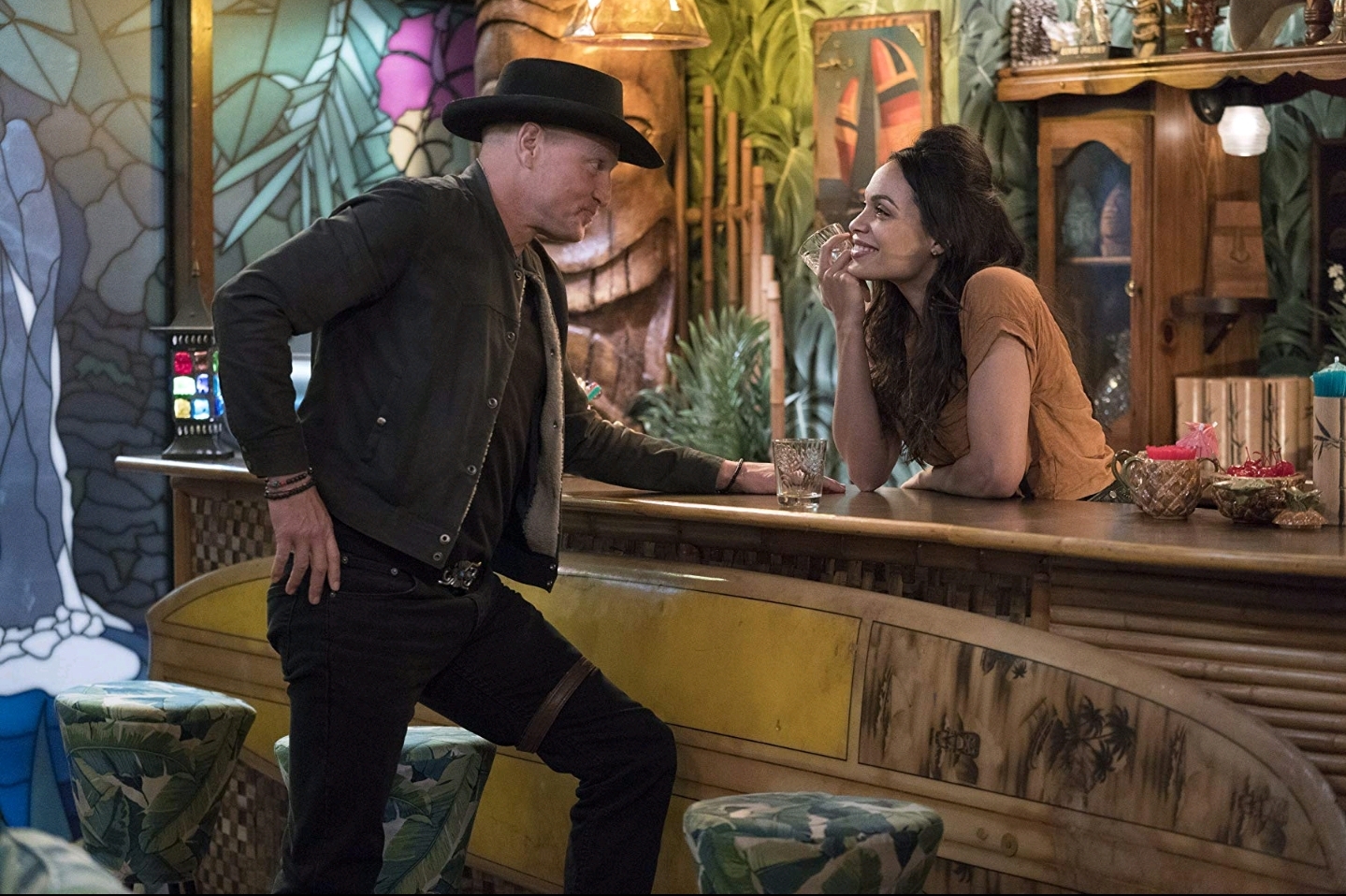 The real scene-stealer of the film though is up-and-coming and on the verge of superstardom Zoey Deutsch; she has quietly built up a nice resume the past few years in a variety of films since her days as a spoiled rich kid in the quickly canceled Sarah Michelle Geller CW vehicle, Ringer. She plays Madison, a college sorority sister type who appears to not have survived on her wits but on pure dumb luck and an endless key chain full of mace. Sure, it’s a cliched character part for sure, but she steals the film as an albeit cartoonish, over the top modernized ode to Marilyn Monroe in Some Like It Hot. She shows a real knack for comic timing here, whether it’s a perfectly delivered line played off the main cast or physical sight gag, she’s the breakout character this zom-com needed to get its sea legs back. I’m excited to see where her career is headed, including the indie-film, Buffaloed, that’s currently on the festival circuit.

As I mentioned before, Zombieland: Double Tap‘s first act may need a few minutes to get its bearings, and of course, it doesn’t have that killer cameo that made the former so special (Emma Stone still takes a moment to flash that intoxicating laugh in a scene which wins over men and women alike). Fleischer’s film does get repetitive when it comes to its rules, especially when you considered it had years to come up with a few new ones that Columbus hasn’t gone through yet. Speaking of time spent, considering the years that have passed, how different the United States actually is since the Obama Administration and the current leaseholders. Watching these films now, it’s obvious how much the world and the character’s actions are actually right-wing. In this chapter, when this group meets a contingent of pacifists, you might ask yourself, would you like to kill zombies with love or a double-action sawed off? I’m interested to see if the film, while not as satisfying as the first, but it’s close, will still gain positive reviews with the left because of it. In the end, covered and wrapped in a cloak of blood-soaked gleeful and gory comedy, happiness is a subtle message about both sides working together; hopefully, both can put their smartphones and their snark cannons down to enjoy a good old-fashioned guilty pleasure again.

At least, that’s the message I hope the three pre-teen children (who couldn’t have been older than eight), and the infant baby learned who were let into the screening that I attended. No joke, I’m still wondering how much this may cost these parents in therapy sessions in the future.