Home » Film » Knives Out Review: One Of The Most Entertaining Movies Of the Year.

Knives Out Review: One Of The Most Entertaining Movies Of the Year.

Rian Johnson’s Star Wars follow up is an exciting whodunnit with a lot on its mind.

Rian Johnson’s Star Wars follow up is an exciting whodunnit with a lot on its mind.

The word “spoiler” has proliferated in the past few years. Once the domain of nerds on the internet, the word is now uttered by major studios. The concept of “spoilers” relies on the premise that enjoying the movie is dependent on not knowing what will happen — an argument that holds very little water, given the rate at which fans will rewatch so-called “twist” movies (as well as the length to which many fans will seek out spoilers). In fact, a movie having “spoilers”, is often little more than a marketing ploy designed to break opening weekend records amidst a deluge of ticket sales. If a movie can be spoiled — the logic goes — you must see it as soon as possible. Amidst this culture of “spoilers” arrives Rian Johnson’s Knives Out. Johnson, coming off one of the best blockbusters in recent memory (and one with enough twists to earn the possibility of there being “spoilers” — although which is just as good, if not better, upon rewatching), began the screening I attended with a recorded message urging the audience not to reveal the movie’s twist.

Knives Out is a whodunnit, and thus the film superficially hinges on locating the identity of the “who”. In my opinion, Johnson’s message was over-cautious. He has constructed a film so clever and confident that simply knowing “who” would ignore the how, and the process of how the characters in the film get to that how. And most of the fun is in the ride the film takes you on.

Simply put, Knives Out is immense fun. Part of that fun is figuring out the mystery, but the film takes such interesting directions that the pleasure is in the ride itself. The script somehow always stays one step ahead of its audience. Sometimes it plays a card much earlier than you expect it. The clues are placed in plain view but are cleverly obfuscated by the simple emotional heft of the story. 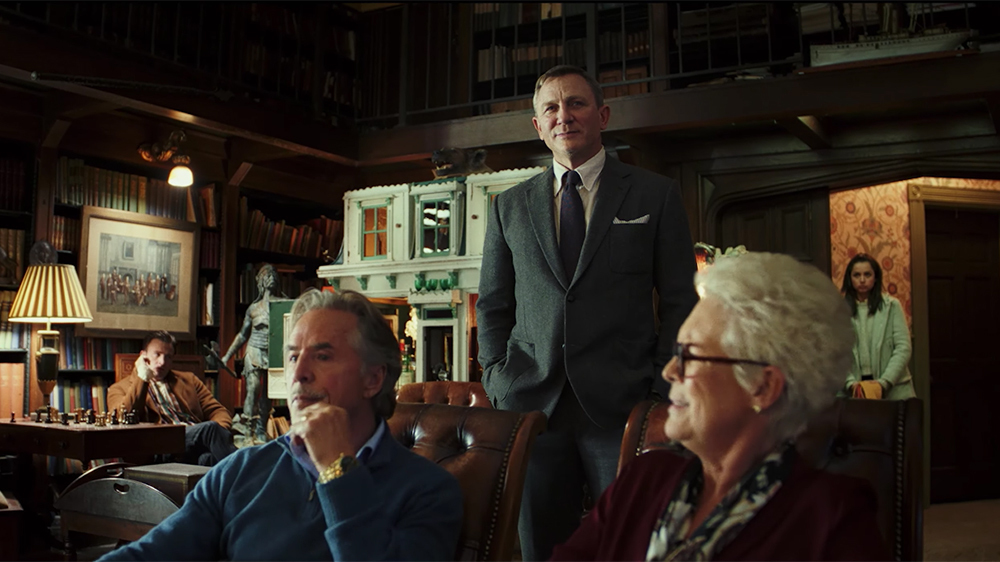 Celebrated crime novelist Harlan Thrombey (Christopher Plummer) is found dead, apparently by suicide. His family (an all-star cast, including Chris Evans, Jamie Lee Curtis, Toni Collette, and Michael Shannon, among others) gather to be interviewed. Joining the police (Laiketh Stanfield and Noah Segan) is a private eye — the delightfully named Benoit Blanc (Daniel Craig). The cast are a delight to watch. As Blanc, Craig sails down what Kenneth Branagh would call “the river of ham”. His detective works in a manner he refers to “Gravity’s Rainbow” theory of detecting, named after Pynchon’s novel (“nobody’s read it, I just like the name”, he says). Like the arc of the rocket, so fly the clues. Plant yourself in the right spot and the answer will come circling back at the ground.

The theory could easily describe the narrative of the film, which takes a second act shift that completely renegotiates the audience’s relationship with the mystery. This bold move is Johnson’s masterstroke (he also wrote the film, and co-produced it with his frequent collaborator, Ram Bergman). The form of the whodunnit is used to tell a complex tale of the depravity that comes with inherited wealth and white privilege. An interview scene in the begging cross-cuts between family members, establishing their personalities, their dynamic, and the facts of the case in an efficient and amusing manner. Johnson gives us so many shades of awful; I found myself trying to admire those who showed decency, only for them that to be undercut by an awful deed committed later on. They may not be guilty of murder, but even the grandchildren are rotten to the core.

Ana de Armas shines as Marta, Thrombey’s nurse. Marta is incapable of lying without vomiting; a tic that is used equally for comedy and drama. Through the depiction of Marta’s interaction with the Thrombey’s, Knives Out functions as a damning critique of the upper class. The film’s real twist is how much more it has on its mind than being a simple whodunnit.

But as a simple whodunnit, it nevertheless excels. Knives Out is the best type of crowd-pleaser; one intensely tuned in to the current political movement and on making the audience open their heart and look at the cruel systems around them, while never forgetting to tell a thrilling story. The end of the film culminates in a final shot as close to perfect as anything I’ve seen all year and left me grinning for hours afterward.