On the day of launch, Apple TV+ released The Morning Show Episodes 1-3. Please see below a comprehensive recap and review of the first three episodes. 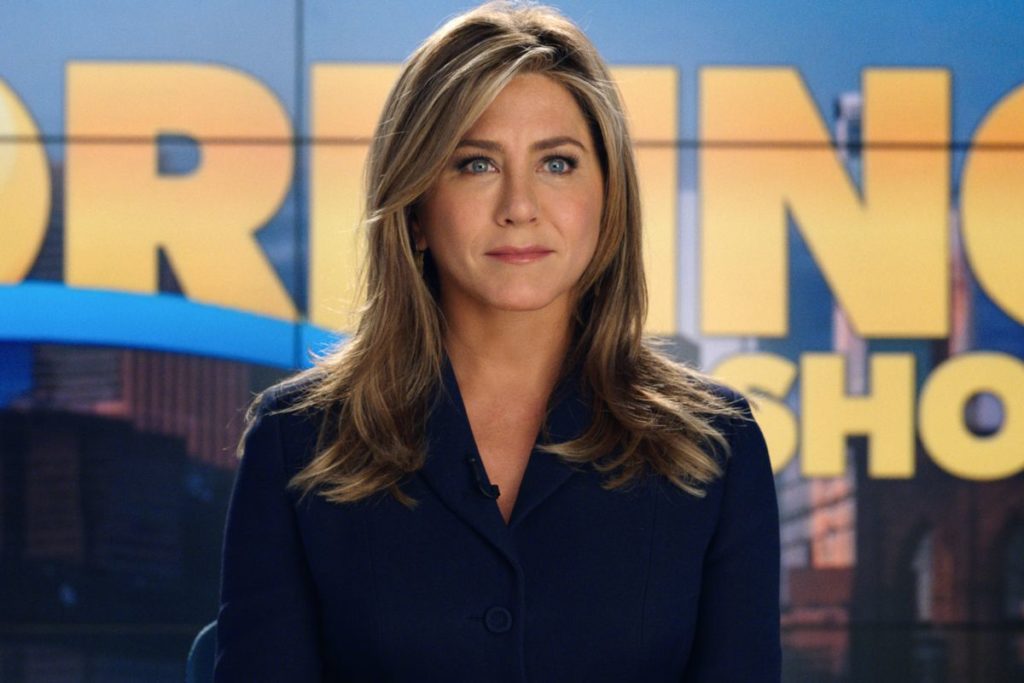 The first episode of The Morning Show starts with the anticipation that something is going to go wrong. Mitch Kessler (Steve Carell) and Alex Levy (Jennifer Aniston) receive an early morning phone call relating to that show on Network UBA. The bad news has been delivered, Mitch Kessler has been fired for sexual misconduct. He has been wrapped up into the #MeToo scandal.

It’s clear that Alex is upset about losing her 15-year show partner overnight, but she’s equally angry that she was not kept in the loop before the news was delivered. Chip assures Alex that he kept it away from her to protect her career.

With the scandal brewing on The Morning Show, SENN Conservative Correspondent Bradley Jackson (Reese Witherspoon) is delighted over the news that Mitch is fired before heading to a coal mine protest. A mine is reopening and it has caused an uproar. While trying to interview one of the protestors, a man knocks over her cameraman. Bradley is enraged and delivers a passionate outburst to the man, discussing facts and raising questions. She didn’t know she was being recorded.

For The Morning Show, Alex suggests to Cory that they do the opening based on “family togetherness”. Alex delivers her opening; she describes how they are all shocked, disappointed and upset. Mitch watches it live from home, and he believes he is getting thrown under the bus by Alex. Mitch is fuming and claims all his affairs with The Morning Show staff were consensual. His anger consumes him and he destroys his television. It gets worse — his wife Paige divorces him.

Bubbling underneath this though, Cory suggests firing Alex to Chip in a wonderful monologue-type performance by Billy Crudup. He delivers a cold line: “No-one wants to see the widow getting f–ked”.

In a surprising turn for Bradley, despite her boss being angry at her for her outburst that has surfaced on YouTube, The Morning Show asks her to come on for an interview to demonstrate powerful women. The night before, Bradley has family issues — her brother is a drug addict and she is trying to convince her mother regarding the financial and emotional pitfalls that are caused by helping her brother.

The next day, Alex interviews Bradley. Before it starts, Bradley offers Alex her condolences regarding Mitchel but Alex quickly brushes it off. During the interview, Alex plays the video of Bradley’s outburst, and then surprisingly proceeds to attack her. Alex questions which side she is on politically and whether she has used the outburst to her advantage. Bradley handles it well, with UBA staff in the background asking Alex to keep her cool.

Episode 1 ends with Alex finally meeting Mitch, and they have an emotional conversation that involves plenty of complex arguments. Mitch tells her that UBA wanted to replace her, but Alex refuses to believe it. Episode 1 closes with Cory ringing Bradley with a proposal.

This was a thrilling opening with Emmy-worthy performances.

Episode 2 – A Seat at the Table 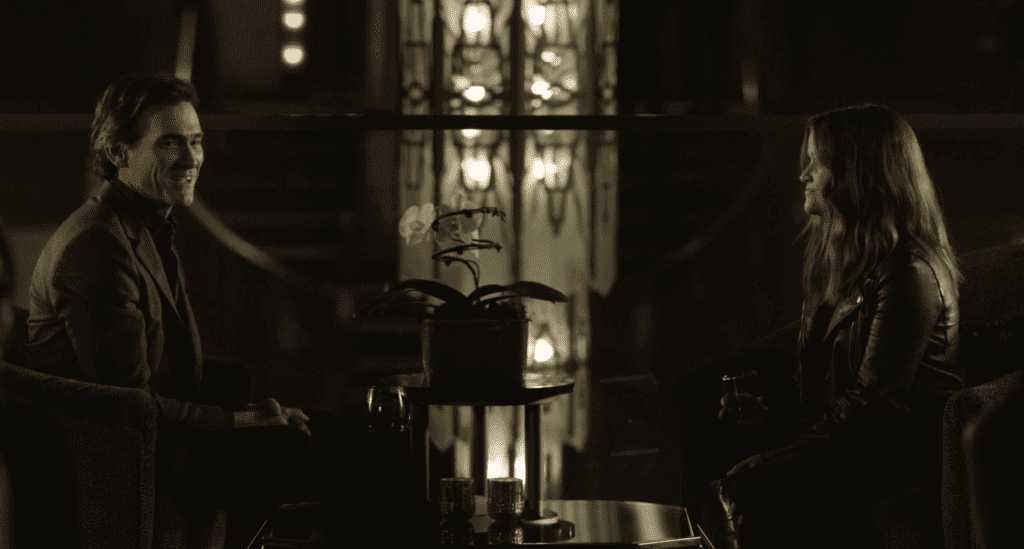 Episode 2 sees Apple TV+’s The Morning Show go from strength to strength. It opens up with a rendition of Radiohead’s “Creep” at an intimate event. Cory and Bradley have a casual chat, where Bradley describes herself as not “fitting in a mold”. Cory likes what he sees, and asks if she would like to become a field correspondent for The Morning Show.

While The Morning Show readjusts for the future, Mitch is struggling to adjust to his new life. He wakes up automatically at 03:30, his usual awakening. He checks his empty kid’s room, and bursts into tears. Alex is also feeling detached; she rings Sarah and asks if the delay in her new contract is a way for the network to get rid of her — Cory insists he will not give Alex co-anchor approval.

And bubbling beneath this story is a relationship within the workplace of The Good Morning Show. Yanko and Claire have a physical relationship, stowed away in a private office. Yanko is worried because Claire is half his age and his P.A.

Alex’s anxiety increases in Episode 2. She walks off stage before air and tells Chip she isn’t going to host unless she gets co-anchor approval. With seconds on the clock until the show goes live, Chip half-heartedly agrees to push for co-anchor approval.

From the request of Cory, Chip interviews Bradley. She asks if she can correspond and produce her own stories, which leads to a heated argument between the pair. Bradley walks off.

With Mitch down in the dumps, he meets his business manager who states he has no chance because he violated the ‘morals clause’. Mitch insists he is going to fight for his life to turn this around. Soon after, a random lady in the street calls him a rapist.

Before a black-tie event, Chip meets Mitch for a chat and tells him to stop calling reporters. Mitch says he is not going to hide and he will go to the black-tie event. Mitch asks Chip what he is going to do when they go after the “ordinary man”.

At the black-tie event, Alex is emotional and nervous, knowing all eyes will be on her. Chip tells Cory that Bradley will be a bad idea, but Cory puts Bradley on the same table with Alex. The game-playing makes everything awkward between the two women. Bradley approaches Alex in the bathroom and apologizes, stating she did not know Cory would do this and she feels awkward. Alex wryly asks, “If you felt awkward, why did you stay on the table?”.

Cory tells Alex that co-anchor approval is not on the table before she is about to accept her award and deliver a speech. Alex makes it clear that she is going to walk away from the show, and Cory cruelly replies, “We bought this award for you”.

At the end of Episode 3, Alex males her award speech, apologizing to the victims and dedicates the award to women. Alex then puts fate into her own hands, delivering some “exciting news”. Alex announces that there will be a new Morning Show co-host — Bradley Jackson.

Episode 3 – Chaos is the New Cocaine 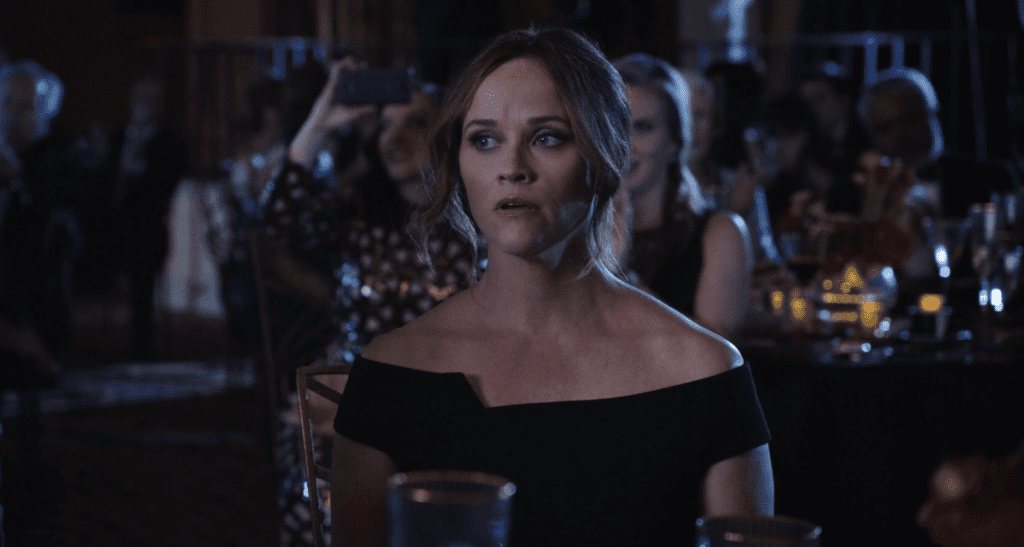 Following on from the previous Episode, all eyes are on Bradley Jackson in The Morning Show. It was a fantastic power move by Alex, forcing Cory to act slightly panicky. Cory has no choice but to confirm the shock announcement — Bradley Jackson is the new co-anchor, and the press run with it. Bradley has doubts, claiming, “I’m not that kind of conservative”.

But Alex’s power-play puts the network under pressure. Their true intention was to get rid of Alex, but Cory assures the boss, Fred, that they can push Alex out eventually. Cory likes this new phase — “Chaos is the new cocaine, Fred!”

Alex comes out with a thought-provoking line while driving away with her family from the black-tie event. She says, “sometimes women don’t have control, so they have to take it for themselves”. The Morning Show is playing the heavy theme of “it’s a man’s world” with women fighting for their own stake.

While Mitch loses his agent, his life collapsing even further, Alex is sent to the board room and shouted at by Fred in front of all the executives. She slams her glass of water down and states that America loves her and she is propping the show up, keeping it safe. Alex continues to tighten her grip on her new power.

The next day, Alex and Bradley talk in the studio and Bradley is not happy with the turn of events. Bradley states she is not a perky person and she does not like being used. Alex half laughs at her suggestion and tells her to take advantage of the situation. The women have 48 hours to prepare for the next Morning Show.

Alex wants to be all eyes and ears and attends the weekend prep, which includes interviewing Mitch’s victim Asley. Chip wants to understand why Alex wants to do that interview. Alex addresses the elephant in the room regarding Mitch and assures the team she will do the interview.

A now desperate Mitch asks his friend, who has also lost his career due to a scandal, if he would like to film a documentary where they interview their accusers. The conversation takes a dark turn, with Mitch’s friend going deep into the accusations against him, and sounding like an actual rapist. Mitch realizes at this moment that he does not feel he is the same as his friend in the situation and declares, “you are actually a predator”.

Episode 3 ends with Mia speaking to Alex about interviewing the victim and how it does not serve her well as she was close to Mitch. Mia warns it will come back to bite Alex. Bradley learns that Alex is not attending rehearsals and is also giving the interview with Ashley to her. Bradley chases after Alex and accuses her of playing games. Alex assures her she just needs space and time so she can prep for the next day. The next day arrives, and just as The Morning Show is about to start, Alex grabs Bradley’s hand and says “don’t f–k it up”.

Ready Steady Cut will be providing coverage on Apple TV+’s The Morning Show on a weekly basis.