For a war film with a deep emotional scope of one of the most important battles the world has ever known, you’ll have to watch… well, there isn’t one. Until then, Midway is your CGI-filled, mildly suspenseful, poorly-written substitute that at least honors real-life American heroes.

For a war film with a deep emotional scope of one of the most important battles the world has ever known, you’ll have to watch… well, there isn’t one. Until then, Midway is your CGI-filled, mildly suspenseful, poorly-written substitute that at least honors real-life American heroes.


Midway has your classic throwback characters that are like talking toy dolls that, when you pull the string back, they will spew out such classic lines as, “Oh Boy”,” Give ’em Hell,” and a somber, “He was a good man…” In fact, almost every scene ends with so much damn virility the camera pans and pauses for such a brief moment I thought all the actors were holding to be on the cover of Time magazine. That being said, I have a soft spot for most films that try to honor our veterans, especially ones that have the intention of highlighting the achievements of America’s greatest generation. Even more so when they are actual, real-life American heroes, especially considering today’s generation look up to pro-athletes, Hollywood stars, or worse, the social media-reality types. This film is about when men were men, all handsome, in uniform, and not one has a sign of male pattern baldness (I’m still debating if Woody Harrelson was fitted for a wig or CGI). None of the pilots have wind puffing up their perfect cheekbones in midflight and certainly, no one’s blood pressure is up when under attack from enemy fighters. You greet each man with a handshake, not a hug, and women, when worried, knew how to hide in a bathroom when distraught, and use the door for that shoulder to cry on. While sitting in the theatre, I was sure most men wanted to be them, and most women wanted to do them. Hell, when I watched Dick Best dive bomb a Japanese destroyer and then turn back and go at them one more time as if he was returning a few rounds of blazing hot lead he borrowed last week, I briefly considered giving my wife a hall-pass for him that night; only him, though.

That, though, is the problem I have with Roland Emmerich’s Midway, the mercurial, big-screen action director, whose new film is much more Independence Day than Saving Private Ryan. These CGI special effects are great to look at, gorgeous even, but cartoonish because so much of it is computer-generated. You never have the feeling that if you reach out, you could touch a live-action plane; this is Star Wars, but now instead of Star Fighters and Y-Wings they are Aichi D34 Carrier-Borne Bombers, Douglas SDB-3 Dauntless Dive Bombers, and Douglas TBD Devastators; the carriers and destroyers are Star Cruisers and Death Stars. The film though, you are talking about a film which is so heavily invested in flight and vintage aircraft that it does an admirable job. The team here does build up a certain amount of suspense and thrills; mainly, the dive-bombing scenes gave me a sense of awe-struck pride and amazement. It’s almost the equivalent of a child playing with a toy plane, and making bomb noises with their mouths as they send the plane towards the mother’s carpeted family room floor (not the living room floor, that’s the room always marked off for “company”). The film’s scripted dialogue is recycled from war films of its own ilk multiple decades before, even though I was slightly relieved when they did acknowledge sacrifices on the other side of unseen events by civilians. 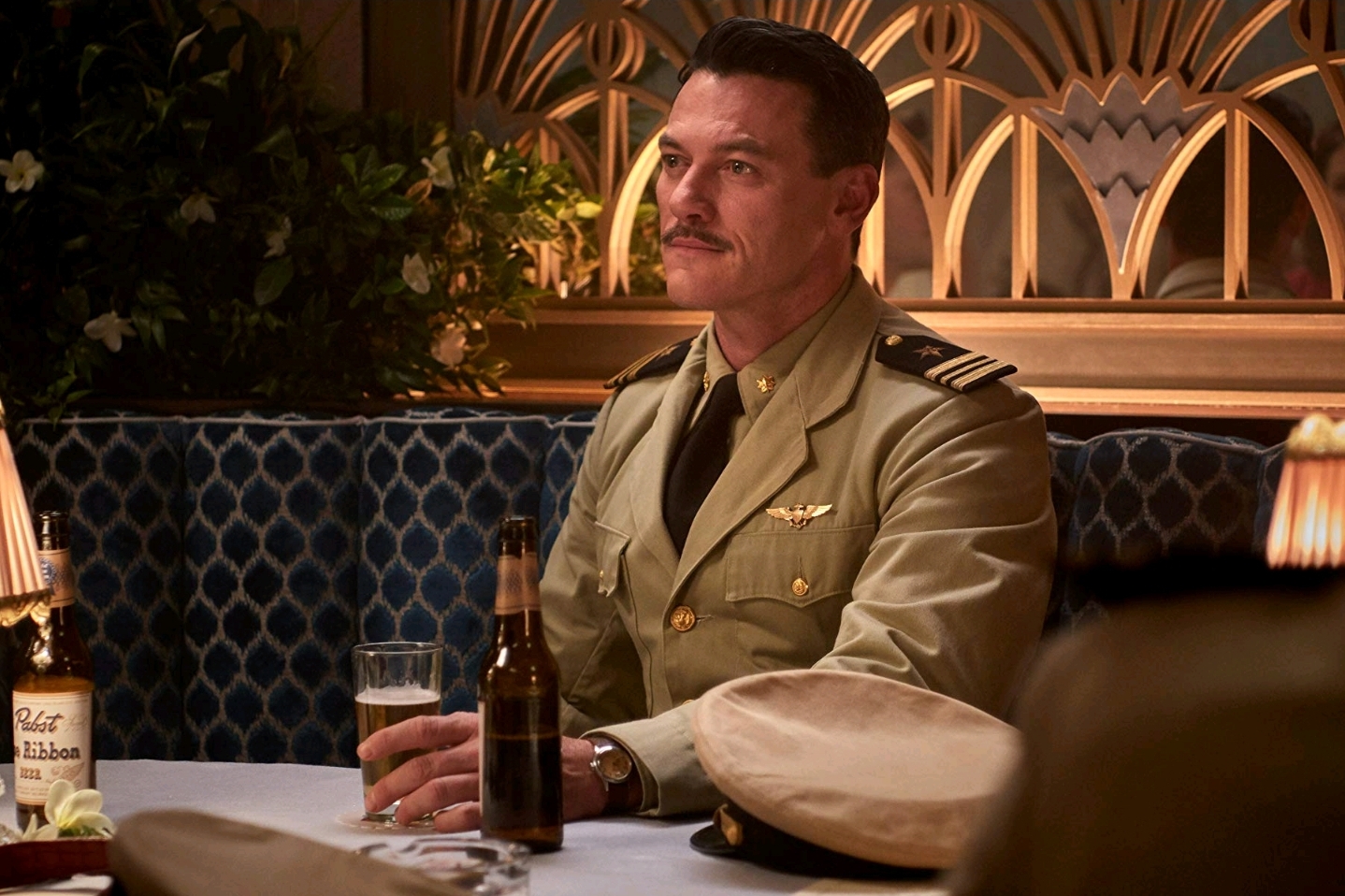 Midway touts its long list of notable actors, but there isn’t a huge film star in the group. Which is fine, although Mandy Moore, who plays the wife of Ed Skrein’s Lieutenant Best, Anne, is too lightweight an actress to be a female lead in any film, even if the character is so underwritten and the kind of spunky cardboard cut-out that there is really nothing to do with. Of them all, Nick Jonas would bring your biggest star wattage, but his performance as a real-life legendary Aviation Machinist Mate made me think he studied the cabby with an accent from the big apple on The Simpsons; immediately, I thought he may be a front-runner for a Razzie, but the man he is playing is such an American Hero I’ll forgive him. Still, for a character that had a shorter screen time than I thought, Dennis Quaid’s grizzled, weathered, and covered with shingles turn as Vice Admiral William “Bull” Halsey is the most fun and interesting.

Whatever you want to say about Midway, the men, and women who made it had their hearts in the right place. Each passing generation doesn’t have an appreciation of the history, and the sacrifices made by these brave men who allowed us to do whatever we ever dreamed possible. There is nothing wrong with wanting to go see it, especially teenagers, but this is the type of history lesson that is the equivalent of How A Bill is Made in Schoolhouse Rock (heck, that still helps me out today). If you are looking for a thoughtful, complete film, with a deep emotional scope of one of the most important battles the world has ever known, this isn’t it. For that, you would have to watch… well, there hasn’t been one yet. The veterans, their families, and any history buff deserve a film that takes that time and perspective for the Battle of Midway. Attention Steven Spielberg and Tom Hanks, I beg you, Lieutenant Richard “Dick” Best, Lieutenant Commander Edwin T. Layon, Lieutenant Commander Wade McCluskey, Lieutenant Colonel Jimmy Doolittle, Admiral Chester Nimitz, Rear Admiral Raymond Spruance, Commander Joseph Rochefort, Chief Aviation Radioman James Murray, Lieutenant Roy Pierce, Lieutenant Commander Eugene Lindsey, Aviation Machinist Mate Bruno Gaido, and Anne Best deserve more from Hollywood. Until then, Midway will have to settle for a big-budget, CGI-filled, slightly above-average, mildly suspenseful, but poorly-written substitute that does an admirable job of honoring its subjects.