Creeped Out Recap: “No Filter” Taps Into Teen Obsessions

Like it’s never been away, Creeped Out returns with a contemporary Twilight Zone-style episode in a cautionary tale for our times.

Like it’s never been away, Creeped Out returns with a contemporary Twilight Zone-style episode in a cautionary tale for our times.


This Creeped Out Season 2 Episode 6 recap for the episode titled “No Filter” contains spoilers. You can check out our thoughts on the previous episode by clicking these words.

“No Filter”, the first Creeped Out episode after the mid-season break, explores family bonds and family differences via two teen obsessions: technology and self-image. Kiera (Imogen Paires) is the popular sister and Marcy (Shanice Archer) the sensible one in this busy, modern family. They both help in their father’s restaurant, and both show an interest in the same boy, while they have different strengths and different interests: Kiera is obsessed with selfies and social media, and Marcy threatens viruses on those who leave the restaurant a poor review. All the family is dedicated to each other though and agree on one thing: whether in or out of work, reputation is everything.

When Kiera downloads a new app that promises to “take the best of you” when it comes to selfies, she finds out her self-image comes with a price, and she calls on her sister’s tech-savvy to get her unstuck… if possible. 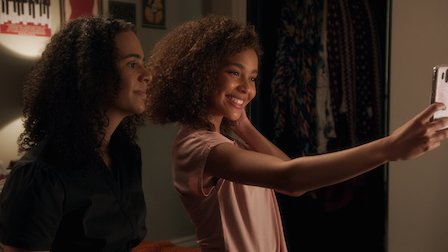 Directed by Simon Hynd (British TV regular), his first of two Creeped Out episodes, the tension builds very smoothly, thanks to a believable family and especially well-drawn teen characters. The contrasting approaches to technology capture modern obsessions in a nutshell, and although the app itself is clearly a caricature, it’s easy to recognize the type: annoying tone, frequent notifications, and lengthy terms and conditions. You know the sort, especially if you’ve seen Countdown at the cinema recently. Breaking the T’s and C’s may not be fatal in “No Filter”, but the consequences could be worse, in a very surreal and sinister way.

Talking of sinister… just wait until you see the baddie! Richard Brake has been in countless films and TV shows, playing criminals, dead people, medieval roles and mystery roles; one of those faces which are bound to be familiar, though you may not know where from. And he is perfect here, lending the right gravitas and menace to his pivotal part.

Creeped Out co-creator Rob Butler has written a contemporary Twilight Zone-style episode, with twists and turns to the plot, the clever character trying to outwit the villain and a couple of Woah! moments. The only thing which lets down Creeped Out Season 2, Episode 6 is slightly below-par special effects: there is one device done well in a season one episode which was applied lazily here.

But there’s no doubt the episode is effective: my son who watched it with me won’t be careless with what he installs in the future.