Creeped Out is an anthology series for and starring kids, with a different fantastical topic/setting each episode. The series was created/written by Bede Blake and Robert Butler, directed by Steve Hughes and Bruce McDonald, and is a British-Canadian collaboration. It aired from October 2017 to February 2018 on CBBC (UK) and the Family Channel (Canada), and is thirteen episodes long.

Blake and Butler were reminiscing about Amazing Stories and agreed there should be something new to get kids talking, and get stuck in their memories. Creeped Out was the result, an anthology series of creepy stories featuring everyday, relatable kids. Some of the episodes are pure creepy horror, some are more like campfire stories, some surreal, and at least one has a Black Mirror tone about it. What links the stories is a masked character known as The Curious, who apparently collects strange stories; but apart from him (or her?), each one is unique.

If you have children who hear you raving about the dark humour in Inside Number 9, or reminiscing about favourite Twilight Zone episodes, let them watch one of these in the meantime. I reckon they are best suited to kids aged between about eight and twelve; but if they find the episode too intense, just pause it until they’ve gone to bed, and then carry it on without them.

Here’s a bit about what to expect…

Here, we have an ordinary adolescent, who is utterly fed up with her ordinary parents. Hands up who’s not known that feeling? 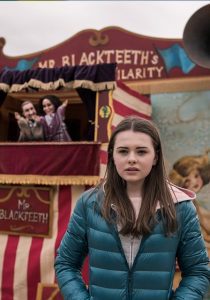 She bumps into a boy who says he knows someone who can help… introducing Mr Blackteeth… my new favourite villain.

This episode has shocks and twists and is a terrific opener for the series.

A Vertigo-style story about a boy spending the day alone who has suspicions about his neighbour. This was our least favourite, unfortunately, because the explanation was told verbally, rather than having it revealed on the screen for all to see.

Nevertheless, worth watching for a brand new mythological monster, and a chilling conclusion.

Chat rooms aren’t like real rooms, surely? What you say there is just playing around; can’t really hurt…

A public school student who is shy on the outside, but like another person online, finds his secret persona comes with consequences.

This is the story which smacked of Black Mirror, as the creepiness was purely about where technology might go, with nothing supernatural added. About how close kids can get to their electronic devices, and the risk that those “friends” – by their side constantly – can become more important and influential than real friends.

A bittersweet story about familial bonds, wormholes in time and the lure of a high score. 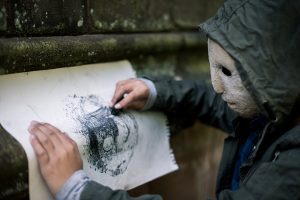 An unusual story about a girl who struggled to find her place amongst her peers. Thought-provoking, rather than creepy, and with some rather nice special effects.

Now this one was creepy… our Smallboy kept debating whether to switch it off or not, and then struggled to sleep! But he loved it. About music and nature and teamwork… and about kids that go camping in a wood where they just know some haven’t returned from! 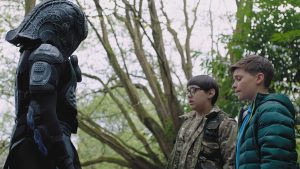 Reminiscent of E.T., this episode was about whether and how to send a visitor back where they came from. 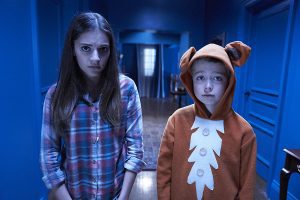 We’ve all seen horror films about babysitters in some sort of trouble… Scream, When a Stranger Calls Back, and – of course – Netflix’s The Babysitter. This babysitter considers herself to be the best, and uses every ploy to ensure she has very little work.

The story reminded me very much of Neil Gaiman’s story Click, Clack the Rattlebag… but it turned out to be quite different. 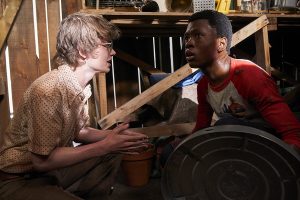 Clearing out unwanted belongings from a relative’s (huge!) shed is more difficult than it should be, as there is something strange and dark living there…

A story about karma, and a mysterious blue-skinned character who freezes time to deliver it.

This one provoked lots of discussions about what the kids should do to resolve the situation they found themselves in, and whether they deserved it.

Our Smallboy’s favourite story… not sure if it was because it was in two parts (the only story which was), or because it was a great way to end the series, or something else. But we snuggled up to watch it together as soon as we could, and the week-long wait paid off.

This was about a carnival whose host held a great power over the performers who worked there; and about what happened when one tried to make their way home.

One common theme in this series is working with others to resolve a problem. I think overall, looking back on the whole series, that the kids who sort things out on their own get caught out. There are some varied and interesting friendships and family bonds; something for everyone to relate to.

The British and Canadian episodes clearly have different budgets for production and cast, but the storytelling styles across the series are so broad-ranging that the contrast isn’t too obvious. The acting isn’t perfect, but about the quality that children are used to from Doctor Who or Wolfblood. But I think that makes the children on the screen accessible to young viewers; bevause they are not perfect actors, they are real people and – having observed my son watching the show – it can, therefore, feel as if creepy things are happening for real. 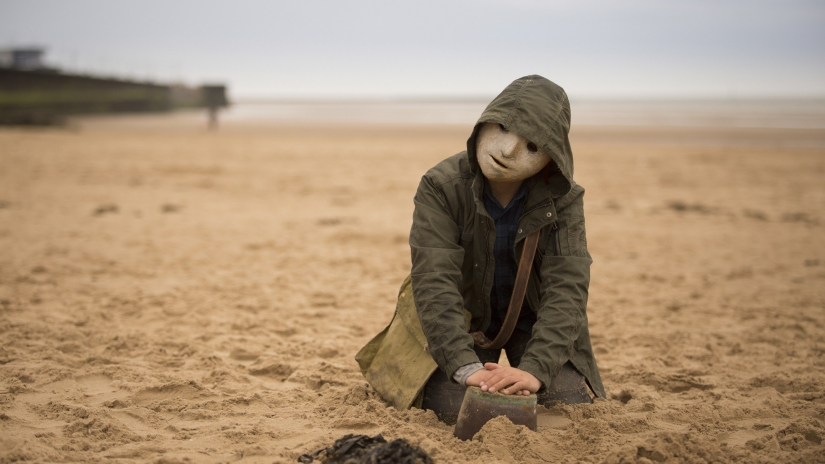 I don’t know if there is to be another series, or if it will be possible to buy series on DVD, or even if it’s possible to find a Curious mask for sale anywhere. So if anyone finds out, could you let me know, please?