Home » TV » Creeped Out Recap: An Ambitious And Unsettling Story In Reverse

Creeped Out Recap: An Ambitious And Unsettling Story In Reverse

As the narrator asks: “If a scary story went backwards, started at the end and finished at the beginning, would that somehow make it less creepy? Or is the real fear in not knowing who is messing with you and why they’re doing it?”

As the narrator asks: “If a scary story went backwards, started at the end and finished at the beginning, would that somehow make it less creepy? Or is the real fear in not knowing who is messing with you and why they’re doing it?”

This recap of Creeped Out Season 2 Episode 9, “Tilly Bone”, contains spoilers. You can check out our thoughts on the previous episode by clicking these words.

“Tilly Bone” has a radically different style of narrative to the other episodes in Creeped Out: it starts with its ending, and then each scene is played in reverse order backward from there, some with a slight overlap. And it’s brilliant.

The central character is Cass (Lola Mae Loughran), who is a fan of the (fictitious) series Outer Realm and presents her own vlog about it; sometimes praising and sometimes criticizing. Cass never pulls her subject to pieces though until the latest installment is released… because it’s a prequel, and she rejects the value in knowing where her favorite characters came from. But as her friend pointed out, “the Internet is listening”, and shortly after, Cass receives a mystery gift from the reclusive creator of her show, and freaky things follow.

The catalyst to these freaky things is the “new girl”, Junebug (Alice Franziska Woodhouse), who claims to be able to “make enemies for your enemies” after Cass is pranked into dressing up as an Outer Realm character at school. But if you follow the story (and I confess it takes some effort), it’s apparent that Junebug was the one who prompted that prank. What’s less apparent is why, though; or indeed who she is… there are clues in the narrator’s closing comment about being careful who you pick on, but could this person really be the mysterious Mos Ducasse? Or — more unlikely — could she have sprung from the doll in Cass’s gift?

I love the ambiguity in Creeped Out Season 2, Episode 9. Not only are there threads left hanging for the viewer to ponder over (as Cass would have wanted from her favorite franchise), but also it is impossible to know for sure whether the “enemies” Junebug’s “Tilly” artifact creates are actually there or just in the imagination of the individuals concerned. They are very unsettling, both conceptually and visually: we see someone sucked up by a carpet, terrorized by a child’s doll, trying to kill a cake; all without explanation at first, and all remarkably well realized. 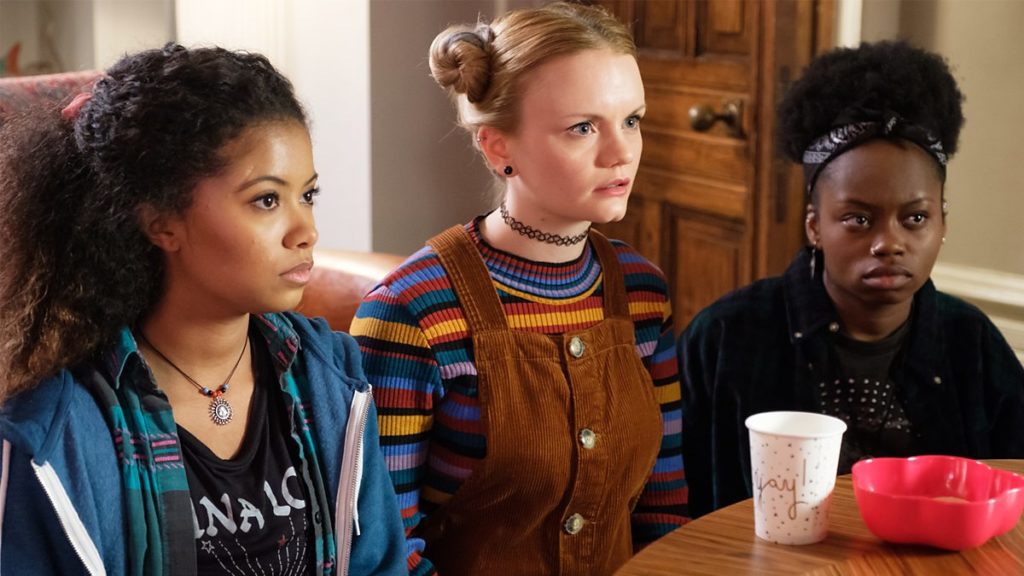 The reverse chronology comes with pros and cons, though. From the start, we are kept on our toes, obliged to observe closely in order to put the pieces together. This clearly reflects Cass’s issue with prequels, in that we simply have to find out some background in order to understand what we’re seeing. But it is possibly a little too demanding for the young audience Creeped Out is written for. Granted, many adults know by now to watch this show with their kids; but even some adults needed to watch Memento more than once. But because of that reverse approach and the fast pace of the editing from one scene to the next, the audience is thrown into surreal shock without any warning, and that — for me at least — kept the tension turned right up to the end.

The opening narration of Creeped Out Season 2, Episode 9 asks: “If a scary story went backwards, started at the end and finished at the beginning, would that somehow make it less creepy?” Well the emotion I felt watching Eternal Sunshine of the Spotless Mind was enhanced with this technique: knowing the resolution makes the story tragic. In “Tilly Bone”, the reverse chronology puts the viewer on edge straight away, and the pace of it makes you spin, not knowing where it could possibly go next; especially as some of the surprises are so surreal. Cass’s “real fear” may have been in not knowing who was messing with her, but to me, there were several things to be afraid of; not least because some questions raised do not get answered.

“Tilly Bone” was a showcase of what the Creeped Out team can do when they’re off the leash. The director, Simon Hynd, is the one behind the last truly atmospheric episode, “No Filter”; and the writer, Bede Blake, is one of the show’s co-creators and has had input into over half the episodes as a writer. I would love to see what this pair could do for an adult audience.