Spinning Out Season 1, Episode 6, “Have a Nice Day!” delves into Jenn more as she reveals her life as second fiddle to Kat, while Kat starts a new romance.

Spinning Out Season 1, Episode 6, “Have a Nice Day!” delves into Jenn more as she reveals her life as second fiddle to Kat, while Kat starts a new romance.


This recap of Netflix Series Spinning Out Season 1, Episode 6, “Have a Nice Day!” contains significant spoilers.

Every action seems to have a consequence in Spinning Out. The lead character Kat (Kaya Scodelario) does not lead a simple life, with her friends and family depending on her despite her own mental fragilities.

Spinning Out Season 1, Episode 6 opens with a flashback; a young Jenn winning a medal. In the present day, she is giving a speech to her family. Her grandma has visited to watch her in the ice skating program. No pressure…

Kat is taking her meds and getting ready for the day. Serena walks in and asks her to stay but Kat says she can’t. Their mother returns from the hospital and there is tension between Kat and Carol immediately. Carol tries to tell Kat that it will be different this time. Kat questions how she is going to pay for all the help she needs — “Your life is a series of fresh starts”.

Kat is blatantly fed up here.

An infatuated Jenn tells Justin that not only has she messed up her hip, but her knee is causing her issues too. In the same conversation, Jenn arranges to see Justin again on another night out. It’s clear she is besotted by him.

Spinning Out Episode 6, “Have a Nice Day!” sees Kat forced to overcome her fears; she is still not ready to overcome her fears despite a harness helping her down the triple jump. Dasha insists that she must do it. Kat keeps failing but Dasha keeps drilling the routine into her. Kat counts to 6 and finally does it with zero pressure from the harness. Kat celebrates by hugging Justin and there’s slight tension. Later, Dasha accuses Justin of liking Kat and says it is important to keep things strictly professional.

Carl is determined to sort her life out; she attends a bank interview for a loan. The bank considers her a risk and they reject her application. Now feeling desperate, Carol speaks to Mandy about selling her house. Mandy is a realtor. Carol admits she is in the deep end and that she needs to sell — due to her help with Kat, Carol trusts Mandy.

Justin and Kat go out to celebrate. Kat states she was so happy to finally land that triple-toe — there’s clearly sexual tension between them. Kat thanks Justin for taking her on but then offers some flirty criticism — “How can someone be good at skating and suck so bad at darts?”. Justin texts Jenn and tells her something has come up but Gabe hints that Justin and Kat have something going on.

Kat insists that she has to go home as the tension between her and Justin grows. As she is about to leave, Justin zips up her coat. Later, Kat knocks on Justin’s hotel room door and they have sex.

The next morning they look at each other in bed. Kat asks where her “robe and room service routine” is — rumors spread of how he treats his one-night stands. Justin tells Kat that she is different. He sees the bite marks on her and she admits that she used to bite herself but since it has been okay between them, she has stopped. Justin thinks they can go all the way to the Olympics. 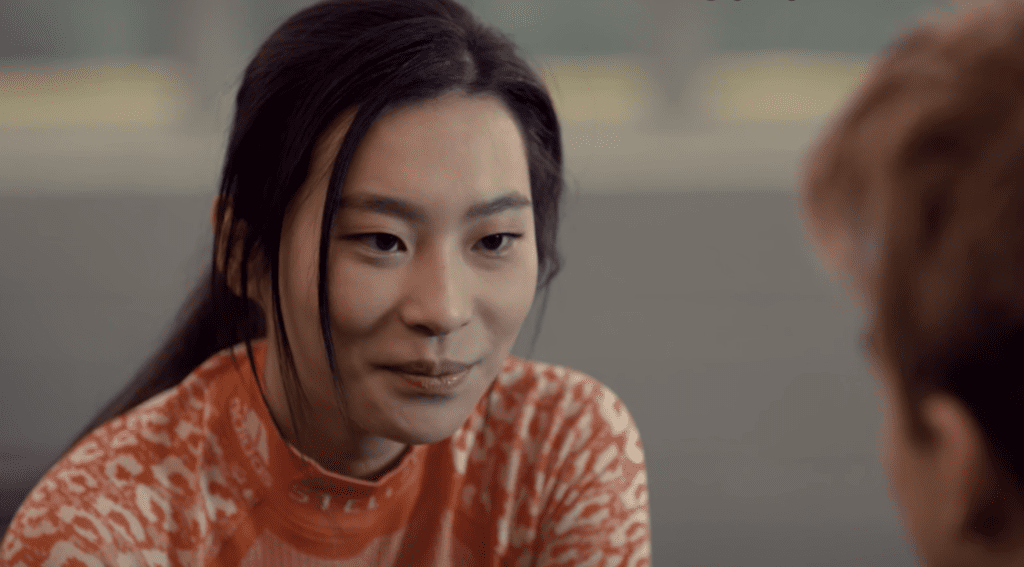 We see another flashback for Jenn when she won a second-place medal. In the present day, Kat speaks to her; Jenn tells her that she has damaged her hip again. Kat suggests changing to a song with fewer jumps.

At the midway point of Episode 6, “Have a Nice Day!” Mandy comes over to check out Carol’s property. She has a panic attack after saying “I would have killed to have grown up in a place like this”. Carol helps Mandy maintain her breathing. Mandy tells Carol that she is pregnant — “It’s not my first”. She has a daughter and James does not know; she was fifteen and was not ready. Carol admits Kat was not an accident and blames her daughter for ruining her skating career when it was already over.

Kat keeps practicing her jumps on the ice and is getting frustrated; once again, her mother watches but this time she wants to talk properly. Kat admits she didn’t think the pressure would be as bad in pairs. Kat expresses her irritation at her inability to do the triple jumps — “If it isn’t the PTSD, it’s the lithium making me groggy and tired”. Her mother explains that’s why she used to go off her meds, to help her find her confidence back. Carol gives Kat her money back.

And of course, after this Kat goes home and reduces her medication.

Before the big show, Kat tells Justin to do the triple-toe. They do their routine in front of the crowd and judges and Kat lands every single jump, impressing everyone. Leah tells Jen that Jet left Justin’s room the other night, which is why she is full of confidence. Jenn looks shocked and experiences a flashback; it shows a young Kat winning the gold medal but no-one is there to celebrate with her — Jenn gives Kat her flowers.

After the show, Dasha is a little dizzy and decides to go home. An excited Kat goes to speak to Jenn who is immediately furious — she lets Kat know that she knows about Kat sleeping with Justin. “All you care about is you. You know what, f–k this, I’m done being second to you”.

Jenn enters the ice and starts her routine — her family is present. She has decided to go back to the short program which has many jumps. Justin wonders why Jenn is putting herself through so much pain but Kat knows why — “To prove she can do it”. Jenn completes the routine successfully but soon after she is finished, she runs to the toilet and throws up due to the pain. Kat enters the bathroom and tells her she was perfect. Kat apologizes and hands Jenn some flowers. Jenn walks off and puts the flowers in the trash.

Spinning Out Season 1, Episode 6, “Have a Nice Day!” ends with Serena’s father Reg coming over to see his daughter — Carol does not look happy. Justin and Kat find Dasha slumped on the floor in her house.