Spinning Out Season 1, Episode 8, “Hell Is Real” opens up with a flashback of a young Marcus seeing his new house with his parents. The police turn up. In the present day, a journalist wants to do a story on Marcus’s (Mitchell Edwards) rise to the skiing team but he does not want to draw attention to himself and feels that they only want to talk to him because he is the “black guy in the white skiing team”.

Episode 8, “Hell Is Real” also opens up with Kat on a run. She’s run 9 miles and panics because she is late for group therapy. Meanwhile, Jenn is seeing a doctor with her father. The doctor provides her with some devastating news — she won’t be able to spin or jump; Jenn will not be able to skate again.

Kat shows up at group therapy breathless, sweaty and apologetic. She notices her mother is there so quickly departs as she doesn’t want to be in the same group as her. She returns back to Justin’s hotel room, runs over to Justin and kisses him; Kat expresses very quickly that she wants to have sex — “I’m so in love with you”. Justin still cannot keep up with her energy and explains he has some errands to run. Kat offers to get Dasha’s groceries. Justin heads out to help his father, who is happy that his son has turned a corner.

Spinning Out Episode 8, “Hell Is Real” sees Carol attempting to enhance her career; she presents to Mandy her plans to sell properties. Mandy states that these types of accounts require a certain amount of finesse — Carol reacts and defends herself before immediately quitting. At that moment, Mandy’s waters break so they both rush to the hospital. Mandy wants Carol to stay. Meanwhile, Serena is annoyed that she cannot get in touch with Kat — they were supposed to meet.

Back to Kat; on the way to Dasha’s house she enters a store to buy a stole for her. Kat also buys a toaster and then starts taking random items out of someone’s box. Kat is frantically attempting to buy everything. While Kat is trying to gain items, Jenn is throwing away all her trophies and memorabilia. She doesn’t believe she needs any of it anymore.

Another flashback shows Marcus’s father getting arrested outside his new home while a young Marcus cries in the car. In the present day, Kat shows up at the restaurant in a new dress and asks Marcus for champagne. Marcus looks uncertain and wonders why Kat is so excited.

Justin returns to the hotel room and sees Kat has bought items she did not need, music is blaring and she’s brought random strangers home — she’s throwing a party. Justin is worried that she hasn’t given Dasha any groceries. It still hasn’t sunken in yet that Kat is having a manic episode. Meanwhile, Serena attends lunch with Drew and his friends. She tells Drew everyone is flaking on her.

At the midway point of Episode 8, “Hell Is Real”, Mandy’s baby heart rate is too low and she has to be rushed off for an emergency c-section. From experience, this is horrifying; the rush, the sense of emergency, the panic from the hospital staff — it is stress-inducing. 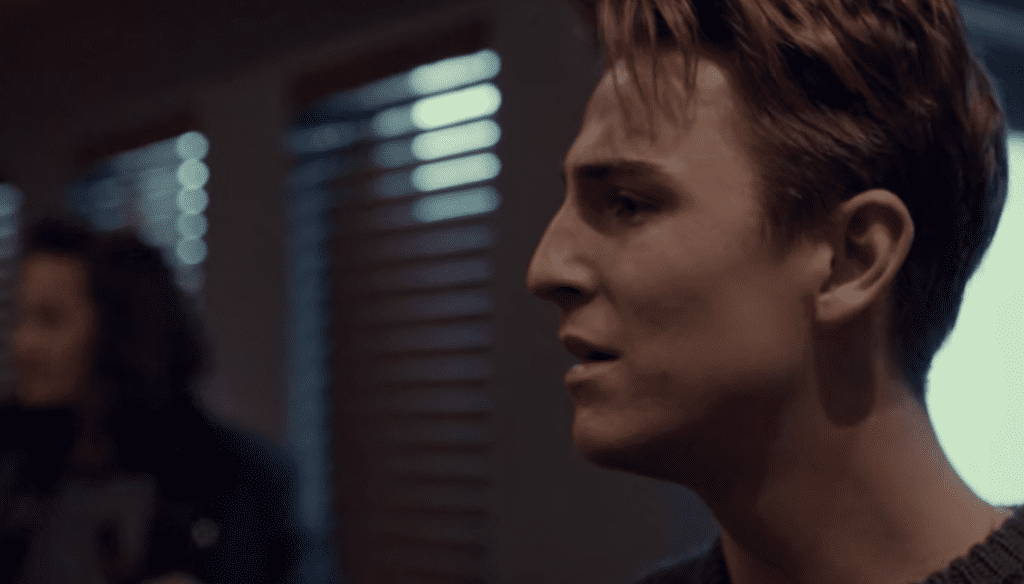 Kat’s party is now in full swing and Justin is getting irritated. More and more people come over. Kat starts crushing her meds to snort. Serena turns up and sees Kat is having a party so walks away. Justin notices a trolley full of champagne is getting wheeled to the hotel room and now realizes that this party is getting out of control. Justin talks to Marcus and Alana and asks for help to shut down the party.

Serena is delivered a further blow in an episode where she feels everyone is abandoning her; her father makes her aware that he’s accepted a new job in Colorado that pays more — he’s not staying anymore. A wounded Serena walks away from her father.

The c-section happens and Carol is supporting Mandy and keeping her calm by singing Bon Jovi. The baby leaves Mandy’s body but isn’t crying. There’s a moment of panic in the room as the doctors pump oxygen into the baby. The baby finally cries and there is relief in the room.

Back to the party and Kat suddenly realizes that Justin is not there. Justin, Marcus and Alana show up and a fight breaks out; Marcus and Justin are swinging and throwing random strangers around to try to stop the party. Kat sees the chaos and she looks horrified; Alana takes Kat into the bathroom and suddenly realizes that mental state Kat is in and tries to calm her down.

Back at the hospital and Carol updates Mandy and James about the baby — there’s a long road ahead but she is confident the baby will make it. Mandy tells Carol that she can have the premium account at her company — “You get stuff done”.

Justin and Marcus are at the police station after the fight at the party. Marcus says he has never seen Kat this wild before. Justin says he has — the first time they met she talked about how the universe brought them together. James bails out Justin but Marcus cannot leave until the morning. Marcus tells the police officer that he’s on the ski team and the officer scoffs. A flashback shows the officer scoffing at his father for saying he owns the house he has just bought.

Spinning Out Season 1, Episode 8, “Hell Is Real” ends with Justin returning to the hotel room which has been completely trashed. Alana asks Justin how long Kat has been off lithium. Justin does not understand the question. Alana believes that Kat is having a manic episode and that she has bipolar. Justin had no idea of Kat’s condition. Justin enters the bathroom where Kat is in the bath, which has calmed her down. Kat keeps repeating “she came last time she won’t come this time”. Her mother tries to ring her and leaves her a voicemail about getting a promotion.