Spinning Out Season 1, Episode 9, “#1 Mum” is clunky in how it handles various plot points but it is a good education into the perception of mental illnesses.

Spinning Out Season 1, Episode 9, “#1 Mum” is clunky in how it handles various plot points but it is a good education into the perception of mental illnesses.

Spinning Out Season 1, Episode 9, “#1 Mum” is more important than most chapters in this series. It delves into the perception of mental illnesses and the impact it can have on the person and the people around them. It understands the need for a support group but also the need for honesty and transparency.

Episode 9, “#1 Mum” opens up with a flashback; Kat (Kaya Scodelario) is in hospital after her skating accident and her mother is next to her at the bedside. In the present day, Carol is looking after Kat and managed to get her back on the lithium. Carol explains that the hospital does not know and that Kat has been asleep for four days. She is going to miss sectionals but she’s told everyone that she has pneumonia. Carol believes she has saved Kat for future opportunities.

Justin’s father James speaks to Justin. He wants to know why he threw a party despite Kat having pneumonia; James thought Justin cared about Kat. His father says he has 24 hours to leave the town.

Dasha has managed to find the love of her life on Facebook — Tatiana. She won’t add her as she looks happy. Jenn messages Tatiana for her and Dasha is shocked — “I haven’t seen this woman in 40 years”.

Mitch and Carol have breakfast together; Mandy is in the hospital so Carol has the opportunity to take her accounts and sell properties. Meanwhile, Serena is sending nudes to Drew. Kat speaks to Serena and tells her she is proud of her skating success. Serena tells Kat she is dating Drew. In a moment of clarity, Serena tells Kat that she threw a raging party in Justin’s room. It suddenly dawns on Kat that there’s more to her manic episode than she believed.

Jenn is frustrated and tells Marcus that she’s turned down a great guy (her doctor). Marcus tells Jenn that he has been kicked off the ski team. The whole Jenn/ Doctor storyline is a very uncomfortable story.

Carol meets a client to try and sign a deal for a new property while Kat goes to Justin’s hotel room. Kat asks Justin if anyone saw her at the party. He reveals that Marcus and Alana know. Justin lets Kat know that he is having a “going away” party and he breaks up with her.

Back to Marcus, and Brent has a go at him for not showing up to the ski team. Brent gets aggressive with Marcus when Marcus claims he slept in. Kat approaches Marcus to speak about the party; she wants him to keep it quiet. Marcus is fuming for all the trouble Kat has caused. Carol sees Kat in the distance and chases after her, while Jenn visits Justin — Jenn senses that Justin really liked Kat and gives him a hug. 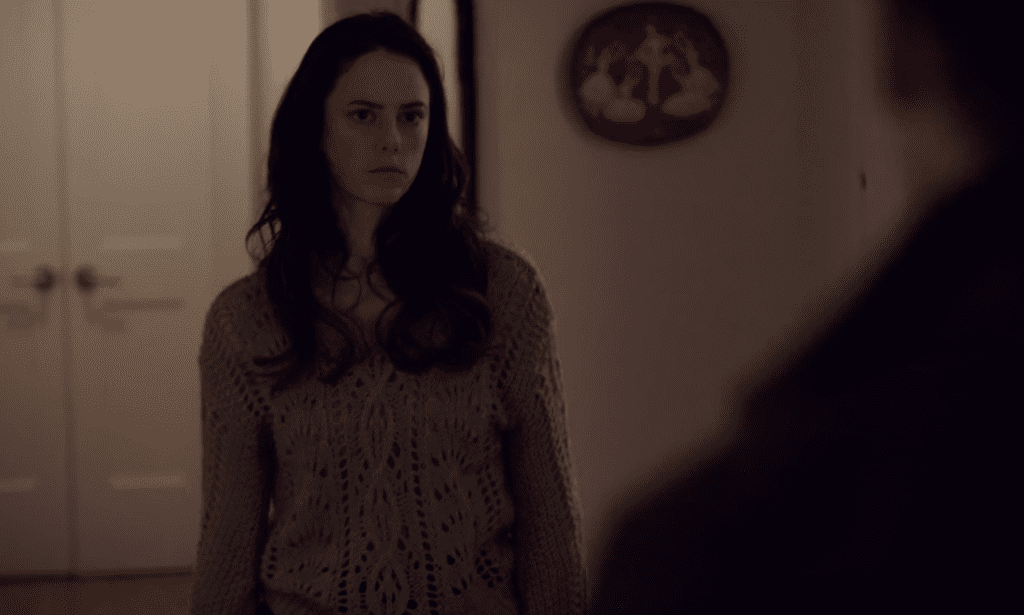 Carol tells Kat that she needs to play the long game, stay quiet and act like she has pneumonia. Mitch tries telling Carol that mental health perception in the sport is changing.

Justin heads to Dasha’s house; Dasha wants help with Tatiana. Justin breaks the bad news that he is leaving town. This forces Dasha to speak to Kat and she asks for the truth; Kat says she has pneumonia. Dasha senses a lie and tells Kat she is no longer her coach. Serena asks Carol about the time Kat cracked open her skull — Serena is worried the same thing will happen to her. Meanwhile, Jenn goes on a date with the ex-doctor. He reveals he has had a crush on her for a very long time.

At the midway point of Spinning Out Episode 9, “#1 Mum”, Kat is suddenly packing for the sectionals; Carol tells her that she’s being irrational but Kat believes if she does not skate it is over. Carol is in disbelief that Kat wants to still skate when she needs to recover — “The last time you were at that rink you nearly f—ing died!”. Kat heads out anyway, but Carol threatens to lock her in and says she will not be going to sectionals with Serena. Serena gets upset, claiming she suffers the most due to their mental illnesses. Serena reveals a truth bomb; that it was Carol’s fault that Kat had the skating accident — she asks Kat to change the lutz at the last minute. A flashback reveals Carol wanted to keep it a secret, and that it was indeed her fault. Kat expresses everything went wrong after that fall — “You’re a bad mother”. Kat leaves the house and watches her fall on repeat.

This encourages Kat to take a different tact and one that is admirable and constructive to the story; Kat emails Dasha, Marcus, Justin and Jenn about her bipolar disorder. She completely opens up about her past and present and asks for forgiveness. Kat also tells Justin’s father directly about the party and her condition. After she sent the emails, she manages to catch Marcus — he’s back on the ski team after he told the coach the truth; he leaves for Argentina in the morning. Kat expresses that she is happy for him. Jenn plucks up the courage and speaks to Kat about her bipolar directly as well.

Like in Modern Love, the narrative is encouraging those who suffer to talk to their close ones about their mental illness, rather than trying to veil it.

In a bizarre twist near the end of Episode 9, it is revealed that Serena is meeting the same man that Jenn has recently dated. The doctor tells Serena that he will come to watch her skate.

Spinning Out Season 1, Episode 9, “#1 Mum” closes with Justin heading to Dasha’s house — Kat is there. Kat apologizes and asks if they can still skate together. He rejects the idea that it can be the same. Justin asks Kat when she stopped taking her meds; he asks if she meant it when she said she loved him or was it mania. He reveals he meant it when he said he loved her. Kat says she doesn’t know.