Home » Film » Like a Boss review – who’s to blame for this confused female-friendship comedy?

Like a Boss review – who’s to blame for this confused female-friendship comedy?

Like a Boss claims to know what women want, but unless it’s a confused, pandering, derivate comedy about friendship, it doesn’t have the answer.

Like a Boss claims to know what women want, but unless it’s a confused, pandering, derivate comedy about friendship, it doesn’t have the answer.

Let’s not waste anyone’s time here — Like a Boss isn’t a good movie. It’s pandering and derivative, it wastes a good cast on thin archetypes, and none of its jokes are as funny as it thinks. None of this is particularly surprising when it comes to big studio comedies, which tend to be awful, but this one has a ready-made scapegoat; it’s a film about female friendship directed by Miguel Arteta, a man, and written by Sam Pitman and Adam Cole-Kelly, two more men. That, so I keep reading, is enough of an explanation for all of the film’s ills. But is it really?

It certainly doesn’t help. Whatever point the film is trying to make seems to be clumsily misunderstood on a basic conceptual level, which is symptomatic of no women in a writer’s room tasked with making a point about women. But it’s also implying that none of the women who worked on Like a Boss — including Tiffany Haddish, a seriously hot property who also has an executive producer credit — had any say in it whatsoever, and were perfectly happy to just do precisely what they were told, even if it was to their detriment. I have an extraordinarily hard time believing that to be the case. The root of the film’s ineptitude is much more likely to be the success of other films a bit like it, particularly Girls Trip, which Haddish also starred in; making a mainstream studio comedy is hard work, and it’s easier to try and replicate the specific alchemy of past successes than it is to reinvent the wheel.

Unsurprisingly, then, all the ways in which Like a Boss fails is all the ways in which it tries to emulate other, better comedies — and almost none of them are specific to its male-written, female-centric themes. A scene in which Mia (Haddish) accidentally eats ghost peppers feels like a safer-for-work retread of the similar scene in Girls Trip with the grapefruit; it’s all big physical comedy and perplexed reaction shots, but since it’s so reminiscent of a better version — by the same performer, no less — it just feels like Haddish doing a bit. A lot of the film is like that. It peddles old ideas — about comedy, about race, about capitalism, and yes, about gender — as though they’re new and exciting, without any understanding of how to navigate these topics beyond using them as setups for jokes about Rose Byrne’s lame white-chick dancing. 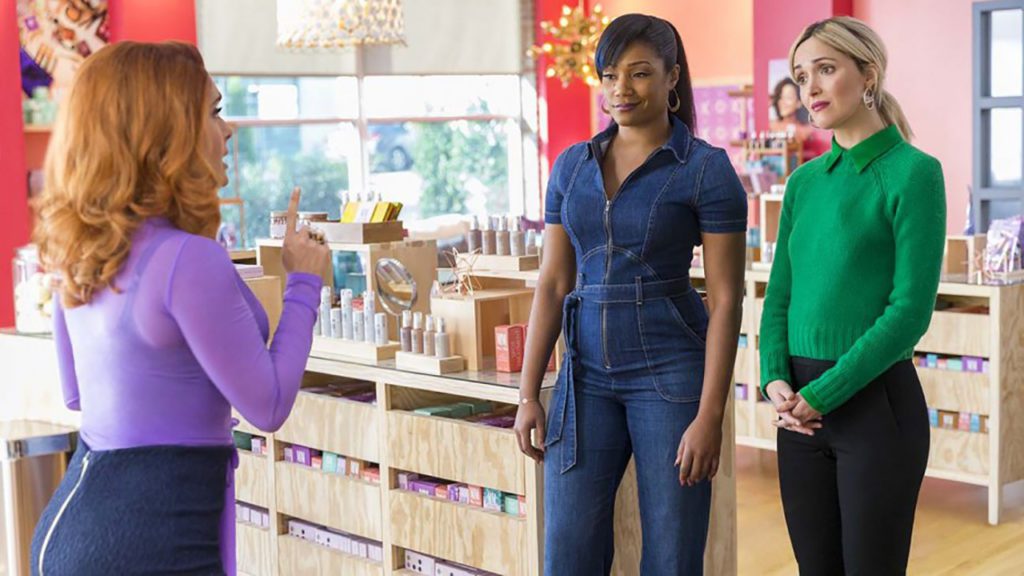 Byrne plays Mel, Mia’s best friend and business partner; together they own and run a floundering cosmetics company. They have the opportunity to get out from under when industry mogul Claire Luna (Salma Hayek in her exaggerated caricature final form) offers to buy their company, though Like a Boss never makes clear why she’s so interested, why she’s so determined to fracture their relationship and finagle a controlling share, or indeed how Mel and Mia’s company became even moderately successful in the first place. There are vague suggestions that Mia is the creative half of the partnership while Mel handles all the admin busybody work, but they’re both characterized as pothead morons even at their best; Claire sets them perfectly reasonable tasks like delivering a presentation and they absolutely fall to pieces under the pressure.

This is nothing at all to do with a fundamental misunderstanding of women, but a fundamental misunderstanding of basic logical storytelling, and certainly of humour. Salma Hayek struts around in top-to-bottom orange wielding a golf club as though that, in itself, is funny — and it is for maybe five seconds until you realize that there’s nothing else to the character at all beyond an utterly unexplained vendetta that greases the plot’s wheels. None of this makes much sense, nor does it really attempt to; it’s all just an excuse for gross-out slapstick, foul-mouthed ranting and sexually-explicit oversharing, since that all worked for Girls Trip.

Needless to say, it doesn’t work for Like a Boss. At only 83 minutes with a litany of stars on which it could be marketed, you have to imagine that the production was designed by committee and that the committee in question already used their best ideas. The result is an imitative and often illogical time-waster than is too deliberately apolitical and unchallenging to be offensive. It’s just a bad movie in almost every way that counts, and in all the ways that you’d think.