“Monster Inside” reveals more information than ever about Michelle’s sister, as a freak accident endangers one of the 126.

“Monster Inside” reveals more information than ever about Michelle’s sister, as a freak accident endangers one of the 126.


This recap of 9-1-1: Lone Star Season 1, Episode 8, “Monster Inside”, contains spoilers. You can check out our thoughts on the previous episode by clicking these words.

Continuing the show’s seemingly endless ability to stage unusual and involving Texan disaster sequences, 9-1-1: Lone Star Episode 8 opens with a couple out at dinner, the mother fretting over having left her son at home with a babysitter. She allows herself a quick peek at the video monitor, just to set her mind at ease, and there he is — happy, chatty, and about to be eaten by a snake.

The 126 arrives to find the monster inside — aha! — and several more monsters surrounding the ill-looking babysitter, who is flat-out in the basement. A crack in the foundations and the lure of moisture enticed a rattlesnake rhumba, and it takes the enthusiastic deployment of CO2 to shift them for long enough to drag the poor sitter to safety. Surely she isn’t getting paid enough for this.

After this fun opener, we move onto the major concern of 9-1-1: Lone Star Episode 8: Michelle (Liv Tyler) and her missing, presumed-dead sister Iris (Lyndsy Fonseca). A flashback in “Monster Inside” shows them at their best, out drinking, the younger Blake trying to convince the older one to get up and sing karaoke. There are hints that Iris is in a possessive relationship, but nothing too sinister. In the present-day, Michelle is being reassured by Carlos (Rafael Silva), but once Detective Washington (Tamala Jones) reveals that there were copious amounts of blood in the truck wreckage and might have been as many as four people in there, being reassured is the least of her concerns. She also recognizes Iris’s bracelet among the personal effects taken from the truck. Apparently, she never took it off.

There’s good news and bad news for Strand (Rob Lowe) in “Monster Inside”. His cancer doctor (Ginifer King, credited “cancer doctor” even though the characters’s name, Barbara Jacobs, is stitched into her clothing) chastises him for letting his healthy lifestyle slip, but as it happens his tumor is shrinking. He’s told about how his experimental trial is only available because of testing done on dogs, many of whom come in for treatment just like he does and go home at night to loving families. Some, though, are abandoned, and while treated humanely are nonetheless housed in the equivalent of kennels. Strand isn’t about to have that, so naturally takes one into the firehouse the next day. Buttercup, meet the 126. The team loves the animal, with the obvious exception of T.K. (Ronen Rubinstein), who throws a hissy fit about it.

Emergency time! Trevor (J.P. Manoux) calls 911 to alert them that something is wrong with his dear old mother — he’s right in that she has been dead for what looks like several days, though he evidently hasn’t accepted that fact. Michelle tries to break the news gently but he takes it rather badly, holding the paramedics hostage with a sword and demanding they do something to save her. Michelle plays a blinder and tricks Trevor into turning around so she can shock him with the defibrillator. I really do love this show sometimes. 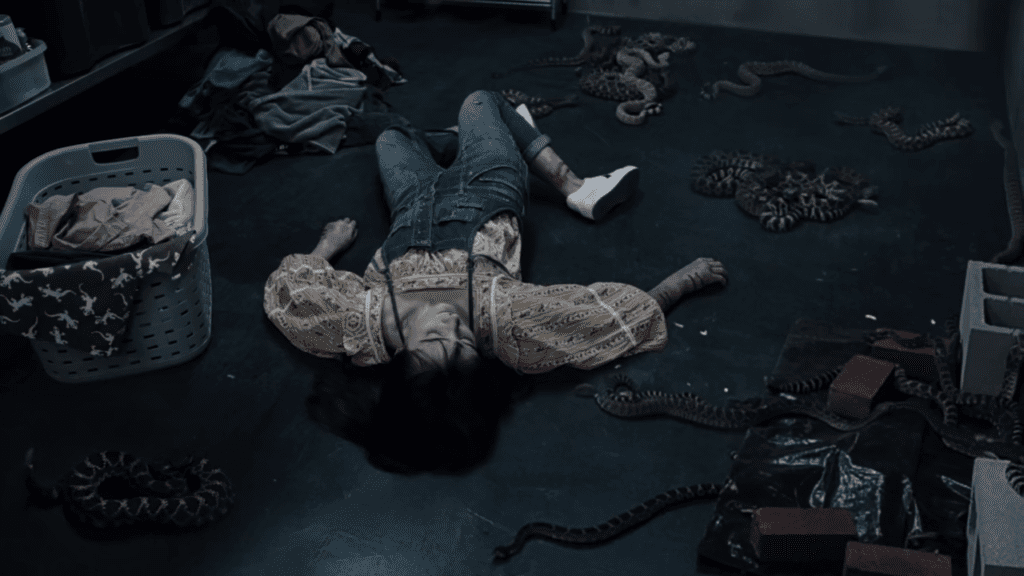 Anyway, more clues emerge regarding Iris, as Washington plays Michelle a voice recording pulled from the burner phone in the wreckage. It’s one of very many frantic, paranoid ramblings; Washington suggests a late-onset mental illness, and also, given the blood found in the car was hers, a tragic accident. Michelle is less convinced, even if another flashback reveals a ring of truth in what Washington’s saying. We see Michelle and Iris arguing at the birthday party of their late father, and in the scene, Iris is clearly unraveling. This only makes Michelle feel more guilty for not answering her call on the night she went missing — she saw the signs and ignored her all the same.

T.K. continues to struggle with Buttercup in 9-1-1: Lone Star Episode 8, and in a scene with his father he confesses why: He’s scared of falling in love with something else that he’s just going to lose. It plays a bit overdramatic, but it isn’t much of a leap to imagine why he’d feel that way; he already lost a lover and stands to lose a father, both through no real fault of his own. But Strand is able to give him some perspective and he embraces the doggo.

The final emergency call of “Monster Inside” subverts the formula a little. It begins with an obviously confused man, Bruce, calling Grace (Sierra Aylina McClain) to report a potential break-in at his home. He hangs up before she’s able to get his address, but she’s able to trace him and despatch officers to his home — where his wife reveals that she reported him missing. He isn’t there. Instead, his early-onset dementia has led him to their first home, where they haven’t lived for fifteen years, and the current owners, a husband, wife, and child, are hiding out in the bedroom with a gun. Grace is able to contact them and then Bruce, talking him down and leading him outside. It’s a happy ending right until it isn’t. The husband in the bedroom has a heart attack, and when the 126 breaks down the door to help him, the kid shoots T.K. in the chest.

Michelle sings out 9-1-1: Lone Star Season 1, Episode 8 over a moving montage. T.K. is alive, his lung having been reinflated, but any potential brain damage won’t be detected until he wakes up. We see Michelle’s friend at the homeless camp collapse and be taken away in an ambulance. It’s a dour ending following a sneaky trick with the established formula, proving that the show, however comfortable it might appear to be getting, still has some surprises up its sleeve.

ADDENDUM: As several commenters have pointed out, the end of the episode confirms that Iris is alive. My bad for not including this in the first place and thanks to the readers for drawing attention to it.