Home » Streaming Service » Netflix » The Letter for the King season 1, episode 3 recap – “At the End of the World”

The Letter for the King season 1, episode 3 recap – “At the End of the World”

The Letter for the King season 1, episode 3, “At the End of the World” is a pointless, filler episode that is just provided for added drama and nothing else.

The Letter for the King season 1, episode 3, “At the End of the World” is a pointless, filler episode that is just provided for added drama and nothing else.

This recap of Netflix Series The Letter for the King season 1, episode 3, “At the End of the World” contains significant spoilers.

The Letter for the King season 1, episode 3, “At the End of the World” begins with Queen Alianor wondering if there has been any word from Ristridin — he was killed in the last episode. King Favian is insisting on a summit so she has no choice but to leave. Before leaving, the Queen visits Tiuri’s mother in prison. Tiuri’s mother warns the Queen there are forces at work that she cannot overcome.

And in The Great Mountains, Tiuri and Lavinia are riding through the snowy mountain, pretending they are embarking a journey in The Fellowship of the Ring. Lavinia tries to open the letter case herself. The Red Riders are also going through The Great Mountain with the Novices. The Novices think the Red Riders are going to kill them; they were used to test if the snow is stable — an avalanche heads their way. Jaro realizes his famous dagger has been stolen so fights Iona, one of the Novices, to get it back.

Lavinia and Tiuri keep venturing through the mountains, confirming this is essentially a filler episode. They are approached by three men and they tell them to have no fear — Tiuri and Lavinia end up in a creepy monastery and they decide to stay the night. Lavinia understandably does not trust the place. Late at night, one of the men tries to teach Tiuri how to use a sword. The man tells Tiuri that he has the power of Eviellan.

The monastery gets weirder as Brother William tells Lavinia that “it’s coming” and then the men capture her — apparently she broke the rules by entering the cloister. Lavinia begins antagonizing the men and then demands that she and Tiuri leave. Tiuri is annoyed at her for some reason despite it being a rather strange place. Lavinia tells Tiuri there is something wrong with this place and as soon as the storm ends, they must leave. 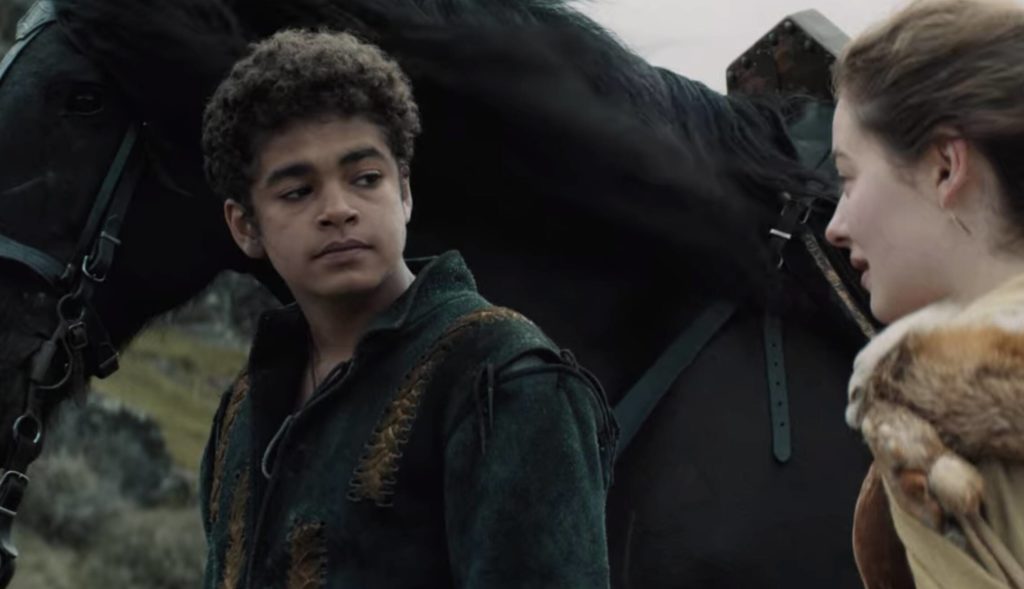 Tiuri has that kind of lacking common sense whereby he’d still go out to the bars and clubs during a Covid-19 pandemic.

The Letter for the King season 1, episode 3, “At the End of the World” closes with Tiuri and Lavinia sharing a bed together and they discuss their lives. Lavinia talks of how her mother left when she was young — Tiuri speaks out of turn regarding Lavinia’s mother so she hops into another bed.

Can Tiuri do anything right?

In the middle of the night, Tiuri sees a man in the doorway and freaks out. He wakes Lavinia and a freaky looking man enters. The man asks Lavinia to put the knife down before saying “it’s coming” and gives Tiuri his talisman. Other men come in and arrest the freaky-looking man but Tiuri urges them to stop and then his voice escalates, showing his magical powers and then all the men in the room fall over. Lavinia looks at him and says “what are you?”.

Apart from revealing Tiuri’s powers, what was the purpose of this chapter?