A proper mystery, party island excess, and a stellar creative pedigree all combine to make White Lines (Netflix) your binge of the weekend.

A proper mystery, party island excess, and a stellar creative pedigree all combine to make White Lines (Netflix) your binge of the weekend.

This review of White Lines (Netflix) is spoiler-free.

For in-depth recaps, check out the episode guide.

You can’t get away from Money Heist on Netflix, and the streaming giant has made no secret of the fact that White Lines, all ten episodes of which dropped globally this morning, is the latest effort of that show’s creator, Álex Pina. Is this new crime thriller, about a woman trying to solve the murder of her famous DJ brother, which occurred 20 years prior on the party island of Ibiza, going to be the next big streaming obsession of the masses? Probably, yeah.

But it’s a very different show from Money Heist, in which a proper murder-mystery rubs up against Ibiza Weekender and various Spanish cast members have to pull confused faces at Mancunian English. Laura Haddock plays the sister, Zoey, and Daniel Mays (in only a slightly less silly role than the one he recently enjoyed in Code 404) her brother’s old friend and current DJ and drug dealer, Marcus. It all has something to do with the Calafat family, its aging patriarch Andreu (Pedro Casablanc), his head of security, Boxer, his ambitious wife Conchita (Belén López), and their children – daughter Kika (Marta Milans) and son Oriol. A casino deal is currently underway that requires the island to be squeaky-clean of drugs and such, so Zoey’s sudden arrival, summoned by a mummified corpse found in the desert that she believes to her brother, threatens to upset a very delicate balance that unscrupulous folks will kill to maintain – and perhaps already have. 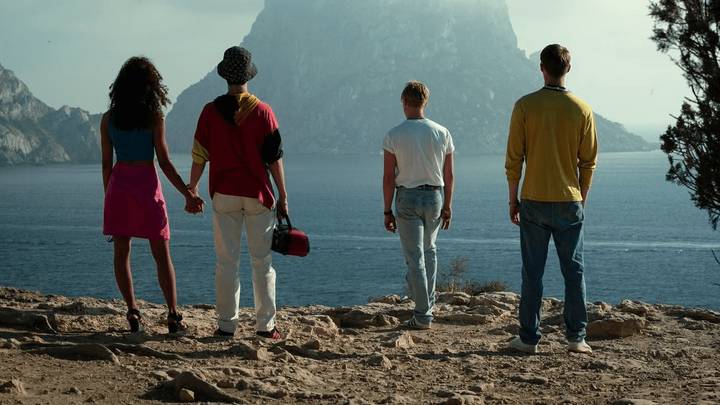 This is all surprisingly complicated, juggling two distinct timelines, plenty of flashbacks, some straight-to-camera narration (it later turns out to be a video call), and some rather explicit orgiastic sex parties stewarded by Angela Griffin, of all people. The plate-spinning business of White Lines makes it a difficult binge-watching prospect, but I doubt that’ll put too many people off. Given our current circumstances, this is as close as we’re likely to get to a big weekend of house music and cocaine. If you’re into such things, obviously.

Even if you’re not, you might well be into the kind of glossy crime drama that White Lines is providing here. It’ll be interesting to see quite how much attention this picks up over the weekend, but I’m assuming it’ll be a lot. Luckily the show’s good enough to feel like it earns it on the strength of a proper character-driven mystery and not just sun, sex, and sand, though it includes plenty of those things too. Can’t argue with that.