Entertaining Australian horror-comedy about the difficulty of fitting in when you don’t belong anywhere. Written by Jordan Waller and directed by Jesse O’Brien.

Entertaining Australian horror-comedy about the difficulty of fitting in when you don’t belong anywhere. Written by Jordan Waller and directed by Jesse O’Brien.


Two Heads Creek is about Annabelle (Kathryn Wilder) and Norman (Jordan Waller, who also wrote the film), recently orphaned twins, who travel to Australia to search for their roots having discovered that they didn’t originate from Poland after all. With only each other and some mystery about their ancestry, there is nothing to keep them in a miserable post-Brexit town where “foreigners” aren’t wanted. As they travel deeper into Australia, they find bigotry there too, along with dark and bloody secrets.

Promoted as a horror-comedy, Two Heads Creek is distinctly more of a satire than a comedy in my opinion. The story points fingers at both British and Australian anti-immigrant sentiments and sensibilities, but not in a preachy or heavy-handed way. There is just enough of it to provide the basis for some delicious Outback caricatures (largely played by well-known faces from Australian TV) and to springboard the plot into a decisively bloody second half. And I don’t know how deliberate this was, but the most interesting piece of character-writing was in the only part that couldn’t be described as immigrant, the indigenous bus driver Apari (Gregory J. Fryer).

Directed by Jesse O’Brien (Arrowhead), Two Heads Creek starts off with gentle small-town-sad humor, the pace of which reminded me of Extra Ordinary (though without such instant giggles); and then focuses for a while on the humorous bond between the brother and sister. They have clearly struggled to understand each other, but can’t help their natural closeness; and although Wilder’s and Waller’s parts aren’t terribly demanding as actors, they are both very believable as the twins. They meander and muddle through the strange little town of Two Heads Creek, not knowing whether to make friends with the larger-than-life locals or scarper, so when the big reveal takes place, Annabelle and Norman will surely look out for each other, even though they have formed different feelings for the town and their apparent heritage by then. 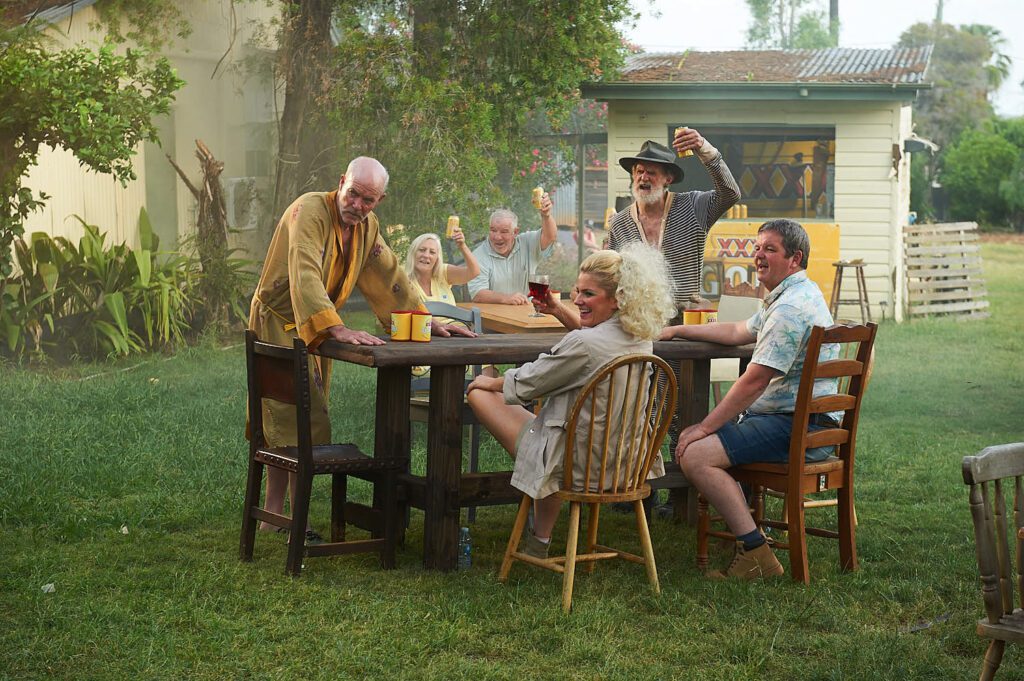 Ah yes, the big reveal. It happens suddenly, but with plenty of signposting (so I’m not giving anything away), right from the opening; some quite explicit, like the “nice Chianti” label on the wine, and some more subtle. So it’s the change in tone, rather than plot direction, which pulls me upright, just like the first time I saw Society. And from then on, Two Heads Creek is so action-filled as to almost seem like a different film, entertaining more than amusing.

So Two Heads Creek is kind of Wake in Fright meets Motel Hell with moral undertones of Goldstone. It’s easy to wonder when you see many films or tropes whether the writer is making his own homage to a genre, or just a little lazy. But in this case, although we have fish-out-of-water comedy and hillbilly horror in one, neither of those subgenres are usually as politically aware as this one. It seems to me Waller is doing his own thing with existing ideas. So I’m kind of glad those cinematic signposts to the reveal were there: they weren’t just in-jokes to point out what was on the horizon, or how big the writer was; but rather to acknowledge admiration for horror influences, Australian and otherwise.

The only real disappointment about Two Heads Creek was that despite being set in the middle of nowhere, Australia, there’s very little use made of the natural environment. Australia is full of it! Watch Wolf Creek or Rogue for the wonders of scenery: Two Heads Creek is an anti-bigot satire in the guise of a blood-and-action horror-comedy.