It’s Okay to Not Be Okay episode 3, “Sleeping Witch”, sees both characters testing each other’s boundaries and it’s all about who will let their guard down first.

It’s Okay to Not Be Okay episode 3, “Sleeping Witch”, sees both characters testing each other’s boundaries and it’s all about who will let their guard down first.

How does It’s Okay to Not Be Okay episode 3, “Sleeping Witch” open?

Episode 3 begins with Ko Mun-yeong arriving at OK Psychiatric Hospital. There’s a storm brewing and she approaches Moon Gang-tae. She tells him she misses him. Nam Ju-ri watches from a distance and looks impacted by seeing them together. She’s fascinated by him, stating that he’s grown up to be a good guy. Gang-tae asks what does she want. Ko Mun-yeong tells him she wants him with a, “whatever I want, I get it” speech. It’s plainly evident that Gang-tae is not going to be able to get rid of her and deep down, I don’t think he wants her to leave.

Teach literature at the hospital

And it’s looking less likely that even if he did want rid of Ko Mun-yeong he’d be able to anyway. The director asks Ko Mun-yeong if she’d like to teach literature at the hospital a couple of hours a week — she doesn’t agree to it but as we learn later in the chapter, she does it anyway.

In the changing rooms, Ko Mun-yeong sees Gang-tae half-naked and touches his body. Annoyed, Gang-tae kicks her out and Nam Ju-ri sees and looks bothered by it again. Ko Mun-yeong tells Ju-ri her past with Gang-tae; she reveals she was the little girl that Gang-tae liked but was hurt when he was younger by her. She says they always meet by coincidence. When Gang-tae wants to head home, Ko Mun-yeong offers him a drive. Gang-tae tells her that her bulldozing won’t work with him. She suggests that he is playing hard to get. It’s Okay to Not Be Okay episode 3, “Sleeping Witch” shows Ko Mun-yeong playing the games and Gang-tae isn’t impressed.

After being at the hospital, Ko Mun-yeong visits what Lee Sang-in suggests is a haunted castle. Her father built it to celebrate Ko Mun-yeong’s birth and so his wife could focus on her writing. Lee Sang-in states the mansion is not sellable due to the bad history. Ko Mun-yeong enters one of the bedrooms and lays on the bed. Ko Mun-yeong then narrates a story about a castle and a princess who lived and slept there for many years. The story is almost identical to Snow White. Ko Mun-yeong wakes up and sees a ghoul over her and she’s frightened. The evil spirit says she will kill the prince. In her nightmare, she becomes a young girl and there is someone drowning. When Ko Mun-yeong wakes up, she imagines Gang-tae comforting her.

The next day at the hospital, the son of Assemblyman Min-seok visits the hospital, so the staff prepares for his arrival. This becomes important later.

Lee Sang-in rings Ko Mun-yeong and expresses how she’s getting destroyed in the media and offers some PR suggestions. Ko Mun-yeong tells Lee Sang-in to tell the media that she’s looking after her father who has dementia and that she may retire to throw them off. You can tell that Ko Mun-yeong is not concerned about her career in It’s Okay to Not Be Okay episode 3, “Sleeping Witch”, and that she only has one goal.

The caregivers learn that Min-seok has a manic disorder and visits once a month. A series of scenes shows how extreme his disorder is as he explains to Gang-tae his story. Ko Mun-yeong gives her literature lessons at the hospital and changes the morals of fairy tales. She tells them skewed lessons like, “karma will bite you if you go for an engaged man”. She expands and tells them all to accept their reality and be happy. 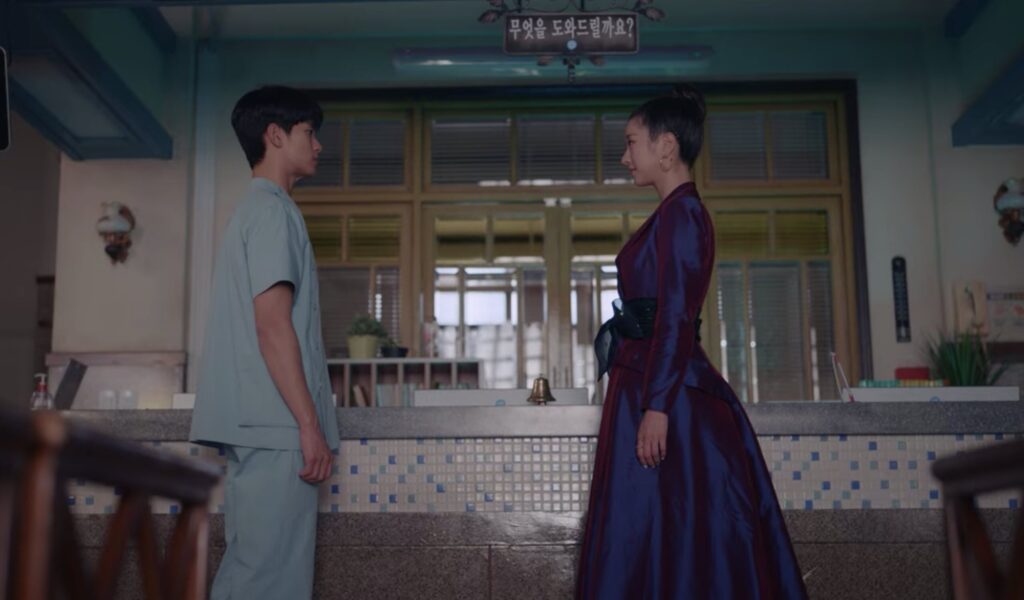 Do you want to sleep with me?

Ko Mun-yeong asks Gang-tae if her class was good. He asks if she believes in what she said — to accept our reality. The conversation turns strange again as Kun Mun-yeong tells him she can see the desire in his eyes. She then reveals she dreamt about him in a loving way and admits to being horny and shouts — “Do you want to sleep with me?” And everyone hears. Gang-tae grabs her and puts her in a room in the back and tells her to quit the games. Ko Mun-yeong tells him to have fun and calls him a hypocrite when he suggests she keeps acting up. That startles Gang-tae. It’s Okay to Not Be Okay episode 3, “Sleeping Witch” shows how Ko Mun-yeong has Gang-tae all figured out despite the extreme behavior.

You need to go for a walk with your father

On her way out of the hospital, Ko Mun-yeong sees her father who is evidently shocked to see her. She walks right past him with her eyes welled up. Sang-tae then sees Ko Mun-yeong and follows her outside the hospital. Gang-tae stops his brother and makes out it is absurd that the author is at the hospital and that he is imagining things.

As she gets to her car, Ko Mun-yeong is asked to take her father for a walk but she declines.

The director of the hospital tells Gang-tae that his brother is very good at drawing. Gang-tae asks if he has mentioned butterflies but he doesn’t recall. The director asks Sang-tae to draw on one of the walls, specifically the view from his office window — he calls it “Sang-tae’s prescription”. Sang-tae asks to he paid for it.

When Gang-tae returns home he asks his brother how much savings he has. His brother plans to buy a mobile home so when they have to run away from the butterflies, they don’t have to move house. Gang-tae gets emotional and hugs his brother, stating he doesn’t need a car. This scene is impactful as it shows the true extent of what the brothers have been through together.

At the hospital, Min-seok escapes his room and Gang-tae is informed. Min-seok is almost run over by Ko Mun-yeong in the car park. Min-seok shows her his p***s and she calls it tiny. Ko Mun-yeong knows Gang-tae is on his way to work so kidnaps Min-seok. Gang-tae stands in the middle of the road and tells Ko Mun-yeong to stop. She speeds up but then suddenly brakes just in time. Gang-tae has flashbacks of when they were kids again and she was cruel to him. It’s Okay to Not Be Okay episode 3, “Sleeping Witch” shows that Ko Mun-yeog is testing Gang-tae in the most extreme ways.

Ko Mun-yeong tells Gang-tae that he’s not running away or avoiding her and that she’s impressed. Gang-tae gets very angry with her and she drives off again. Gang-tae uses Nam Ju-ri’s car to chase after her. Eventually, the police end up chasing them but they manage to evade them.

They end up at an event and Min-seok’s father is the organizer, asking people to vote for him. Min-seok ends up on the microphone and says he’s the ugly duckling of the family. His father collapses on the floor due to the shock. Min-seok says it’s not his fault he was born a little dumb and that his father looked down on him and locked him up if he got in trouble — “He treated me like I was invisible”. The event organizers try to capture him but he keeps on using the microphone. Ko Mun-yeong and Gang-tae look on — Min-seok looks happy.

How does It’s Okay to Not Be Okay episode 3, “Sleeping Witch” end?

Ko Mun-yeong tells Gang-tae that Min-seok is having fun. Gang-tae asks if he should have fun with her and they look at each other intently. At the hospital, Min-seok thinks he is at a nightclub and offers everyone drinks. The staff let him have fun. Min-seok realizes how he’s ended back in OK Psychiatric Hospital, which is slightly upsetting. It’s Okay to Not Be Okay episode 3, “Sleeping Witch” sees both characters testing each other’s boundaries and it’s all about who will let their guard down first.