The Umbrella Academy season 2, episode 1 recap – “Right Back Where We Started”


This recap of Netflix series The Umbrella Academy season 2, episode 1, “Right Back Where We Started” contains significant spoilers.

How does The Umbrella Academy season 2, episode 1, ‘Right Back Where We Started” open?

The end of the world

And it doesn’t take a long time for the world to end in season 2 giving the sense that these characters are spiraling into a loop. Five asks, “What the hell did we do now?”. The other members of The Umbrella Academy are fighting in the war — Hazel appears out of nowhere and warns that nuclear warheads are heading their way so Five time-travels with him before they are killed by the nuclear explosion.

Hazel explains that was the end of the world, November 25, 1963 — it’s now 10 days before the apocalypse and that he’s on his own now after making a promise to Agnes (she died of cancer); they had 20 good years together. Suddenly, three men with blonde hair and guns appear; Hazel gives Five his briefcase as he’s killed and Five teleports to the other side of the street and enters one of the buildings. Episode 1 is a fast-paced start to Season 2 — you have to drink it in to make sense of what’s happening.

The family is alive

Five comes across a scared man who is a conspiracy theorist and entertains the man by asking about him Area 51. The man says he has been waiting for him and the others. For the last 3 years, he’s seen energy surges in which one of The Umbrella Academy members appears — Five knows his family is alive and he needs to find them.

Diego is in a psychiatric hospital. Evidently, the doctor does not believe his story and is trying to help him. He tells the doctor that the President is going to be killed days from now but it makes him look crazier. Diego is referencing the assassination of Kennedy. Five visits Diego in the hospital. Diego ended up in the hospital because he keeps trying to stop the assassination of President Kennedy. Five states they need to stop the apocalypse in 10 days, not 60 years. Diego still wants to save Kennedy and then go further into the past and kill Hitler.

An irritated Five tells the hospital nurses that his brother is having a breakdown so they sedate Diego. This scene is quite funny because a human question when in regards to time travel is always about whether you’d go back in time to kill Hitler. Diego is one of us. 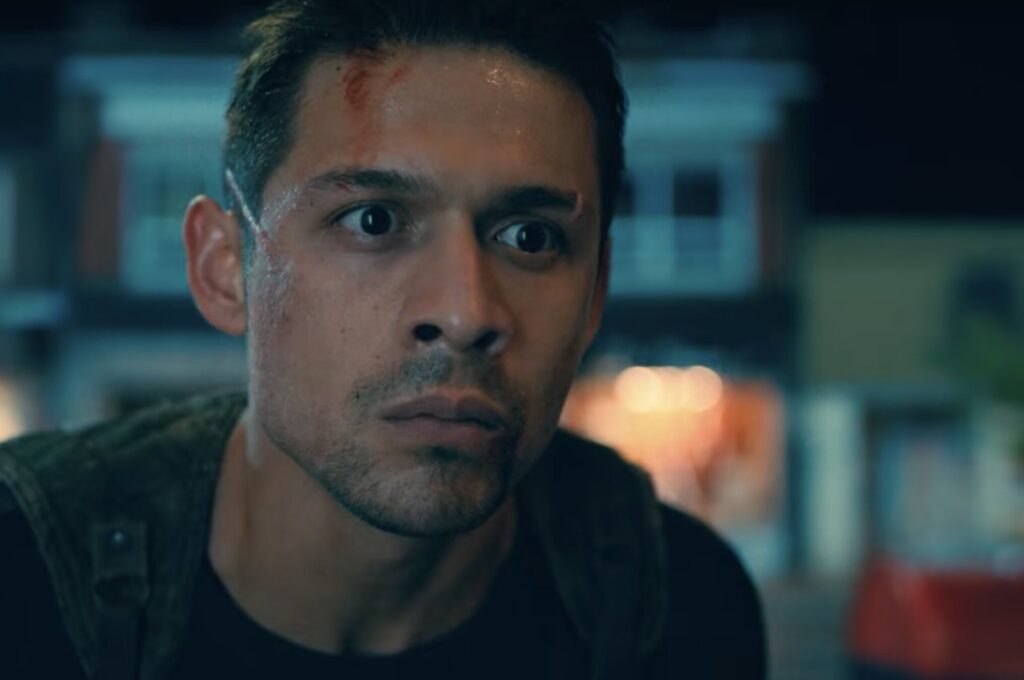 The Umbrella Academy season 2, episode 1 takes a while to get to an important character that led characters here… as for Vanya, well she is with a new family and claims she doesn’t have her memory and has no idea where she is from. This family has obviously brought her in to look after her.

Ben and Klaus are driving back to Dallas but their car breaks down — Ben wants to go back to San Francisco as he has unfinished business — he doesn’t declare what this business is, which is irritating him. The pair end up fighting and then walk on foot before reaching a bar. While waiting for the next bus, Klaus plays poker with a group of men. He steals one of the men’s truck keys and Ben refuses to help, telling Klaus to fight his own independent battles; Klaus manages to drive off.

In a twist we were not expecting, especially with the romantic complications of Season 1, Allison appears to have fallen in love with a man and they are fighting social causes for the back community — she tells the man not to get his hopes up about Kennedy. Photo frames show they are married.

As for Luther in “Right Back Where We Started”, he’s an underground fighter earning his money within an illegal betting system. He breaks a man’s arm who tries to stab him. Luther appears to have a boss named Jack. If Luther was to be anyone in a world that he is lost in, it’s an underground street fighter for sure.

Allison’s husband is arranging a protest. He wants it to be full of honor and dignity. At the meeting, Mr. Mason arrives and asks what the gathering is all about. Allison tells Mr. Mason that he does not own the property before kicking him out. Umbrella Academy thematically discusses the white/black segregation policies that forced a racial divide in America.

How does The Umbrella Academy season 2, episode 1, ‘Right Back Where We Started” end?

Diego is in isolation in a straitjacket. He manages to worm out of it and escape the room. Meanwhile, the three blonde haired men that killed Hazel are looking for Diego. Lila (one of the patients) helps Diego out of the building as they are shot at. Lila and Diego manage to escape and evade the three men with the blonde hair.

Meanwhile, Luther heads to a bar and one of the strippers tells him that a young boy is here — it’s Five. Luther is not interested in talking but Five explains that he knows what it feels like to be alone in a specific time but that the world ends in 10 days and he doesn’t know how to stop it. Surprisingly, Luther says…