Episode 5 sees the family come together for the first time but they are as dysfunctional as ever, bringing back the remnants of season 1.

Episode 5 sees the family come together for the first time but they are as dysfunctional as ever, bringing back the remnants of season 1.

How does The Umbrella Academy season 2, episode 5, ‘Valhalla” open?

“Valhalla” opens in 1962 in Cape Canaveral. Pogo is opened from a box; Reginald, Grace, and scientists perform experiments on him, seemingly testing his intelligence. Pogo is sent into space in a rocket but the experiment goes wrong and Reginald uses a formula to bring him back to life. Reginald reads Ancient Greek to Pogo — the same words Five used in the last episode. Season 2 is suitably giving an origin story for Pogo — it’s a nice insight.

You can handle yourself, Lila

Back to the core story in “Valhalla” and Five asks questions of Lila because she knows how to fight too well. Diego asks Lila why she helped Five and not him — “Because he’s a kid and you’re a man”. Diego can sense she is lying and he’s absolutely right.

Sissy and Vanya wake up together in bed. They don’t want to talk about what happened because they are scared if they make it real, they’ll lose what they have. Carl is back early so they need to get out of bed. The reality is the time they live in — they will be ousted in the community if anyone finds out the truth about their relationship. Another factor is Carl — if he’s embarrassed he might become a danger to Sissy and Vanya. This was the reality of the LGBTQ+ community for years and still exists in some areas of society today.

Luther tells Five and Diego that he saw his father when he first arrived in this timeline in “Valhalla”; flashbacks show Luther getting on a Greyhound coach to find his father. At a party, he sees his father who is talking to a group and enjoying a drink. Luther tells his father that he’s his son but Reginald doesn’t believe him because he has a deep dislike for children. Luther is upset as he’s asked to leave. Back in the core story and Five states they need to get The Umbrella Academy back together. It’s taken him five episodes to say that — he couldn’t help himself!

Carl has returned and he is so happy because he’s made a big sale for his company. It’s awkward as Carl wants to get intimate and Vanya gets angry; her powers start to gather — Harlan grabs her hand and it calms Vanya down. It’s almost as if Harlan knows about Vanya’s powers and he understands how to calm them down. I wonder if this will become important later… 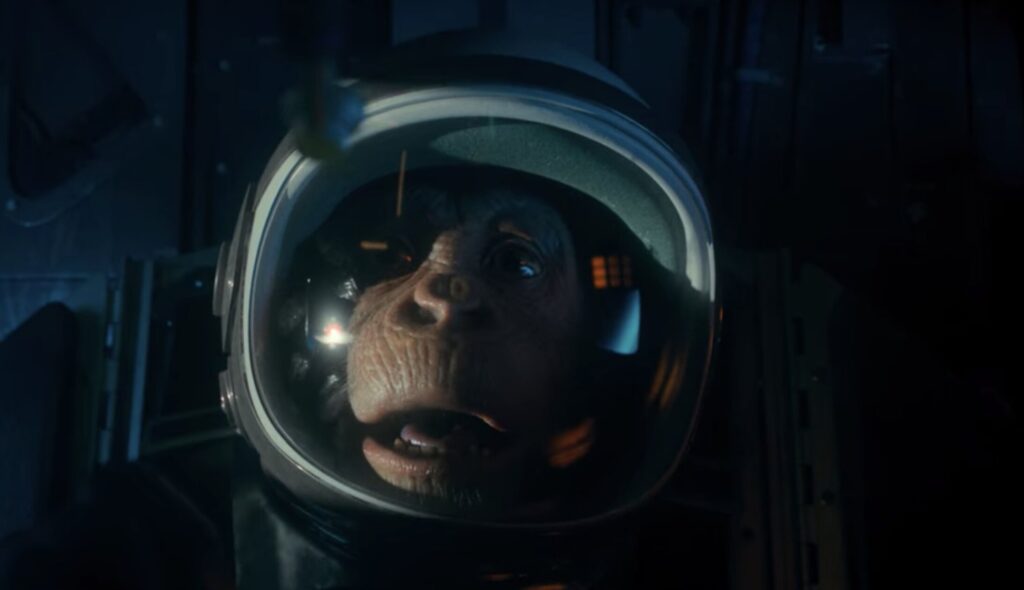 The Umbrella Academy season 2, episode 5 sees our fresh and exciting character Lila feeling like she’s on the fringe and not privy to all the information. Lila angrily confronts The Handler about the three blonde haired men attacking them and blowing her cover. She gives The Handler Diego’s knife. The Handler reveals that The Commission has no idea that they are here and she couldn’t reveal to Lila the real mission because that would have risked it.

The Umbrella Academy is finally reunited for the first time in the second season. Vanya and Allison embrace, giving that sisterly love. Klaus tells the others that Ben is not here because ghosts cannot time travel — Ben is furious. Because they decided to build up this moment, it was effective seeing the group back together — well played!

Five tells them that they have six days to save the world — the cause could be the assassination of Kennedy or it could be something independent. Diego believes that they need to kill their father. They all start blaming each other for causing rifts in the timeline but Diego believes they were all sent back to save John Kennedy — he’s stuck on this record and it gets funnier every time.

Five reminds them that he saw them all die in a war that they brought here — he explains that their father may have a reason. Luther is frustrated and walks out. While outside, Five is teased by Lila so he chases after her. Diego asks Luther why he’s a quitter — he’s still hurt by his father and asks Diego why he wants to save JFK. Diego claims they are heroes but Luther claims that their father lied.

As the pair argue, an old man drops them off an invitation — Reginald Hargreeves has requested their company for a light supper which was a rather surprising turn in the story.

Vanya, Klaus, and Allison drink and talk about the end of the world; Vanya wants to tell Sissy that she loves her; Allison wants to tell her husband the truth; Klaus wants to confront his cult. The trio has some fun and dance together. It’s a good scene, seeing the family relax for once and come up with some resolutions.

Meanwhile, as the three blonde haired men (now known as The Swedes) walk through woods, one of them is blown up by a mine. So that’s one dead.

How does The Umbrella Academy season 2, episode 5, ‘Valhalla” end?

Five continues to follow Lila and asks what her game is. He chases her around a warehouse and they fight. Eventually, Five gets Lila on the floor and asks The Handler to come out. Vanya confronts Sissy and tells her she loves her. Carl comes downstairs naked asking where his beer is and then slaps Sissy’s arse. Sissy asks Vanya to be patient but she’s frustrated that she slept with the husband and tells her they have six days — Sissy explains that she can’t come with her so Vanya walks out. It’s easy to understand the frustrations between them — it’s a difficult situation.

As the episode ends, Klaus meets his cult and Allison tells Raymond that she’s going to tell him everything. Episode 5 sees the family come together for the first time but they are as dysfunctional as ever, bringing back the remnants of season 1.