A beautiful, funny, sad film about intimations of mortality from writer/director Amy Seimetz.

A beautiful, funny, sad film about intimations of mortality from writer/director Amy Seimetz.

In She Dies Tomorrow, “she” is Amy; and Amy is weighed down by the knowledge that she is going to die tomorrow. She hasn’t received a threat, a prophecy, or a vision: it is simply a conviction, a strong bodily certainty. It gets her down – of course – but her friends can’t help relieve her of a fear which is so seemingly outlandish. Her friend catches it instead and passes it on.

Amy is played by Kate Lyn Sheil (V/H/S, You’re Next), relishing the textures and sensations of and around her home, as if the mislaying of her marbles – or limited time left on Earth – brings a new obligation to appreciate it all (even though her home is not fully unpacked), and the perfect opportunity to obsess. (Who hasn’t got a favorite tune they’d listen to over and over, given a good excuse?) Sheil is perfect for this role, both fragile and sincere, slightly mad without appearing psycho at all (well, maybe once). Amy’s closest friend is Jane (Jane Adams), who at first dismisses Amy’s mood, but later gets to know what it feels like… which for Jane means not getting out of her pajamas for anyone. Adams plays her role in the most strikingly believable way, especially that transition. We meet other cast members (who include Katie Aselton, Tunde Adebimpe and Michelle Rodriguez) via a small, swish birthday party (which could easily have had the same outcome as The Invitation); as privileged and self-righteous as they appear, their dialogue is plausible, as one by one they each realize they could/will die tomorrow.

And that’s as far as the plot goes: the film is so slight of plot as to be more a feature-length poem. She Dies Tomorrow is a study of the myriad ways people can respond to bleak feelings, whether paranoia, anxiety, depression, or straightforward doom; and indeed the way people can respond to those feelings in others. Yeah, I know this sounds heavy, but it is kind of funny in many places too; especially considering it’s about dying, and not just that but tomorrow. There are many films that present mental health as dramas, horror films, period films, or biographies, but I have great respect for films like this and last year’s Dead Dicks that demonstrate mental ill-health in an abstract or surreal way. 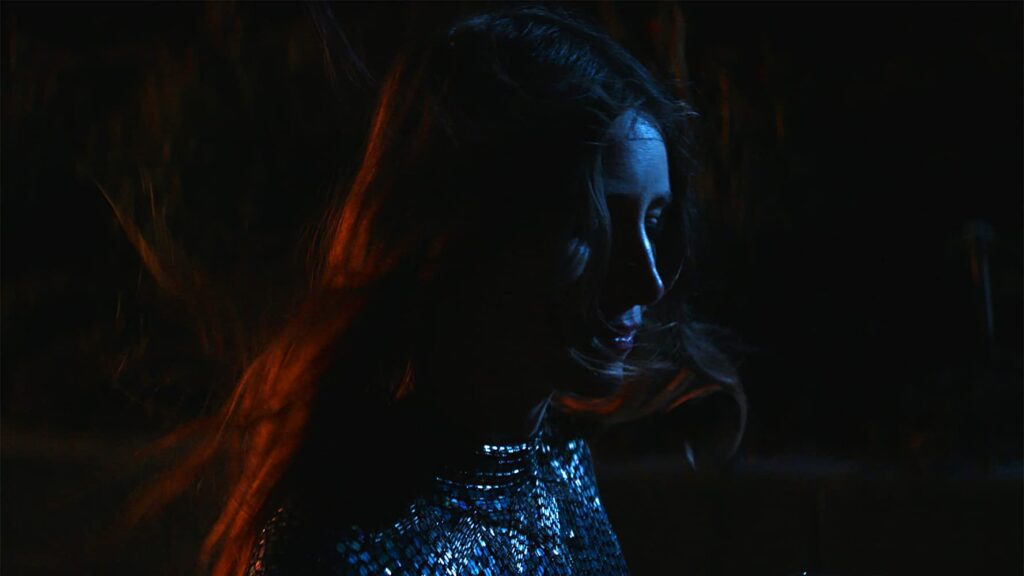 Amy Seimetz (The Girlfriend Experience) appears to direct She Dies Tomorrow with ease, each scene following the last like a stream of consciousness, though I couldn’t tell you how linear it is. The doom spreads from one person to the next like, you know, that’s what always happens; but like any virus, there’s no knowing how it started, or where it will go next. This natural acceptance of the state of things fits well with other films I know from Rustic Films, the production company behind After Midnight, The Endless, and others.

And the mad throbbing colors! I don’t even know what some of those images were of, but they seemed to build up for Amy (and the others) as the futility makes itself known. They also seemed to hypnotize Amy into accepting her frame of mind and added to a trance-like feel to much of the film. Jay Keitel’s cinematography is varied, and consistently interesting: sometimes close-up steady-cam scenes, sometimes observing from a corner. The Mondo Boys music adds to that dreamy atmosphere: it’s often so subtle that I didn’t notice it was there until it stops.

I first watched She Dies Tomorrow the day after talking to my doctor about the return of depression, and although it was tough at first (like Seimetz saw right through me!), the film was ultimately cathartic. There can be peace in accepting one’s own frame of mind, hopelessness in sharing it with others, and (perhaps) hope in knowing that it will pass. The global context is interesting, too: She Dies Tomorrow was due to premiere at SXSW (South by Southwest in Austin, Texas), one of the first major events to be canceled due to the COVID-19 pandemic. And just like the circle of friends in this film, we are all going through it, but respond in individual ways, according to our personalities and circumstances.