Comedy horror that takes a gleeful stab at tourists, history enthusiasts, the difficulty getting onto Broadway, and mob psychology.

Comedy horror that takes a gleeful stab at tourists, history enthusiasts, the difficulty getting onto Broadway, and mob psychology.

Page (Geena Santiago) is the lead actor in a small community theatre production in Salem, which is dedicated to showing tourists the true story of the famous witch trials. She’s on the verge of taking her (modest) talents to Broadway, when – during her last performance – an audience member keels over and dies, apparently as a result of the curse she uttered. Mass Hysteria breaks out in the form of a modern-day witch hunt.

Directed by Arielle Cimino and Jeff Ryan, and written by Jonathan T. Coleman and Christopher O’Connell (the latter also a writing partner in their first film, YouthMin), Mass Hysteria is a short but entertaining film. The story is a mystery about unexplained deaths, combined with paranoia, humor, and blood… interesting: that’s similar to what I said about Beast Within. 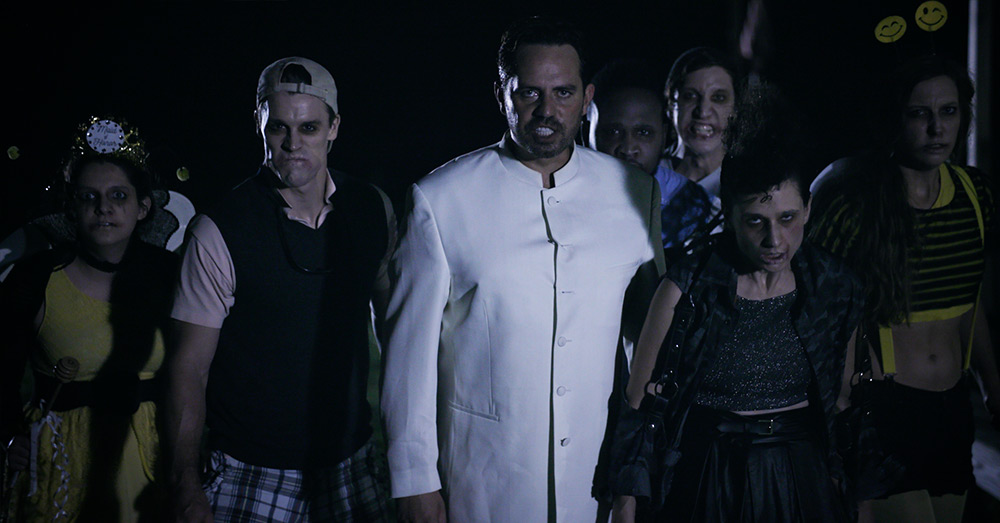 The writing is pretty good in Mass Hysteria, giving the audience some snide humor about how different people treat history, some very well-drawn characters, and some surprising twists and turns. The tourists may be a generic pack of louts, but the acting troupe is believable enough that I feel I have met them; certainly some like them. The sense of place is notable here: although we see nothing of the modern town of Salem, the face that is presented to tourists – a blend of historic with sensational – comes across very well.

Mass Hysteria starts with an eye-catching introduction and gradually increases pace via death and panic. The comedy aspect of the film comes more from outlandish situations than jokes as such, and thus the pace serves it very well. It isn’t a scary film, nor does it try to be: the horror is in the subject matter, and in some violent confrontations. The practical effects are more than decent: overall, Mass Hysteria is an entertaining film.

The only negative aspects, unfortunately, are the fairly lightweight acting and the film’s short duration. But honestly, the team has packed so much action and observant writing into the film that the acting quality went unnoticed after a very short time, and the sixty-five minutes felt significantly longer.