It loses its way a bit by the end, but for most of the time, Love & Anarchy is a funny and absorbing (and decidedly adult-skewing) workplace dramedy.

It loses its way a bit by the end, but for most of the time, Love & Anarchy is a funny and absorbing (and decidedly adult-skewing) workplace dramedy.


This review of Love & Anarchy is spoiler-free.

Netflix’s new Swedish original, the raunchy, adult-skewing workplace dramedy Love & Anarchy, surprised me with its frankness. To be honest, it kept surprising me all the way through with little moments of oneupmanship that I’m under an obligation not to spoil. Just take my word for the fact that even when you think you’ve seen it all, you probably haven’t. And that’s mostly a good thing.

There are other good things about the show, too. Not since the first few episodes of HBO’s Run has there been this much legitimate sexual tension between two characters, and the crackling chemistry powers the whole thing. One half of this central dynamic is Sofie, a careerist consultant whose job is to devise strategies for ailing analog businesses to survive in the future. She’s married to an indescribably condescending commercial director, Johan, and together they have two children, Isabell and Frank, though it just occurred to me that I’d completely forgotten Frank existed until just now. Young enough to be her child, but of no relation, obviously, is Max, an IT technician temping at the publishing house Sofie is shepherding to modernity. They meet, and before long they’ve developed a flirty game of dares that continues all throughout the season and raises in intensity all the while. 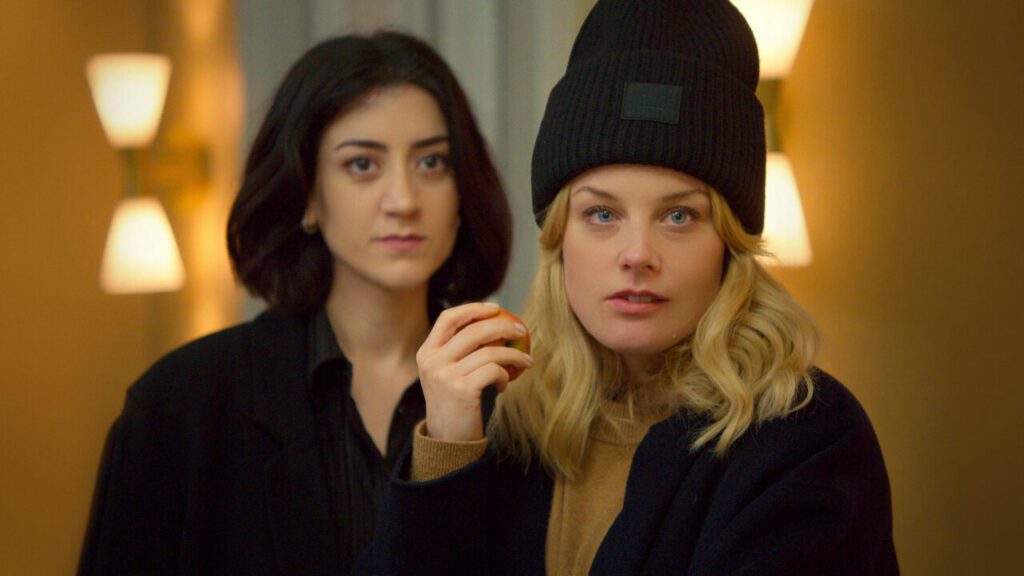 That word, “intensity”, is a pretty good one to use in relation to Love & Anarchy. Sofie is intense about everything; the dares game is the first time we see her have a laugh, and even then it takes a while, though admittedly for understandable reasons. There’s lots of stuff here that would probably sound a bit creepy written down, but in execution, it’s largely pretty compelling, mostly because it feels so believable. The fact the show’s quite obviously aimed at adults helps with that; it’s unafraid to be foul-mouthed and full-frontal where necessary, without ever really feeling gratuitous. Raunchy, certainly, but usually to make a point of some kind, not solely to titillate.

Thematically-speaking there’s little here we haven’t seen before: the unexciting routine of a long-term relationship, the excitement of a new and/or forbidden romance, or even the possibility of one, and the inexorable march into a future of technology, social politics, and business that not everyone will necessarily be comfortable with — or even able to understand. That culture-clash is felt very strongly in the publishing house, where different dilemmas frequently pit the various members of staff — representing staunch traditionalism and more contemporary crusading social justice — directly against each other, but it’s the central pairing that this show is most interested in, and rightly so.

Love & Anarchy is ideal for a midweek binge. It’ll suffer for being released on the same day as The End of the F***ing World, but at just eight half-hour episodes, it’s easily consumed and digested. There might not be too much on its mind, but there’s plenty to fuel a sexy comedy with enough serious character drama that it feels like there’s a point to it, even if that point gets a bit muddled by the end.