“Sturgeon Season” keeps NCIS in the pre-Covid past for now as Fornell tries to bust up a drug ring and, elsewhere, a cadaver gets conveniently misplaced.

“Sturgeon Season” keeps NCIS in the pre-Covid past for now as Fornell tries to bust up a drug ring and, elsewhere, a cadaver gets conveniently misplaced.

The advantage of having a long and storied history like NCIS does is that you can call back to it whenever you like. You can build tension by showing snippets of things to come – familiar characters doing unexpected things, for instance – and play with longstanding expectations to get the desired result. That’s very much the kind of thing that “Sturgeon Season” pulls off in its temporally unreliable cold open, its flashing back to prior events, and its eventual settling on a fixed period for the latest – eighteenth! – season to stick with for a while. In this case, it’s November 2019, which thankfully means no Covid-19.

It also means an answer to a fan nit-pick, which was why Gibbs never helped Fornell to take down the drug ring that imperilled his daughter, Emily. As it turns out, he did, and the events of “Sturgeon Season” depict that, as well as the origins of the mysterious shiner that Gibbs picked up off-screen during last season’s episode, “Musical Chairs.”

Despite Emily having apparently been saved from opioids, so to speak, the fight against the drug runners is far from over according to Fornell, who tells Gibbs he has a lead on an errand boy named Josh who could lead them to the Big Bad in charge of the whole counterfeit opioid operation. The bruise comes from Fornell socking Gibbs in the eye while the latter is trying to pull him out of a strip mall medical clinic. As it turns out, he’s not exactly in a reliable mood. 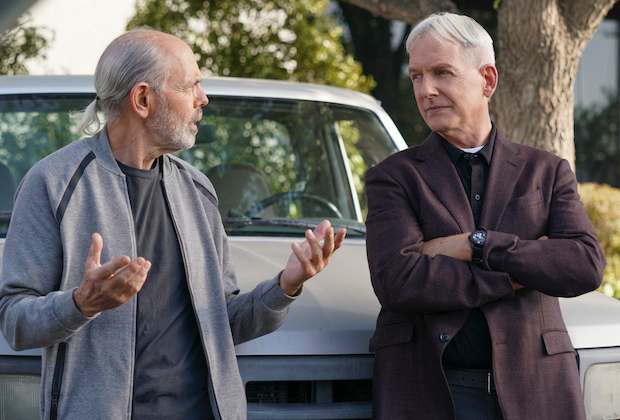 The other plot of NCIS season 18, episode 1 concerns the corpse of one Marine corporal Richard Darby disappearing from the NCIS autopsy room and almost sees Jimmy Palmer get blown to bits by a car bomb while on the way to meet up with his night shift counterpart, Ronnie Tyler. Both are assigned a protection detail. Darby, as it turns out, was a kind of nutcase doomsday prepper with really terrible neighbours, as we’ll see shortly.

When Agent Tyler dismisses her protective detail, that raises some alarm bells, and she’s caught on the cusp of going rogue, at which point she’s forced to explain that a masked man broke into her home and kidnapped her daughter in exchange for Darby’s right hand. The importance of that specific appendage becomes clear later, after the dropping off of a dummy hand sends the nearby perpetrator running… right into a speeding truck. He’s one of Darby’s awful neighbours, disguised as a hobo, and he wanted the right hand to open a safe inside Darby’s RV, where he believed he’d find Darby’s life savings in a hefty amount of cash. That’s a pretty mundane motive for a rather outlandish case. Tyler’s daughter, meanwhile, is found safe and sound through a trap door below the RV.

With all this speedily handled, “Sturgeon Season” checks back in on Fornell, who has managed to track down Josh – who’s dead in his car. Pilfering some items from Josh’s body, Fornell tells Gibbs to check back with him in two weeks when everything, apparently, will make sense. Do we think that’s going to be the case? At this point, who knows?

Thanks for reading our recap of NCIS season 18, episode 1, “Sturgeon Season”. For more recaps, reviews, and original features covering the world of entertainment, why not follow us on Twitter and like our Facebook page?