The Walking Dead: World Beyond season 1, episode 8 recap – “The Sky Is A Graveyard”

“The Sky Is A Graveyard” puts Silas on trial, so to speak, after the recent, violent death of an ally prompts a lot of painful reminiscences.

“The Sky Is A Graveyard” puts Silas on trial, so to speak, after the recent, violent death of an ally prompts a lot of painful reminiscences.


This recap of The Walking Dead: World Beyond season 1, episode 8, “The Sky Is A Graveyard”, contains spoilers. You can check out our thoughts on the previous episode by clicking these words.

You’ll recall that at the end of last week’s episode, it looked very much like not-so-gentle giant Silas stoved Uncle Tony’s head in. As we rejoin the gang in “The Sky Is A Graveyard”, opinion is very much split on the matter. While a tearful Silas sobs outside, bound and captive, the others debate what might have happened. Have they seen Silas lose it before? Indeed. Is Percy dead too? Probably — his blood trailed down to a river with a current he couldn’t possibly have fought (he definitely isn’t dead, but whatever.) Perhaps most importantly, does Silas have cause to hurt people trying to help them? Huck thinks so, citing his bag full of Iris’s drawings as evidence.

For our sins, we dip into more Silas flashbacks as we see him flip out and batter his abusive dad’s face into mush. In the present day, Silas’s fondness for Iris is being pushed as probable cause, especially since she was getting pretty close to Percy. While Huck and Felix debate what to do with him, Elton goes to speak to Silas, since he “disagrees with their hypothesis” (nobody speaks like that!). Elton thinks that Silas only resorts to violence to protect those he cares about, and he resolves to find proof that he wasn’t involved in Tony’s death.

In further flashbacks, we see Silas being offered help from a neighbor, who is obviously very familiar with his situation on account of the thin walls. She’d like to speak with Silas’s mother over the “piece of human refuse he calls a father”, but she’s at work, and calling the cops isn’t a good idea since Silas’s dad is on the floor in the hallway — except, after sending the nice lady on her way, Silas turns around to discover he isn’t anymore.

When Felix speaks to Silas, the lad explains that his dad used to his blackouts after which he couldn’t remember things, too. He’s scared of being like him, which Felix can understand, but it doesn’t really help the decision-making process. In a flashback within a flashback, Silas recalls happier days of his dad being a perfectly pleasant, doting father — is having two extreme personalities just typical of an abuser or did something happen to Silas’s father to trigger his outbursts?

The whole issue begins to cause a bit of a rift between Iris and Hope, too, since Iris is very much on Elton’s side, refusing to believe that Silas killed Tony, or at least without good reason, whereas Hope has taken on Huck’s advice that every decision she makes needs to further her efforts to find Leopold. She’s also curious about how many chances people should get, given she still hasn’t forgiven herself for the one major mistake she made — shooting Elton’s mother — and Silas has made several that the whole gang is aware of. 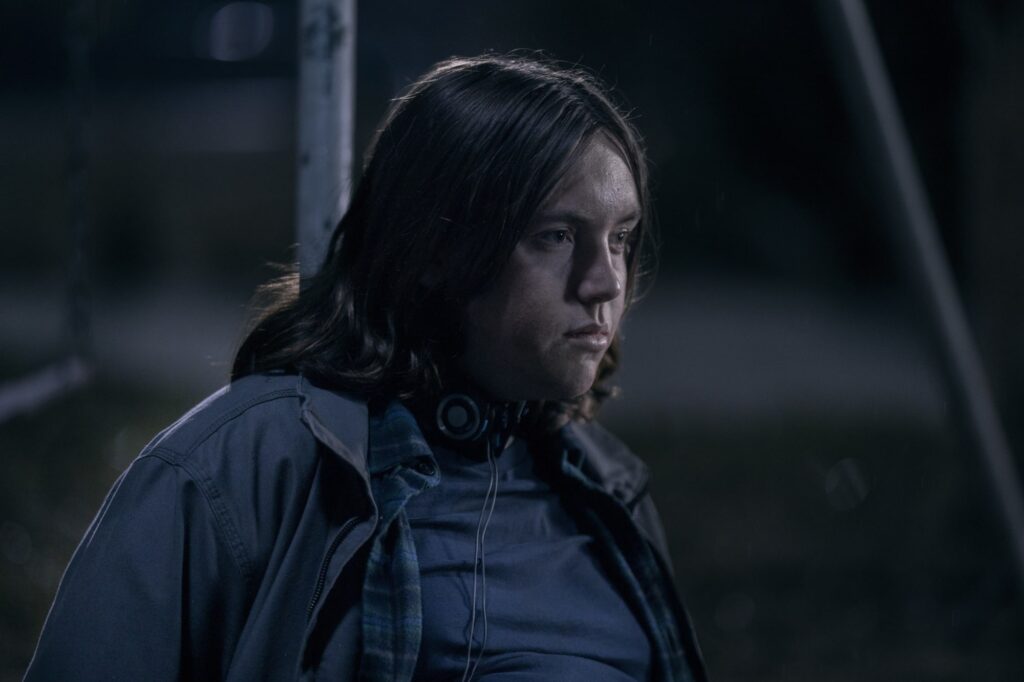 Hope says to Elton that this is a “lost cause”, which seems a bit defeatist to me. But he’s very hung up on the idea of everyone being a family, and of a family helping each other no matter what, which is obviously clouding his judgment when you consider that Silas might have actually beaten someone to death. In the past, we see Silas search for his missing father upstairs, finally finding him zombified — he must have succumbed to the beating. While he takes shelter in his room, he remembers another positive interaction with his dad, and once again there’s no indication that at that point he was anything like how he ended up. If The Walking Dead: World Beyond season 1, episode 8 is trying to make a point here about the conflicting duality of domestic abuse, how the awful memories are wrapped up in the good ones, it isn’t doing a very good job of it — but props for trying, I suppose.

Silas’s musical interlude is interrupted when his mother returns home and almost ends up as his dad’s entree. He’s forced to intervene and stove dad’s head in for the second time that day, this time for good, but it leaves his mother terrified and in tears. In the present day, a walker breaks down the fence and crawls steadily towards Silas, who just chills out and decides enough is enough. He’s ready to accept his fate. But when he comes to, Hope is standing over him, having saved him from the walker. She tells him she thinks he probably did it, whether he meant to or not, but enough people have died already — that’s why she saved him.

“The Sky Is A Graveyard” takes its title from a conversation between Iris and Elton as they lay looking up at the sky. Hope, apparently, once compared the walkers to dead stars still casting their light across the night sky; Elton, obviously not grasping the metaphor, explains how stars visible to the naked eye are close enough that their decay would be obvious, so all the stars you can see are very much alive. Thanks for that, Copernicus. Either way, it seems to trigger something in Iris, and the next morning she goes to see Silas to ask him to tell her that he didn’t kill anyone. He can’t, obviously. He smilingly declares himself a killer, apologizes for her having met him, and tells her he’ll never forget her. He’s also freed himself at this point, so after the conversation, he leaves.

With Silas gone, everyone’s preparing to move on. Elton has come to the very difficult decision to leave in order to join Silas, which he explains to Hope in his usual dorky fashion. He’s still keen on the idea of finding his mother and sister as well, while he’s out there, which compels Hope to confess that she shot his mother. The next we see him, he’s staggering outside under the weight of all his bags, still visibly tearful at the news. We also see Silas walking down the road, headphones on, beating zombies over the head. We see his walkman, abandoned, as he continues on, emotionless.

In something resembling a compelling twist, we learn at the end of “The Sky Is A Graveyard” that Huck is reporting directly to Elizabeth — she’s undercover, protecting “the asset”, whoever that is. After such a dry episode, that development goes some way towards adding value, but it’s mostly too little too late. Still, it’ll be interesting, sort of, to see how that develops going forwards.

Thanks for reading our recap of The Walking Dead: World Beyond season 1, episode 8, “The Sky Is A Graveyard”. For more recaps, reviews, and original features covering the world of entertainment, why not follow us on Twitter and like our Facebook page?

1 thought on “The Walking Dead: World Beyond season 1, episode 8 recap – “The Sky Is A Graveyard””