Claire gets dangerously comfortable in her illicit relationship with Eric, and the house of cards is likely to come tumbling down any time now.

Claire gets dangerously comfortable in her illicit relationship with Eric, and the house of cards is likely to come tumbling down any time now.


This recap of A Teacher season 1, episode 5 contains spoilers. You can check out our thoughts on the previous episode by clicking these words.

This week’s episode of A Teacher was interesting, to me, since it kind of upended my early suspicions about the nature of Eric and Claire’s relationship. See, at first, I figured Claire was manipulating Eric into believing there were serious reciprocal feelings between them so she could continue to exert the power over him that she clearly lacks in her passionless marriage to man-child Matt. The evidence seemed to support that theory. But A Teacher episode 5 goes in the other direction. Here, we see Eric begin to exert control over Claire and see Claire’s almost childlike infatuation lead her into an ill-judged confession. These things all amount to what is clearly a turning point in the narrative, at exactly the halfway point.

The first clue is that Claire has sneakily organized a remote romantic retreat for Eric’s eighteenth birthday, where they can just hang around and drink and be all romantic while opening up about their respective home lives. To see them frolicking and making cheeky little videos – not that cheeky, don’t worry – and having fun, you could almost buy them as a couple, but their conversations are deliberately pitched in a weird way. Claire’s complements to Eric are halfway between a loving spouse and a proud mother. Later, when she suggests going to a bar, she’s awkwardly reminded that Eric has no ID. His age is never completely forgotten about, even if it’s never directly mentioned. 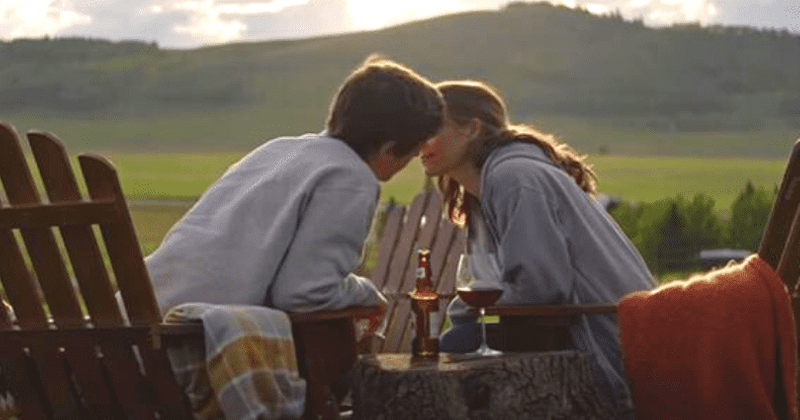 What’s also never forgotten about is that this is all temporary. After their last night together they’re going to have to return to their lives and shroud their relationship in secrecy once again, which means that Claire is going to be attending Matt’s gigs and playing happy families, which Eric takes with obvious ill grace. This is when he starts making sexual demands, in a vaguely pathetic attempt to assert some control, but Claire’s submission is telling. When he later confesses to loving her and she returns the sentiment, you get the sense for the first time that they both believe it. Their subsequent lovemaking and romantic drive home occur in a new light of authenticity.

And it’s Claire who lets this authenticity go to her head. In an obviously tactical maneuver, she invited her colleague, Kathryn, to Matt’s gig, and while he and his buddies jam they steal a bottle of tequila and head outside like naughty schoolgirls to get drunk and talk boys. Kathryn has seen a change in Claire and knows she’s having an affair, and as she giddily interrogates Claire about who it is, you can just see where the conversation is going. Lo and behold, Claire proudly confesses that her new suitor is Eric, and immediately recognizes the error of her ways. The instant tonal shift here is excellent, neatly encapsulating that crippling feeling of realizing immediately that you’ve said the wrong thing. Kathryn is disgusted and vows to report her. Claire’s paltry defense – that Eric is eighteen and above the age of consent – falls on deaf ears. This, I think, is the first time either Claire or Eric has actually referenced his age outright, and it’s telling that Claire only elects to do so in defense of her actions.

The fact she even can try to defend her actions is, I think, what makes A Teacher compelling, since if this was about a male teacher seducing a female student it’d be a very, very different show. There would be no ambiguity about whether or not what Claire is doing is wrong. Of course, it is wrong; it’s a gross abuse of power and will likely cause Eric longstanding emotional trauma. But, however much it should be, a predatory relationship like this is not the same when the genders are reversed. We reflexively reject the notion that a big, confident, handsome eighteen-year-old man could be a victim of cute, tiny Kate Mara. The show’s bold in that sense. It would have been an open goal to tell another story of a predatory man abusing a young, vulnerable woman. What sets A Teacher apart is how it exposes the hypocrisies and biases at the heart of our culture.