Seven friends play a mysterious game, and with a name like “Game of Death”, what do they expect? I didn’t expect much, but it was bright, fun, creative, and splattered with blood.

Seven friends play a mysterious game, and with a name like “Game of Death”, what do they expect? I didn’t expect much, but it was bright, fun, creative, and splattered with blood.

This isn’t the Wesley Snipes vehicle, nor the Bruce Lee film: this Game of Death was popular in the genre festival circuit in 2017 and has now reached digital home release. I didn’t have terribly high expectations, though I guess I enjoy watching pretty young things explode as much as the next middle-aged cynic. As it turned out, I liked Game of Death more than I expected to.

Game of Death is about a bunch of friends lazing about on a sunny afternoon. They insult each other, screw each other, bore each other, as teens do; until one of them spots a game, and suggests they might play it together. No-one has played it before or knows what to expect beyond the cursory instructions (which are displayed at the opening of the film):

“With the clock ticking, is life worth living?

Make a choice, you or I; without decision – one will die.

In this Quest, some are left behind.

This game will blow your mind.”

A numeric display spins until it displays the number 24, and suggests this is the number of people who need to die to conclude the game. No-one takes it seriously: when one of their number suddenly meets a bloody end, they leap to the conclusion that there is a shooter in the vicinity. Someone else’s head actually explodes and they know the game is real. What follows is a mixture of nihilism, panic, and trigger-happy catharsis for the remaining friends, with a bit of ethics thrown in towards the end.

There’s not a lot to remark about the seven friends: Tom (Samuel Earle), Beth (Victoria Diamond, the narrator in Creeped Out!), Ashley (Emelia Hellman), Mary-Ann (Catherine Saindon), Tyler (Erniel Baez Duenas), Kenny (Nick Serino) and Matthew (Thomas Vallieres) are empty-headed, vain and largely selfish. The roles weren’t terribly demanding, and they all played their parts well, even some more than decent screaming. The one who stood out was Earle, as his Tom seemed to embrace the opportunity the game provided; I’m sure it wasn’t just the white shirt that brought Funny Games to mind here. 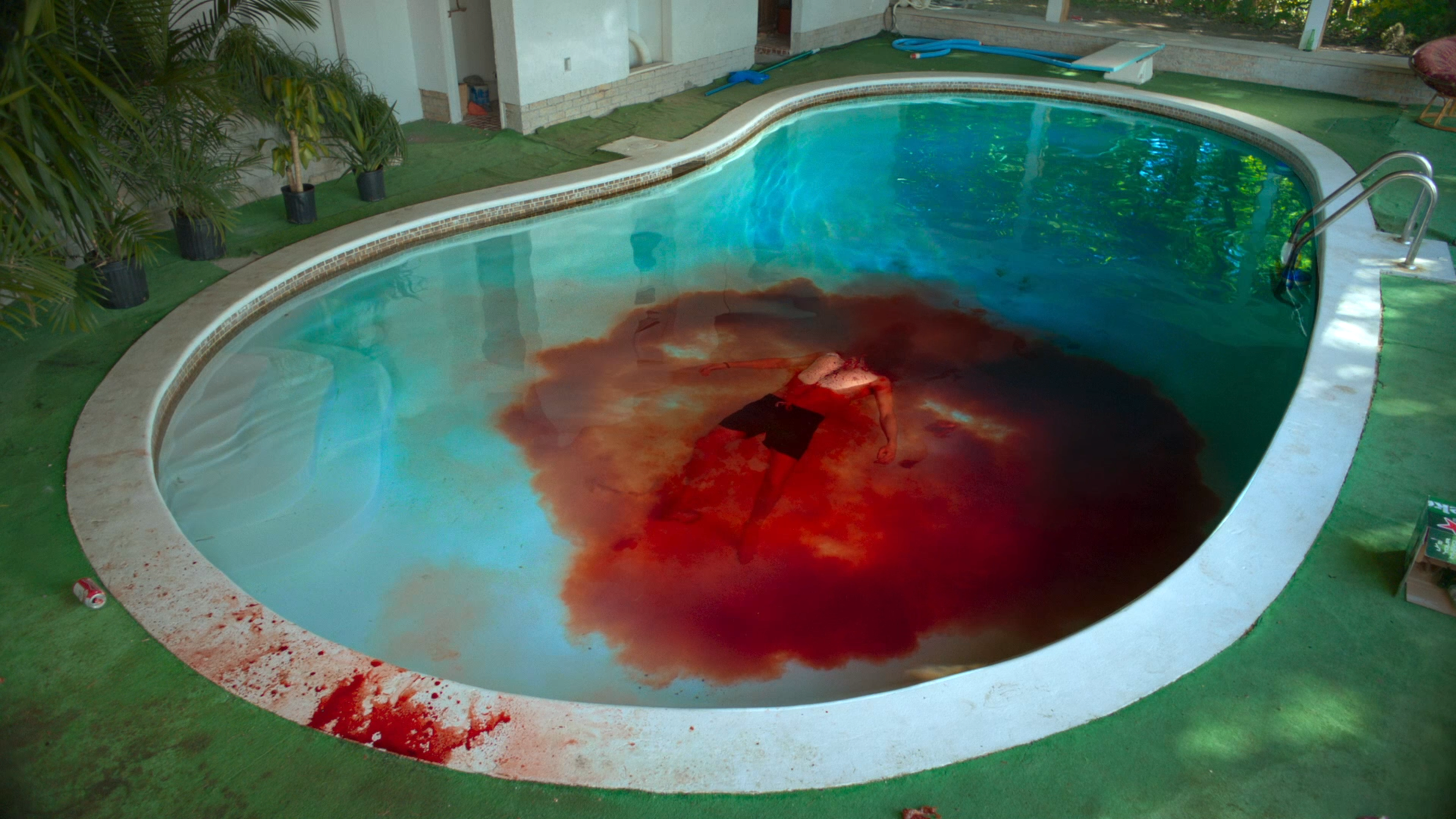 The style of the film overall reflects this crowd: bright, energetic, and relishing the requisite violence. Game of Death is short (less than 80 minutes), action-packed, and very gory, not just violent but with the camera dwelling on the deaths and the grisly after-effects. The special effects are excellent, while also being (naturally) over-the-top. Here and there, though, there is also a dreamy quality to the film, especially near the start as we get to know the characters; at first, I almost expected something in the style of It Follows. There are also some video-game style animated sections, and a few brief breathers while we indulge in a manatee documentary, and these seem to be there to highlight or contrast with the teenagers’ superficial nature.

I’ve watched young people killing each other for years, from Battle Royale to this year’s Triggered. They are all entertaining in their own ways, and – so far – utterly different. Directors Sebastien Landry and Laurence Morais-Lagace have given us a neatly unpredictable bit of bloody escapism that doesn’t try to say anything deep about mortality or friendship (though the silly kids have a go at those topics). Instead, if anything, what Game of Death demonstrates is just how damned hopeless and shallow young people can be.

Now I’m itching to tell you something about the park ranger (Jane Hackett), the only adult in this film with any real screen time. But I’ll bite my proverbial tongue and allow her to speak for herself.

Game of Death is available on Digital Download and can be bought here.