The Oak Room: an interview with director Cody Calahan


The Oak Room, an intelligent film noir from Canada which was a hit at both Grimmfest and Mayhem Film Festival last year, is now available on digital download here in the UK, and in other countries very shortly. In anticipation of this, I recently met with director Cody Calahan to talk about what it was like to make this film, strikingly different as it is from anything else he has made.

First of all, I asked what it was like to adapt a stage play. “It’s funny,” answered Cody. “The idea of it was definitely scary. Ari Millen, who plays Michael in the movie, was in the stage play. He sent me the script for the play because he thought it could be adapted into the film. I sort of ignored the script for a while, because I couldn’t see myself adapting this play, and it sounded like a lot to take on. But once I read it, it jumped off the page, and Peter Genoway [the writer] was so open to some of the ideas I had. The actual process of adapting it was awesome, and a great experience: it was just before that, I was nervous of doing something like that. And also because the play was so great, I wanted to do it justice, and not butcher a beautiful thing.”

Cody hadn’t seen it on stage himself though. “No, I was not in the country when it was out. But Ari – we’re childhood friends – kept me updated, and I read a bunch of reviews. It was quite a hit at the fringe festival, won Best New Play, I believe.”

The original script, like the film, was set in Canada. “Oh yes, very Canadian from the get-go.” 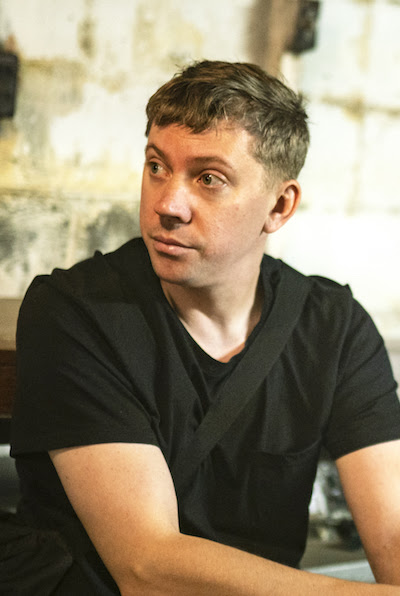 Considering Cody’s previous films, I also had to ask what was it like moving from horror to noir thriller? “Good,” said Cody. “I definitely think the film was more in tune with stuff that I wanted to make; I felt more comfortable and at home making that than a lot of the films I’d made. The one I made before The Oak Room, called Let Her Out, was an angry movie: the films you make are a reflection of where you are at that time and I was confused back then. But The Oak Room felt like the right film to make, natural, a progression for our company and myself as a filmmaker. It felt like a step in the direction we wanted to go as a team.”

The Oak Room featured only two sets and just a handful of cast. I asked whether this was a restrictive or liberating package to work with. “When we were adapting it, I wanted to do all these significant camera moves, I wanted everything to be blocked out and every single moment to be planned. Then as we got closer to shooting, I started to abandon the techniques I’d used in other films and really got out of my comfort zone for this one, which felt amazing. We were doing fifteen page takes and planning where people would go but just letting the actors move. We shot these long takes and then had conversations about the takes and so it was a different way of making a film for me, and I really enjoyed it. Some of the techniques we used in that I’ve used since, and they’ve worked, which was great. You learn something new every time.”

I guess so; especially thinking of that film as being about storytelling: there’s plenty to be learned there. When I rewatched the film to prepare for this interview, I thought I might show it to my son, now fourteen, who is a storyteller by nature. I asked Cody if he has any advice for someone like him. “Yeah, I wish I could go back and tell myself to make more. I think I was so concerned with things being perfect that I would write, but not even try it: I wouldn’t even know if it would work or not, just decide it wasn’t going to work. I would tinker with a thing before I would go and make it and I made a few short films that were maybe better at the beginning and I just over thought it. You just have to make stuff, and the more you do, the better you get. And then when you feel comfortable to make your feature, or whatever, do what you can to make the script as tight as possible; because you can’t fix the mistakes at the beginning, you can just Band Aid them, and the audience will see right through that.”

I was laughing at this roundabout answer: don’t be a perfectionist until you need to be? “Yeah: don’t overthink it until it’s time to.”

On the topic of kids, Cody had dedicated The Oak Room to his son, Bodhi River Calahan, so I asked what was the story behind that? “There wasn’t an intention from the get-go to do that. We had shot all the exterior scenes before the Canadian winter ended, and then we had some time off when we were scouting and we couldn’t find the right bars (we ended up building those two sets; the two bars are the same set redone), so in between shooting the exteriors and the interiors, my son was born. As you know when you have a kid your perspectives change: small things become big, and big things become small, and I had a lot of fear that I think I brought to the project. Just going through the process of becoming a new father and wanting to be the best father I could be, follow in my father’s footsteps (I can only make movies because of my Dad and his support) so I was dealing with a lot of that at the time; but it was only when I watched the fine cut, before adding in the sound mix, that it felt right to dedicate it to my son. That wasn’t the film itself, and the content, but just who I wanted to be as a father is the opposite of the toxic masculinity that’s in the film: it’s almost a dedication from me to him that it’s a movie about fathers and sons and it sheds light on the insecurities that men have, and the over-toxic stuff that goes on and gets passed on. And it was almost ‘here’s all the things I don’t want to do, but I’m aware of.’ That’s a long-winded answer, but that’s why it felt right.”

That was really interesting, not least because I hadn’t seen every personality in the film as being negative or “toxic”. There’s a great deal of richness about the relationships, and plenty to learn from. I asked Cody would he be happy for his son to see The Oak Room when he is older. “Oh definitely. I think when he’s at the right age; maybe I’ll wait until he’s fourteen: hopefully I’ll be as proud of it in fourteen years as I am now. We’ll see.”

Looking forwards then, I asked what Cody is working on next. “It’s been a busy year. Right after The Oak Room, I directed a film called Vicious Fun, so we’re just finishing the festival run. It’s been a bit crazy releasing two films at the same time like that (and utterly different), even at times when we’re not flying anywhere. This year, we’re finishing off Vicious Fun press and festivals and so on. Then we have a script that the partners behind Vicious Fun are behind; I can’t talk about it yet, but there should be a press release in the next few months. It’s more in the world of Vicious Fun, but a bit darker.” Sounds like one to look out for.

Having mentioned not flying, I asked what work has been like in this world of COVID. “A lot of Zoom calls,” said Cody. “Maybe too many, some days. But a lot of finding new ways to connect with other creative talent; writers, directors, and so on. Using Zoom has been welcome actually because normally I’d be flying a lot, but I’ve been at home with my son every day for the first two years of his life. In such a negative time, that’s the positive I’m trying to take away: a lot of time with him and a lot of writing. I’m finishing old projects: I don’t know if I’ll make them, but it felt good to finish writing scripts that I’d had hanging around for five years.”