Though it exists purely for fans, Dead Space: Downfall is a gory slab of survival science-fiction that forms a useful part of the broader mythology.

Though it exists purely for fans, Dead Space: Downfall is a gory slab of survival science-fiction that forms a useful part of the broader mythology.

As a general rule, video games make terrible movies. This is a fact. Browse briefly through the catalogue of German madman Uwe Boll. Take a peek at the litany of big-budget, big-screen adaptations, from Hitman to Need for Speed to Warcraft and Assassin’s Creed. All s**t. All unnecessary. There are many reasons for this. One of them is that most game stories are profoundly silly. Plenty of reasons for that, too. The action-oriented video game, in particular, has inherent dramatic limitations, most of them related to the player’s (justified) expectation of gameplay. Storytelling in games has to account for a unique form of audience disruption. The narrative needs to be interrupted every few minutes for as long as it lasts. Very few stories can survive that kind of trauma, but very few gamers care – they’re there for the interruptions. To play. When you adapt a video game story, when you make it passive, you lose what makes video games wonderful. Video game stories are parasites. They can’t survive without their hosts.

The Dead Space games are action-oriented sci-fi horror adventures that, like a lot of video games, depict situations that exist beyond the parameters of human experience – in this case, the slicing and dicing of space monsters with various industrial tools. It’s tough to dramatize that. The Dead Space games also concern telepathic alien artefacts and the bizarre cult that worships them, which, again, is hardly fertile creative territory. You’ve seen such things before. In the games, they’re functional hooks on which to hang the dismembering and impalement, and that’s all they need to be. In Dead Space: Downfall, an animated collaboration between the games’ publisher, Electronic Arts, and Team Roman, they’re questions without answers. 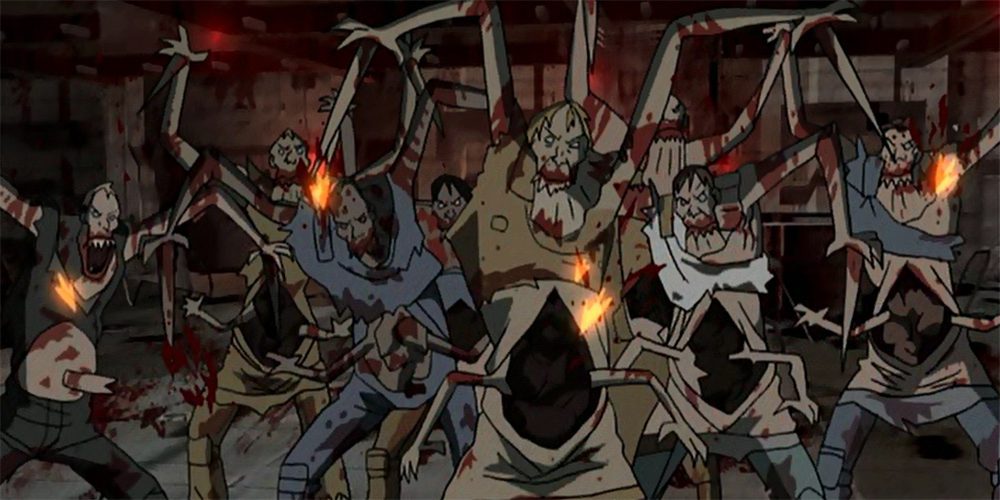 Downfall provides a helpful counter-argument for this lacklustre explication – it’s a prequel to the original Dead Space, it’s closing moments set within minutes of the game’s opening, and it’s clearly intended to function as a portion of the overarching storyline. The assumption is that anyone who watches Downfall will have already played Dead Space, which is not unreasonable. The film, which runs for a lean 75 minutes, has no need to waste precious time establishing mythology and backstory because the games have already done that. Instead, it frontloads a hasty summarisation: The Church of Unitology, a devout alien-worshipping religious cult, wants to uncover a talky monument known as a “Marker” from a dead planet called Aegis VII. To do it, they plant several of their members and sympathisers on the USG Ishimura, a “planet-cracker” (and the first game’s setting) sent to lead the excavation.

With the necessary narrative components in place, Downfall transitions into a surprisingly well-drawn survival story – literally and figuratively. The film’s principal selling point, one assumes, is its excellent art and animation; an intentionally muted colour palette lends the dark corridors of the Ishimura a gloomy mechanical soullessness. A sense of place. Not a place you’d like to visit, of course, but that’s half the point. The under-lit hallways aren’t supposed to be homey. They’re supposed to be cold, hostile, and increasingly bloodstained. In the Dead Space universe, alien Markers emit a concentrated electromagnetic signal. It drives intelligent life to homicidal and suicidal behaviour. It converts and reanimates dead tissue. It eventually, through a combination of these things, reconstitutes the crew of a spaceship into an army of savage, necrotic mutants. This is the Dead Space way. Everyone dies. Everyone comes back. Everyone dies again.

Alive, for now, is Alyssa Vincent, a security officer who must lead a ragtag handful of her crewmates on a mission to summon help, and, more importantly, prevent the Marker from being taken back to Earth. It should come as no surprise that all of these characters eventually die. This isn’t a spoiler. The inevitability of the crew’s demise is integral to the film’s sense of urgency. Knowing that bad things are going to happen is not the point. You don’t know when, or how, or to whom, and those are the important questions atop of which suspense is built. Many of the slower scenes are wracked with it. The gradual onset of dementia creates a gruesome guessing game. Who’s going to succumb next? What will the consequences be? The action, when it comes, is exciting and visceral, but it mostly works thanks to the expendability of the cast. 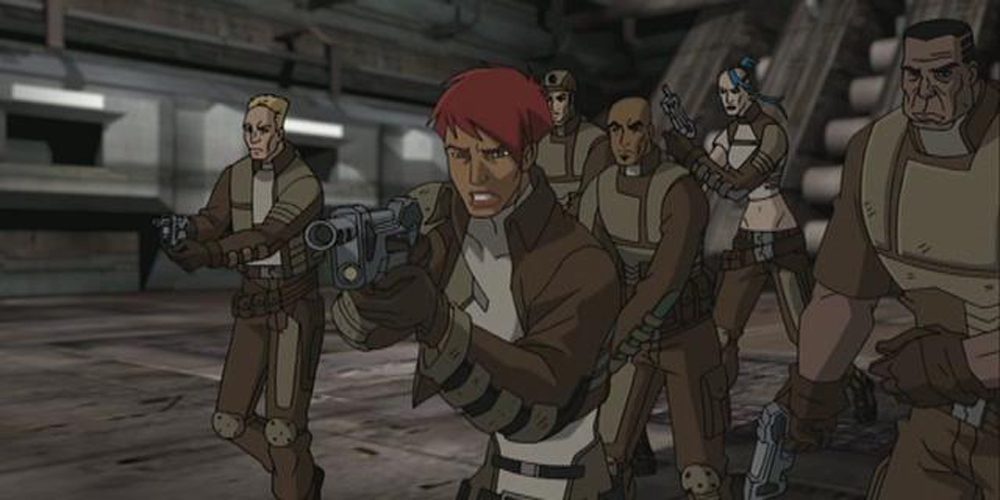 And, frankly, Downfall’s characters are not interesting or likeable enough for you to care about their fates either way. Most are stock genre archetypes, and the couple who aren’t are lost amid all the carnage. You have to imagine this is intentional. This kind of film has no time or space for deep and nuanced characterisation. Doesn’t need it. Do these people have limbs that can be ripped off, blood that can spurt, bodies that can be sacrificed for the greater good? If the answer is yes, you’re all set.

For me, this kind of s**t is entertaining. Substantially flawed, of course, and of absolutely no use to anyone who doesn’t already have a loose understanding of the mythology’s finer aspects, but entertaining nonetheless. I wouldn’t recommend it to anyone who isn’t a fan of the games, but anyone who isn’t a fan of the games wouldn’t be interested in Downfall anyway. It’s an arbitrary criticism. This thing exists purely for fans. It’s a useful component of the broader Dead Space universe, and a gory slab of survival science-fiction meant to tickle whatever part of the brain responds to such things. It could be more, but it isn’t. And I’m mostly fine with that.