Just a little over a year ago, The Duffer Brothers came out of nowhere, slyly dropped their project into the world, stepped back, and watched as we all devoured Stranger Things. This Netflix show is a careful, loving homage to just about everything that was great (and sometimes awkward) about the 80s. When I tell people about it (for I have become a Stranger Things apologist), I say that it’s like Steven Spielberg, Stephen King, and J.J. Abrams all got together to make a TV series scored by John Carpenter. And this season just added a whole slew of new elements to that sweet blender of nostalgia.

First of all, if you’re reading this review and thinking about watching season two without having seen the first season, I’m going to politely ask you to stop now, and cancel all your plans. Watch the first season. I’ll wait.

If you just want an all-too-brief refresher before digging into season two, here goes (but seriously, it’s only eight hours–go rewatch season one! I swear, I’ll wait!):

Season 1 takes place in 1983 in the small town of Hawkins, Indiana, which might as well be Haddonfield, Astoria, or Castle Rock, for it is utterly Everytown, USA. However, something terrible is going on in that innocuous government facility down the road: dark and dastardly experiments related to the MK-Ultra program, delving into psychic powers of kidnapped test subjects, in this case, a young girl named Eleven (Millie Bobby-Brown). At the same time, a boy named Will Byers (Noah Schnapp) disappears in the forest (nicknamed Mirkwood by the wonderfully geeky group of tabletop gamers) while biking home from an epic D&D campaign. It turns out that he’s been taken by the Demagorgon, a creature unleashed from a dark dimension called the Upside Down. What ensues is a mystery worthy of The X-Files and Stand by Me. 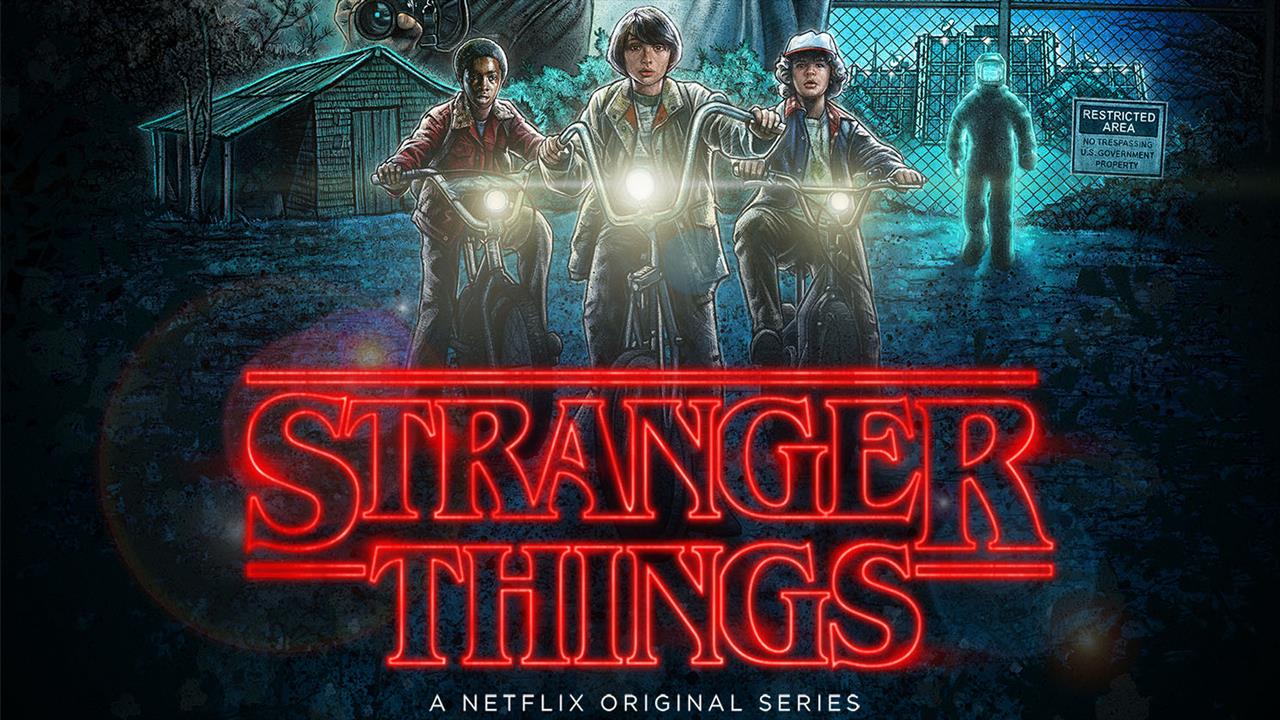 The local sheriff, Jim Hopper (David Harbour) promises Will’s mother Joyce (Winona Ryder) that he’ll get to the bottom of this mystery. Will’s best friends, Mike (Finn Wolfhard), Lucas (Caleb McLaughlin), and Dustin (Gaten Matarazzo), are determined to find out the truth about their fourth party member’s disappearance, and they’re spurred on even more by Eleven’s arrival, with all her crazy awesome Carrie-level psychic powers. To make matters stranger (see what I did there?), Will’s older brother Jonathan (Charlie Heaton), Mike’s older sister Nancy (Natalia Dyer) and her intolerable boyfriend Steve (Joe Keery) all find themselves chasing the same mystery after Nancy loses her best friend to the Demagorgon. Together, they all must search for answers and find that their world shares a bit more with their RPG adventures than they cared to know.

But what about Season 2?

One of the things I appreciate so much about Stranger Things is the attention to all things 80s, especially the movies. I’m not talking just about references and easter eggs, though they abound both overtly and subtly (and before I forget, you need to check out our article on the easter eggs found in this season). This isn’t marketed as the second season of a show, but as a sequel to a film. This is Stranger Things 2, and it’s clear that the Duffer Brothers did their homework on successful sequels.

For all the different plot threads going on in the first season, I still see it as a close story, focused on the search for Will Byers. There’s a single creature stalking each group, and a single conspiracy working to cover it up. Stranger Things 2 expands the story, building upon what came before and opening up the world – both our own and the Upside Down.

If season one is Alien because of the Party being hunted by a single creature, season two is Aliens, in so many ways. A year later, in 1984, our cast of characters has now grown, with Sean Astin (obviously, from The Lord of the Rings, but of course also from The Goonies) and Paul Reiser (reinforcing my Aliens connection) joining the series. Also, a newcomer to Hawkins hopes to join the Party: Maxine “Mad Max” Mayfield (Sadie Sink). With those new characters come new creatures, new conspiracies, and ultimately more questions.

Instead of a single creature coming from a secret lab that’s zealously protected by the military, the unsuspecting town of Hawkins has been overtaken by a rot. This decay has spread tunnel-like roots throughout the town, all stemming from the gateway into the Upside Down in the basement of the secret government lab. Through those rotting tunnels are crawling a new form of Demagorgon (dubbed “Demadogs” by Dustin, who found one hiding in his trash can), and they swarm throughout the government installation, killing everyone in their path. They’re tracked and fought in scenes enormously reminiscent of Aliens, with a motion sensor and calls and responses by members of a team. What’s worse, a gigantic shadowy creature (looking like a smoke-monster version of the Alien Queen) looms above everything, seen only by Will Byers (who, yes, we got back at the end of season one – spoiler alert!) as he discovers terrifying flashes of second sight, able to see the Upside Down. While all this is going on, Eleven leaves Hawkins where she’s been in hiding, isolated from her Party, for the last year, and goes off in search of her past.

Season two sees our boys beginning to grow up. The Party tries to move forward, just as they once did, in the halcyon days before Will’s disappearance, but like those times that the Duffer Brothers are so reverently recreating for us, they’re gone. Ever since his return from the Upside Down, Will hasn’t been the same. He’s having flashbacks, bursts of sight into the Upside Down, seeing this terrifying creature looming over the town, in front of a storm of red lightning. Will has PTSD (diagnosed in the series by Paul Reiser, taking over for Matthew Modine’s evil scientist overlord) from his experience in the Upside Down. However, it’s even worse than all that: a girl (who isn’t Eleven, much to Mike’s dismay) is wheedling her way into the Party, almost tearing Dustin and Lucas apart, and irritating Mike with her non-Elevenness, especially because Max is cool. These are terrifying prospects that the boys in the Party have never truly had to reckon with. Their world will never be the same.

Eleven is gone, having apparently vanished when she destroyed the Demagorgon in season one, but she’s in hiding right under their noses (a little unsettlingly in Sheriff Hopper’s cabin), until it’s time for her to break out of hiding to search for her mother and a pseudo-sister who helps her sort out her powers. It’s really sad to see the Party without Eleven – and the sting of her absence is sharpened by Max’s persistent presence. But that makes her homecoming all the more poignant in the end, with a huge, world-shattering entrance. This departure is important for Eleven, as she made such a huge journey from lab experiment to real girl in season one – her arc is one that just compels the viewer, and which I imagine will continue to do so for seasons to come.

This season takes the time to develop each of the main characters more: Joyce has a boyfriend (Sean Astin’s Bob), Hopper is secretly trying to ingratiate himself with the government conspirators, Nancy and Jonathan are trying to blow the lid off the conspiracy (with the help of the always-hilarious Brett Gelman), Dustin gets a pet and has a crush, Lucas also has a crush but has more success than Dustin, and Will goes crazy because his mind is being torn apart by the Upside Down.

There’s so much more to this densely-packed, mythology-driven season that I can’t even begin to tackle: Sean Astin’s lovable Bob, Winona Ryder’s hair, Eleven’s hair, Kali’s hair, Sadie’s absolutely bat-$#!& insane brother Billy’s hair, what the heck that shadow monster is, and much, much more. I could write another 2,000 words on any of the innumerable layers of this show.

I cannot stress this enough: watch this season as soon as possible.

But is it better than Season One?

Yes. This might be controversial, as sequels are generally derided over their predecessors, but hear me out. In no way does this diminish the phenomenal piece of art that was the first season of Stranger Things. What made the series so great from the start were the characters, the Party. Those young actors are wholly endearing in just about every way; from their humor to their quirks and their overall aesthetic, they’re just genuine and earnest. Moreover, the mystery and the feel of the series is completely compelling, drawing us all in and leading us on their campaign against the evil threatening their town.

I argue that only because of season one’s strengths could season two reach such great heights. The characters we love grow, their relationships stretch and deepen, and the eerie world introduced to us has still grown stranger.

The highest praise that I can give season two is odd, but bear with me. This season made me love Steve. Honestly, the whole subplot between Nancy and Steve in season one was totally fine, but on the whole distracting from the main story until they all came together at the end. But really, there has rarely been a character in television that has grown like this for me. Season one Steve was a total toolbag. Plain and simple. Everything he said made me want to just beat that terrible, glorious hair right off his head. And yet, when Nancy drunkenly breaks up with him, I felt sorry for him. And what’s more, as the season continued, I wanted more of Steve. He and Dustin go on the hunt for the creatures, walking down a railroad track together, and he gives Dustin hairstyle and love advice. He’s there for the Party more than Nancy or Jonathan (the actual siblings of two members of the Party) are, throughout the season. He’s still Steve, still just so 80s, but he’s impossible not to love by the end of this run.

I have small quibbles: It’s just a bit weird that the Sheriff sort of adopts Eleven and is stashing her in his cabin in the woods. It’s completely innocent and he using her to replace his lost daughter, and it’s truly a good relationship they have. But it was a tad unsettling that he was just hiding her. I think that Billy, Max’s twisted psycho brother, was underdeveloped, and was just one step over the top, but he fits into quite a few 80s tropes. And of course, there are a couple of anachronisms, if the internet is to be believed. However, I can easily forgive each of these things in light of the whole.

After all that gushing, I’m sure you’re surprised with my 10 rating. This is an essential piece of our cultural zeitgeist, a touchstone surpassed only by the likes of Game of Thrones or Westworld, but Stranger Things is easily on par with those shows. You do not have to be in love with the 80s to fall in love with Stranger Things, you only need a heart and a soul, and a healthy love of wonder.