The Enterprise arrives at Starbase 11 in desperate need of repairs. They rode through an ion storm, which left the ship damaged and a single crewman, Lt. Ben Finney (Richard Webb) dead. However, due to a discrepancy in the ship’s log and Captain Kirk’s (William Shatner) report, Kirk demands a trial by court-martial to clear his name. 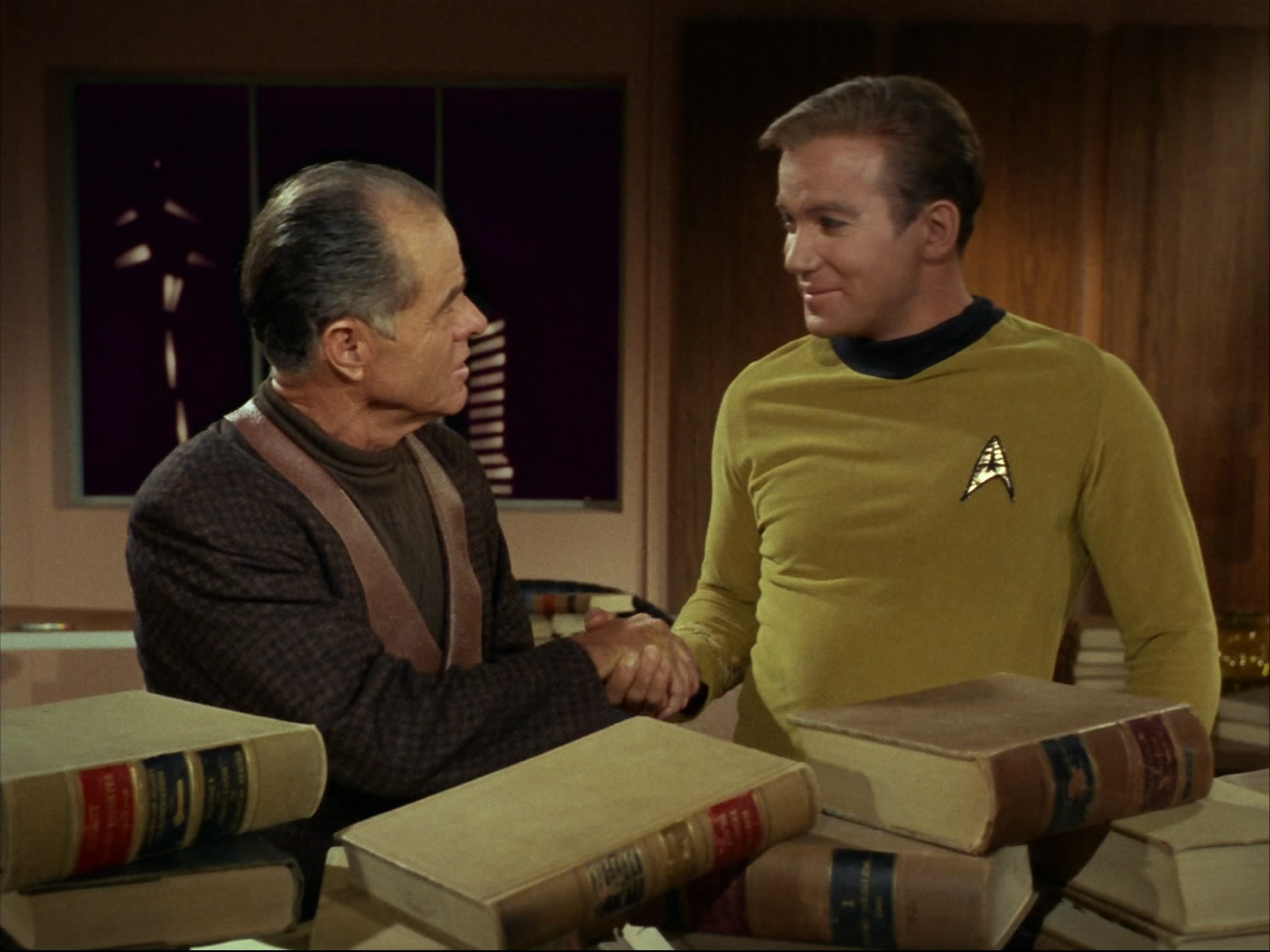 Though it’s not the most amazing episode of Star Trek to ever air, what I love about “Court Martial” is its demonstration that science fiction doesn’t always need to be esoteric or extra-terrestrial-filled. A show like Star Trek that’s nearly an anthology series, with its supremely episodic nature and nearly no serialization (thank you, Deep Space Nine and Discovery for forging your own paths!), is supremely pliable with regards to its format. It can do just about anything: one week it’s a duel to the death with a gigantic green lizard, another week it’s a tale of gods and men (also duelling, with swords!), or a submarine battle among the stars, or time travel, or even a courtroom drama. And each format can be utilized to get across a message, or even to compose a nice character portrait.

This time, that character we explore is Captain James T. Kirk, but we do it not as much through his bravado and his command (though we get those obligatory moments). We get a glimpse as to how difficult command actually must be, the decisions he must make and the ramifications that those choices have. We see Kirk standing up for what he knows is right, defending his innocence (because of course he’s innocent!). Moreover, we see Kirk through the eyes of someone passed over for command, someone who has not had the fortune or the good instincts that Kirk possesses. And that person has faked his own death in order to make his erstwhile friend pay.

It sounds like Court Martial has the makings of a great episode – what’s the catch?

The plot isn’t terribly exciting – Finney is just hiding in engineering and the sensors can’t find him? Come on. Plus, some of the contrivances they (Spock) employ to suss out the truth are just bonkers-bad 1960s science fiction (they use a microphone to not hear things at some point, making a huge show of walking up to each officer to eliminate his heartbeat from the sensors, before Spock reveals he could do the whole process remotely…). It really took me out of the episode, overall. 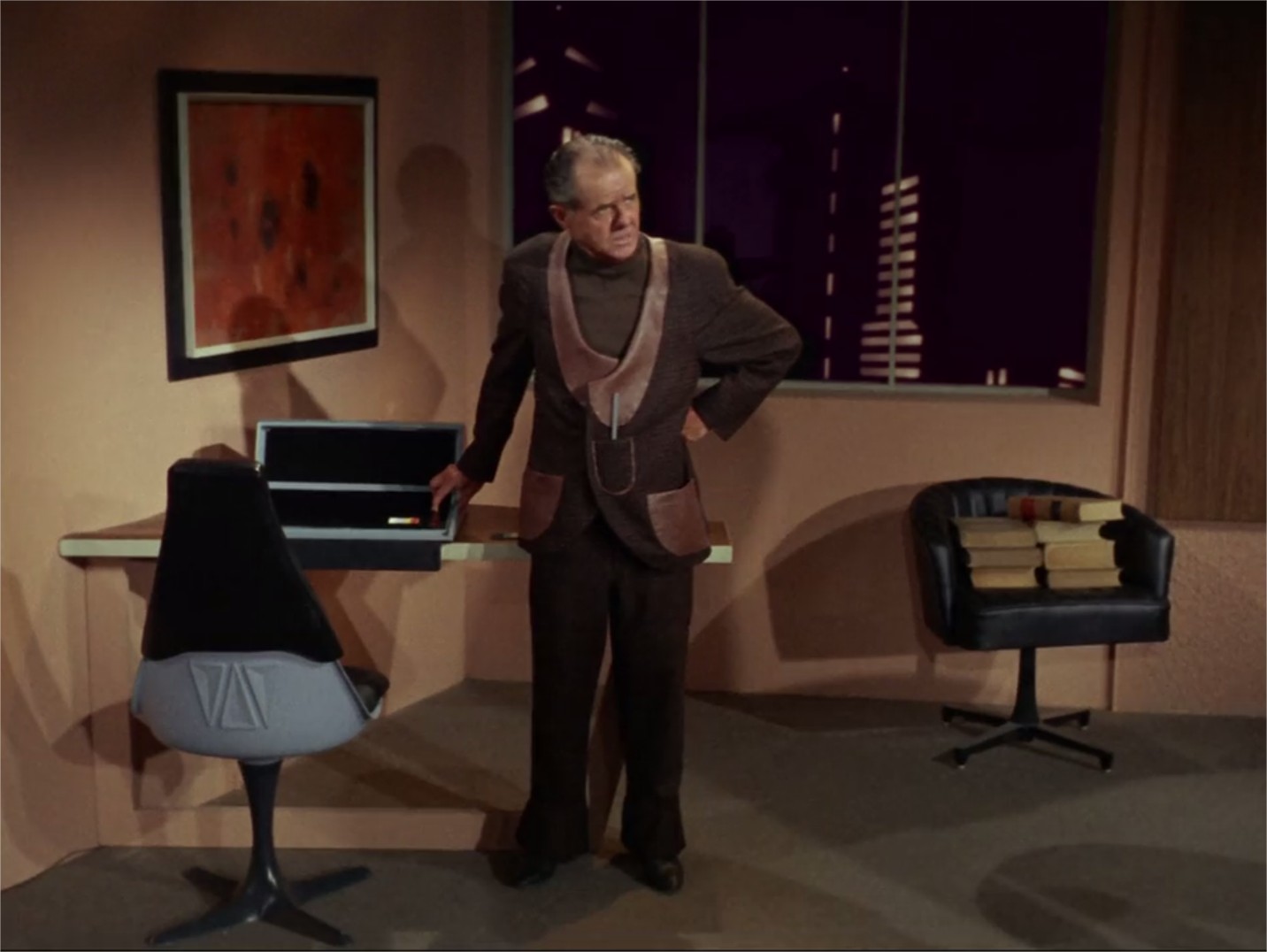 What about the performances?

The saving grace of this episode, in addition to the great character study of Captain Kirk, are the performances. This episode boasts a phenomenal ensemble of guest actors. Elisha Cook as Samuel T. Cogley, the book-obsessed lawyer who takes over Kirk’s case, is both funny and quirky in equal measures, underscored with a gravity that grounds the levity. Joan Marshall as Lt. Areel Shaw, Kirk’s old flame (I should be keeping count of the many women of James Kirk, but it’d depress me), is saddled with a difficult job as Kirk’s prosecutor and paramour lover (does Starfleet HQ know about this? I’m fairly sure that shouldn’t be allowed…). Yet she’s not the hard-nosed villain. She’s genuinely conflicted about her task and takes it up with professional gusto. Speaking of hard-nosed, Portmaster Stone (Percy Rodriguez) isn’t really a villain, but he’s a bit too *ahem* stony for my liking, falling almost into caricature territory. 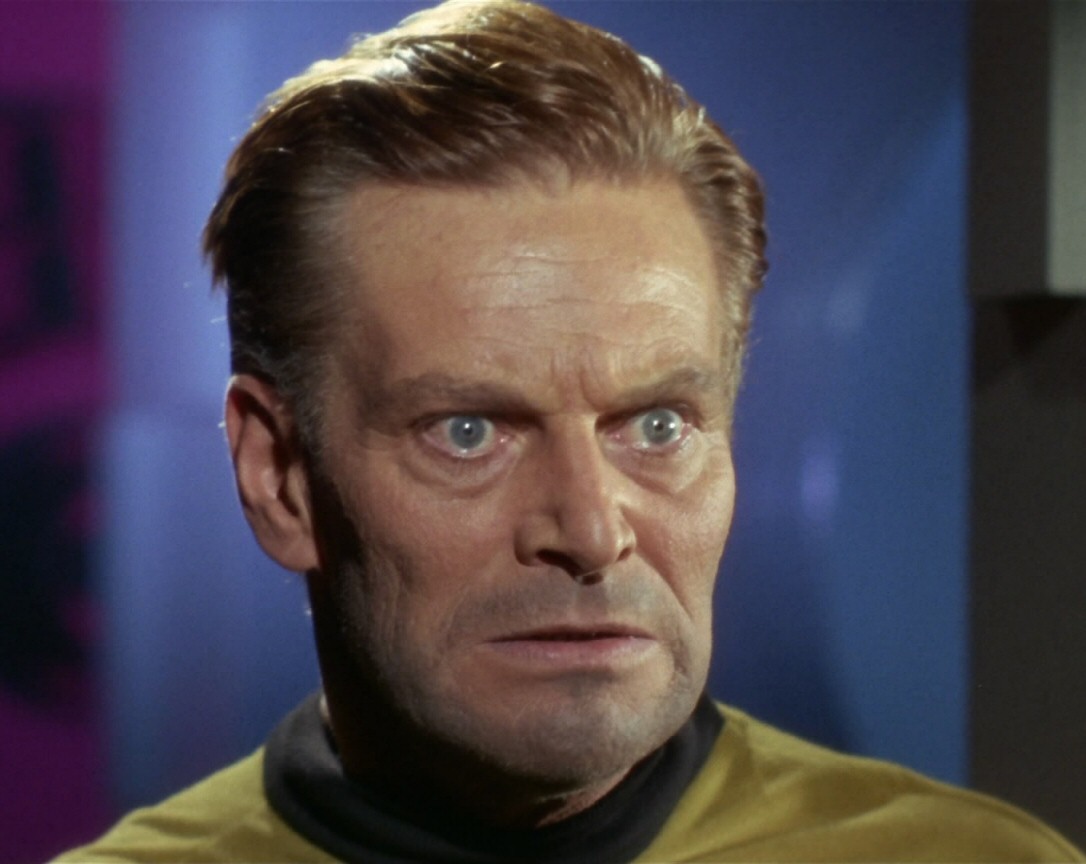 Lastly, Richard Webb as Lt. Finney is just nuts. He’s way off Barney Stinson’s crazy eyes chart (sorry Ted, he’s just not for you!) This is exactly what the episode needs, though. In the midst of all the stoic courtroom shenanigans, there needs to be an explanation for the inexplicable here: why is someone trying to frame Kirk? Because there’s a crazy guy. 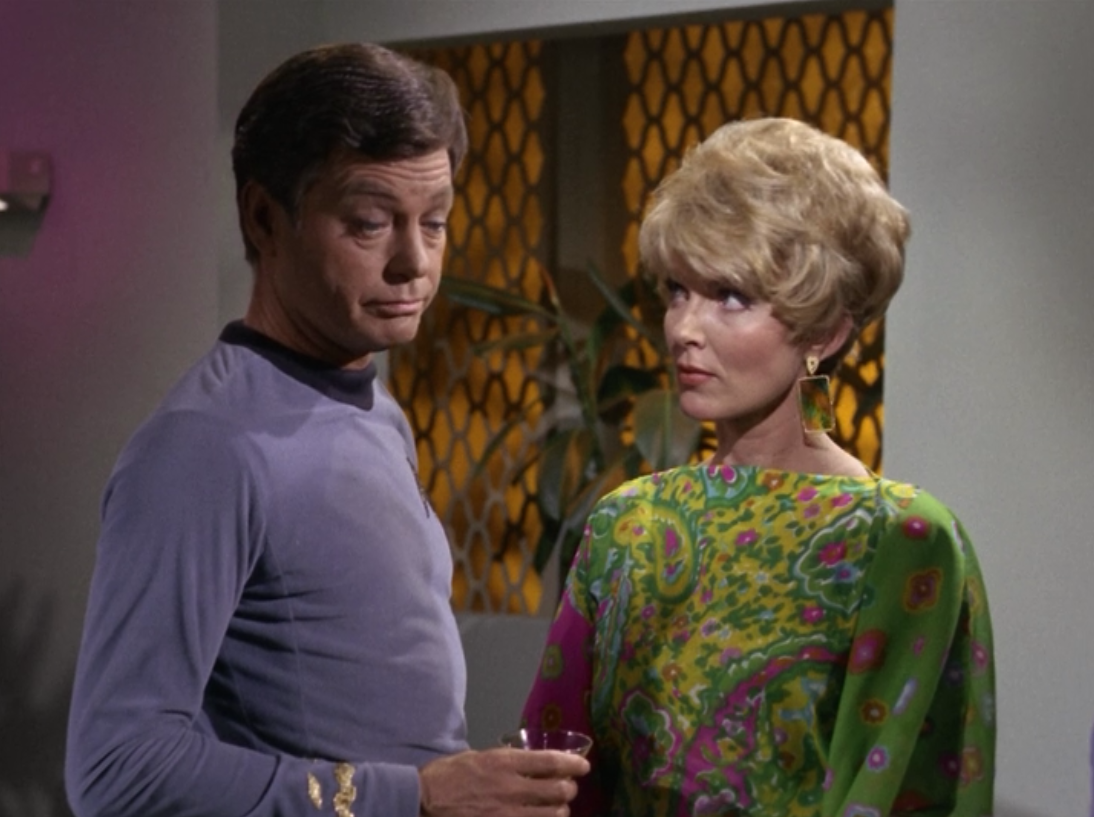 At Starbase 11’s Officer’s Club, McCoy first spots Shaw and uses Kirk’s reputation to try to pick her up, only to discover she knows him, leading to the quote below. 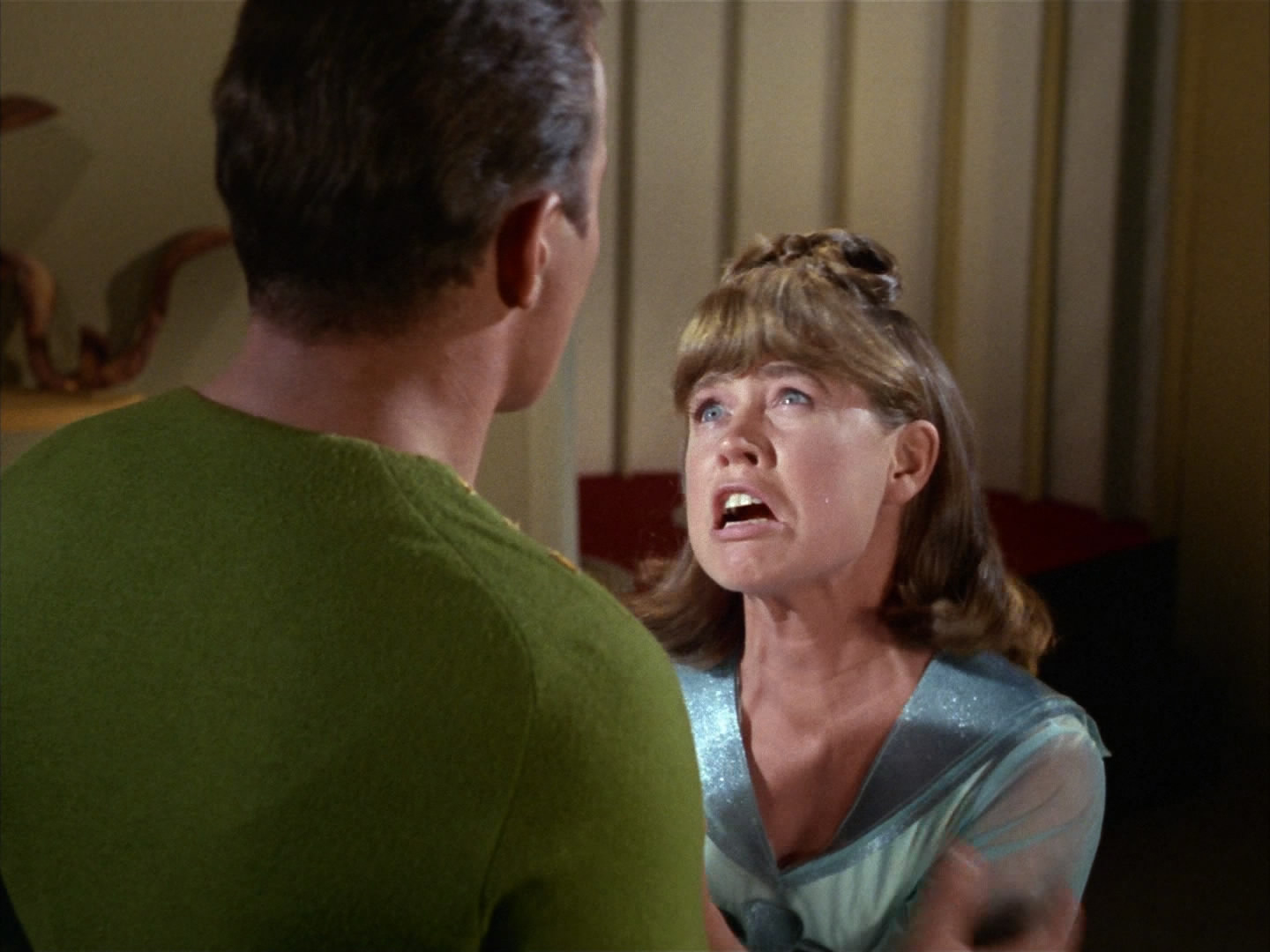 Jamie Finney is named after James T. Kirk – she is not a good actress. 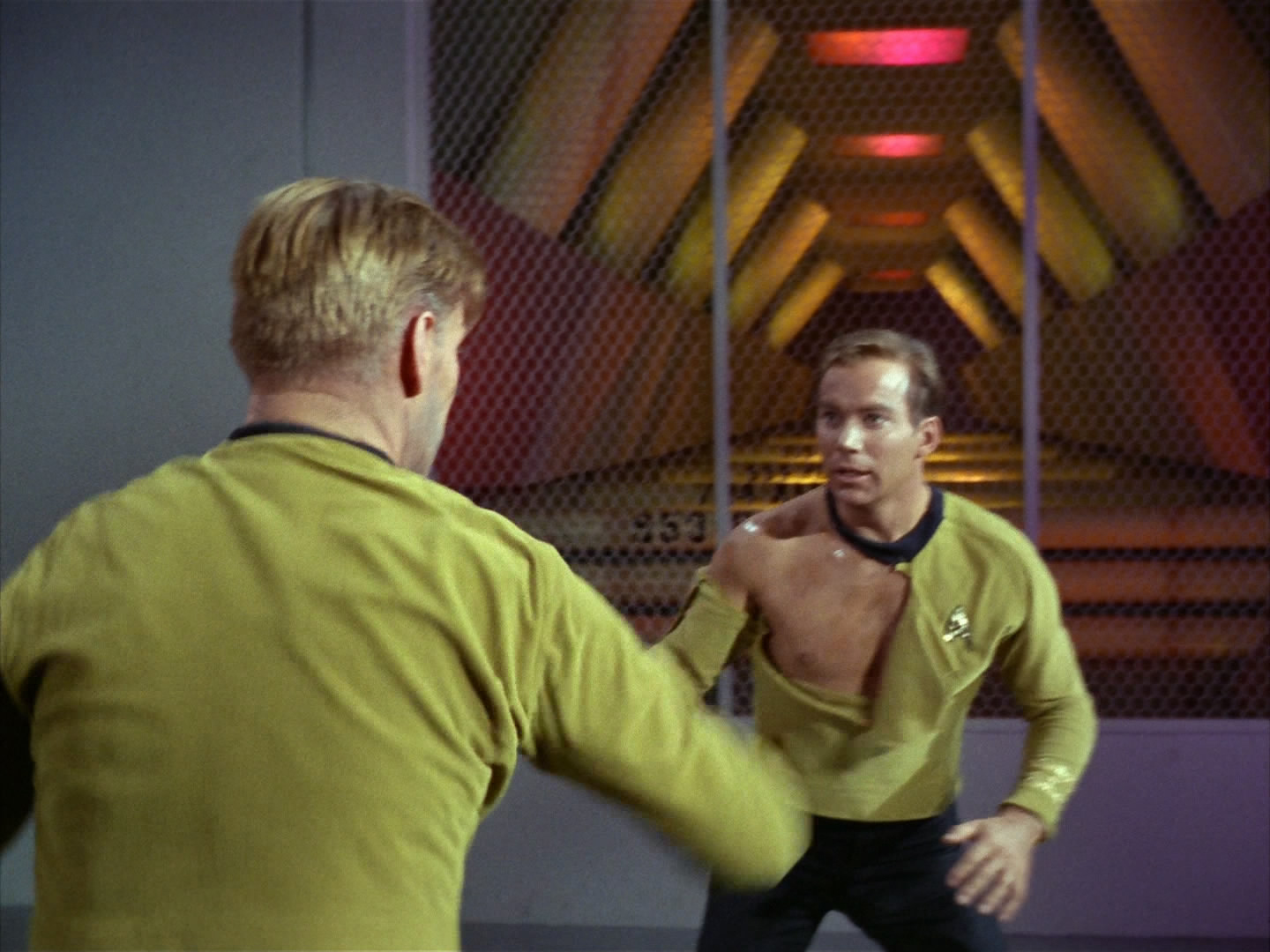 –Bones says this to Shaw. I love that at least the show is somewhat self-aware that Kirk’s past is filled with droves of beautiful women who are all still madly in love with him, just waiting for him to swoop back into their lives.

Kirk: “So that’s the way we do it now – sweep this whole thing under the rug and me along with it! Not on your life. I intend to fight.”
Stone: “Then you draw a general court!”
Kirk: “Draw it? I demand it! And right now, Commodore Stone, right now!”

–Kirk standing up for himself against Stone’s accusations 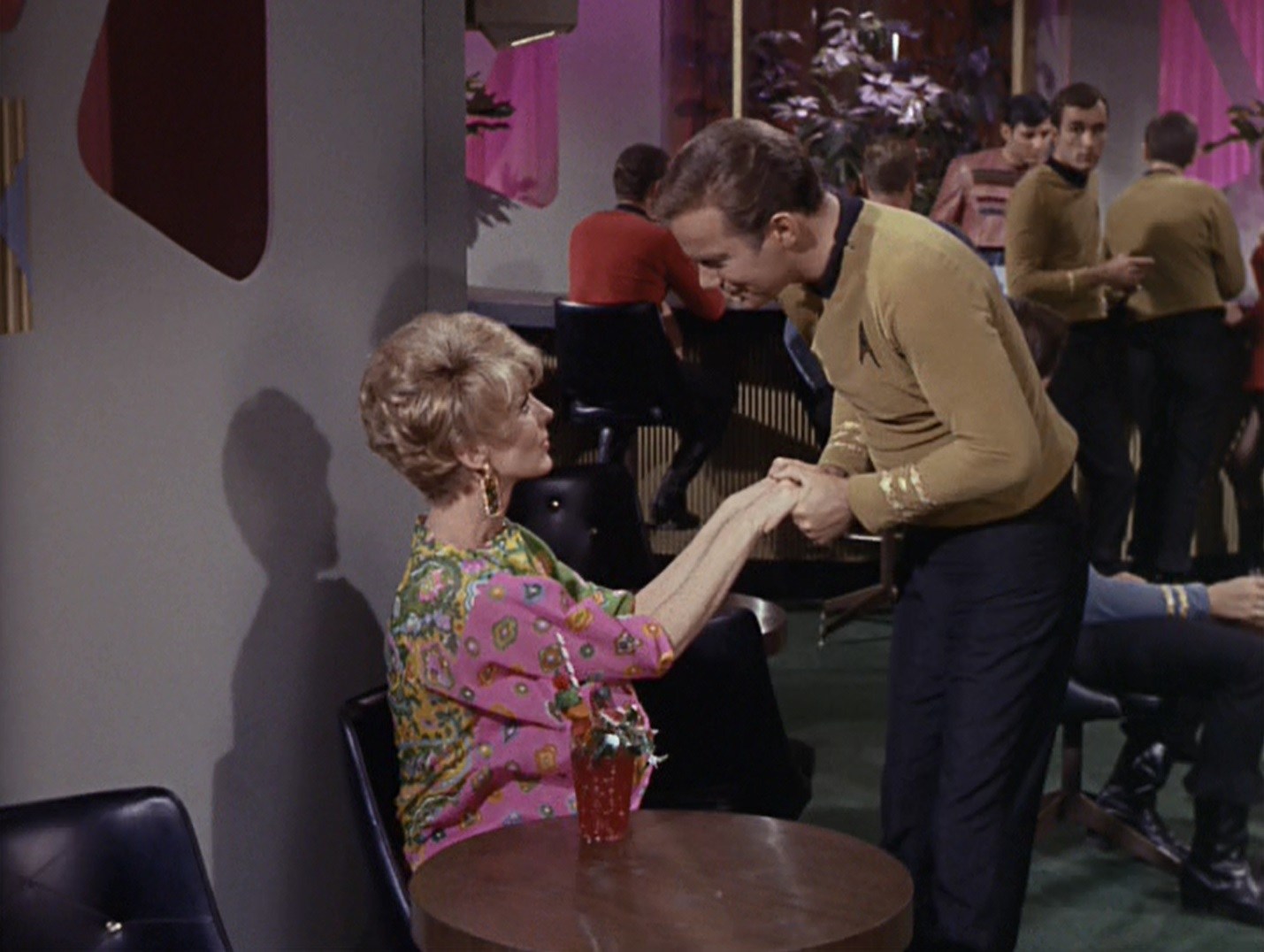 Shaw: “Do you think it would cause a complete breakdown if a lowly lieutenant kissed a starship captain on the bridge of his ship?”

“Court Martial” works on a character and a performance level and not on a plotting or a production level all that well. The courtroom is trying to be fancier than it is, without everything working the way that it should. Plus, the stupid microphone gizmo… However, this episode gives us a glimpse into the pressures of Kirk’s command, and a taste of the loyalty that Kirk’s crew truly feels for him (which will become a theme throughout the remainder of the series and the films).

Next is “Return of the Archons,” an episode which takes crazy to a whole new level, and where Kirk continues his motif of out-logicking a supercomputer. I can’t wait!