Flashback | Recap | Star Trek: The Original Series S1E24: “This Side of Paradise”

Season 1 – This Side of Paradise 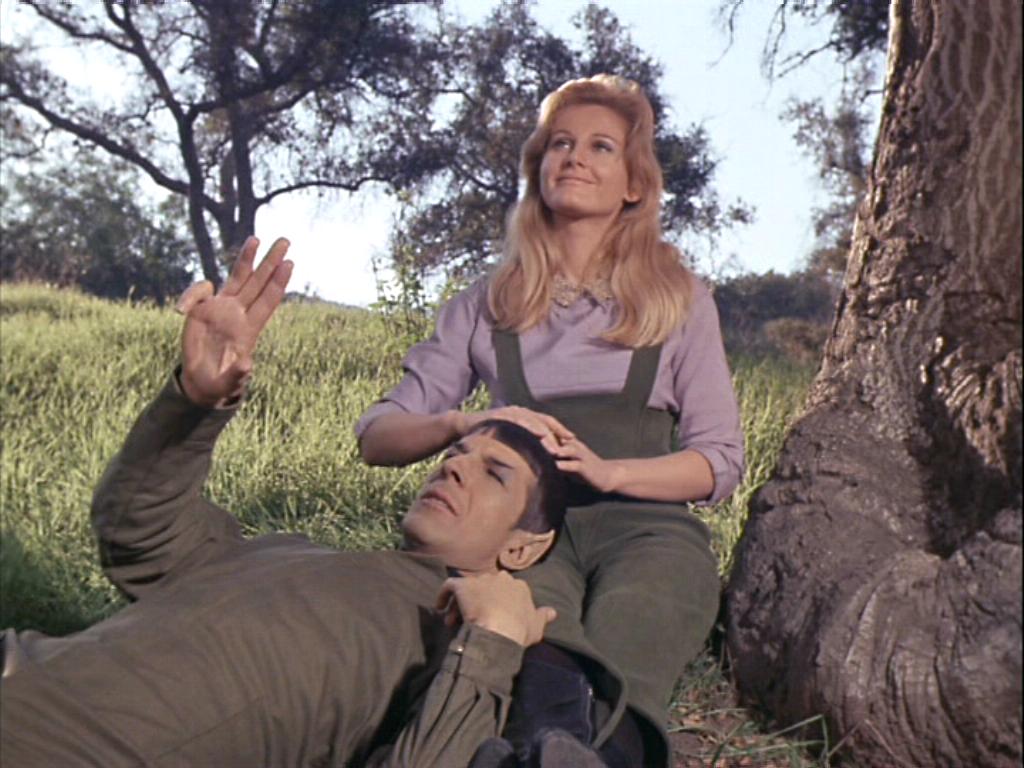 The Enterprise arrives at Omicron Ceti III to understand its destruction. A colony, led by Elias Sandoval (Frank Overton) was sent to that planet three years ago, but a discovery of a deadly radiation that inevitably destroys all living tissue means that the colony could not have survived. However, when they arrive, the earth colony is still alive and well – and very happy. Something is protecting the colonists and made them all blithely euphoric – and the Enterprise can’t have that!

As each of his people succumb to the power of Omicron Ceti III, resigning from Starfleet to live on the surface, Kirk (William Shatner) grows more and more desperate. What’s more, Spock (Leonard Nimoy) himself, upon reuniting with a friend among the colonists, Leila Kalomi (Jill Ireland), somehow loses his logical faculties and decides to live a life on the colony as a farmer. Kirk must figure out what to do before losing his entire ship and his command. 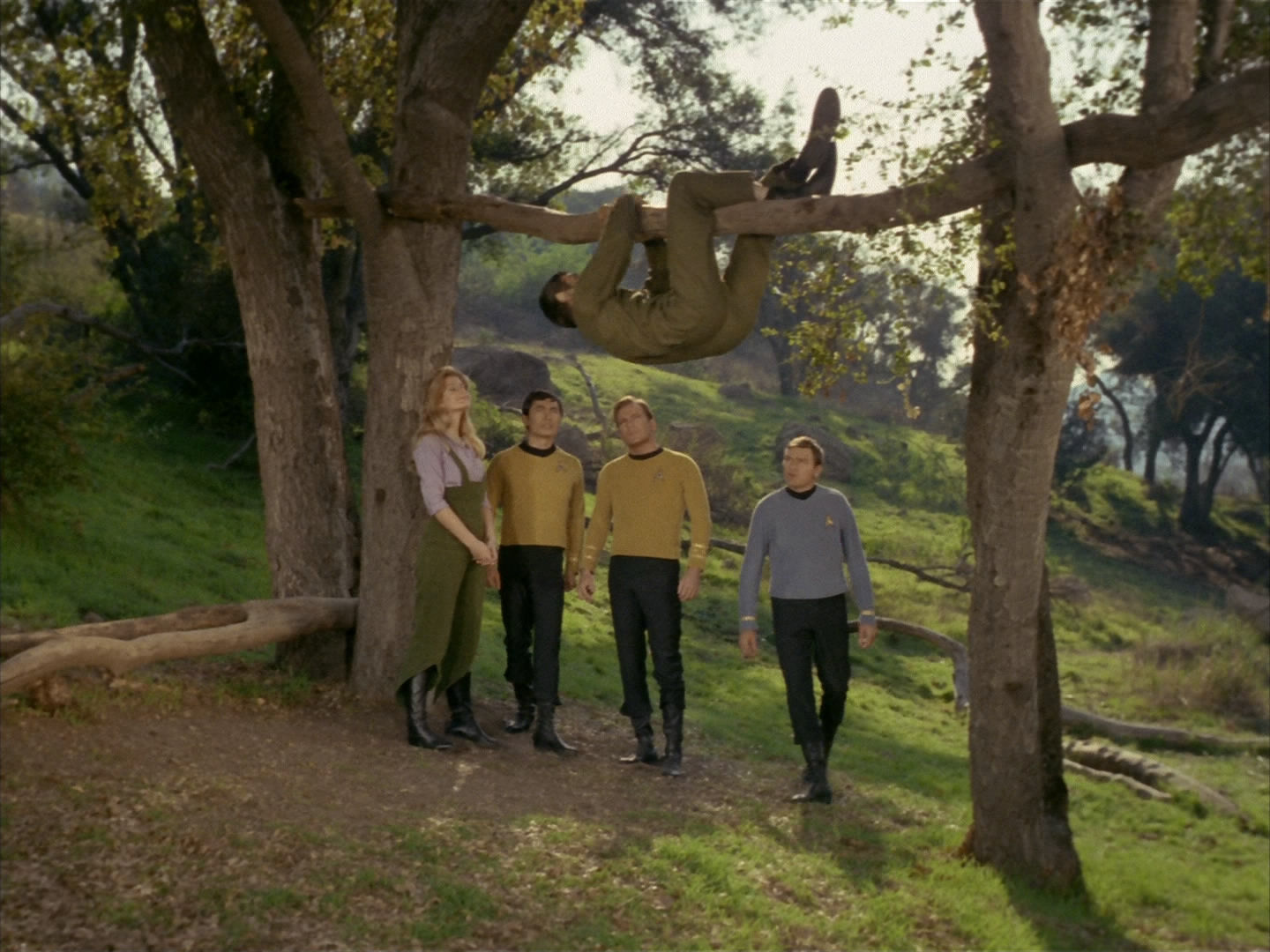 Once again, Star Trek takes an innocuous concept: a hippie space colony (which would be rehashed badly later on…), and uses it to tell a powerful character story. The planet is infested with spores (something that Star Trek Discovery will eventually latch onto, and which I hope they’ll somehow connect back to this episode) that remove all rational inhibitions to blissful living. This doesn’t turn into The Red Hour from “The Return of the Archons,” but it does mean that each person under the spore’s influence is safe from most harm. They’re purely safe, purely happy.

D.C. Fontana, who rewrote this script, focuses here on Spock, the only person on the Enterprise who can never be peaceful and content because he has no emotions – for he is not human. Not fully human, at least. This is the Spock paradox. He’s forever torn between two worlds, two halves of himself, forever separated from both. And this episode tears down his carefully built wall of protection that he’s erected, allowing him to give into happiness and joy, until he gives up everything else that’s important to him.

It doesn’t matter that the rest of the crew essentially mutinies (ahem, apparently Michael Burnham and her adopted brother have started a trend in Starfleet!). It matters that Spock mutinies. What matters that he is ready to throw everything away for a woman he hasn’t seen in years. For Spock cannot be happy; he finds his identity at his Starfleet post, side by side with Captain James T. Kirk.

This makes it all the more tragic when he not only must listen to Kirk break him out of his ecstasy by angering him. Spock must then break up with Leila. He tells her, “I am what I am, Leila. And if there are self-made purgatories, then we all have to live in them. Mine can be no worse than someone else’s.” He then tells Jim, “I have little to say about it, captain. Except that for the first time in my life, I was happy.” From this point on in the episode, Spock is clearly broken and melancholic. I wish that the sixties had allowed us to see this last for a while. Oddly, I feel as though this is where Spock and Kirk truly become best friends, which is strange.

All in all, Nimoy shines here. He plays just about as wide a range as possible, and it is truly a sight to see. The next episode, “The Devil in the Dark,” will also boast a powerful performance from Nimoy, one that will become iconic.

This episode takes its title from a novella by F. Scott Fitzgerald. I’ve not read it, but when I do I’ll let you know. I’m not sure how it ties in.

The music cue that accompanies Kirk and his landing party exploring the colony is one of my favorites. It’s called “Kirk’s Command/Charlie’s Mystery/Charlie’s Gift” by Fred Steiner (from the “Charlie X” score).

Memorable Quotes from This Side of Paradise

McCoy: “Well, that’s the second time man’s been thrown out of Paradise.”
Kirk: “No, no, Bones, this time we walked out on our own. Maybe we weren’t meant for paradise, maybe we were meant to fight our way through, struggle, claw our way up, scratch for every inch of the way. Maybe we can’t stroll to the music of the lute. We must march to the sound of drums.”

After a hippie commune, it’s time to turn our attention to something that will become another staple of Star Trek: horror. Next is “The Devil in the Dark,” another episode universally acclaimed as one of the best that TOS has to offer.