The Last Jedi: The Storms of Crait Review

In The Storms of Crait, a Marvel one-shot set between the events of A New Hope and The Empire Strikes Back, Luke, Han and Leia visit the mineral planet of Crait, as seen in the finale of The Last Jedi.

In The Storms of Crait, a Marvel one-shot set between the events of A New Hope and The Empire Strikes Back, Luke, Han and Leia visit the mineral planet of Crait, as seen in the finale of The Last Jedi.

the last jedi: the storms of crait IS PART OF THE CURRENT STAR WARS CANON. CHECK OUT THE TIMELINE.

I dislike The Last Jedi: The Storms of Crait quite a bit, for various reasons, but chief among them is the cynicism of its existence. Throwing “The Last Jedi” into the one-shot’s title seems like a flagrant attempt to rope readers in on false pretenses. The story – such as there’s a story here – really has nothing to do with the film it’s ostensibly related to, and while it fills in some minor, relatively uninteresting details about the planet Crait, it’s a tale that sets up nothing in that film, and really has no reason to exist that I can identify beyond slotting quite neatly into Disney’s marketing machinery by having the Original Trilogy heroes muck about on a new planet.

The vague setup here sees the Rebel Alliance looking for somewhere to put their new secret base. The one-shot introduces a new character, Trusk Berinato, someone who has previous with the Organa family and on whom Leia decides to gamble when he insists that Crait is hospitable enough for the Rebellion to settle down there. Needless to say, he’s fibbing, having sold the rebels out to not only the Empire, but SCAR Squadron specifically.

I have so many problems with this I don’t even know where to begin. It’s established in the issue that Leia somehow figured all this out or knew about it in advance, which raises two questions. One: How did she know that? And two: Why did she risk bringing the Alliance to Crait – including their supplies, personnel, fuel, and Luke f*****g Skywalker – just to entertain Trusk?

We know the answer, of course – to contrive a reason for Luke, Han, and Leia to be on Crait. All of the narrative quandaries presented in this issue have similarly dull answers. Why SCAR Squad specifically? Because it makes for a good visual. It’s easy to suggest that it’s because Luke has a history with their lightsaber-wielding leader Sergeant Kreel, but are we seriously pretending that SCAR Squadron represent any kind of significant threat? 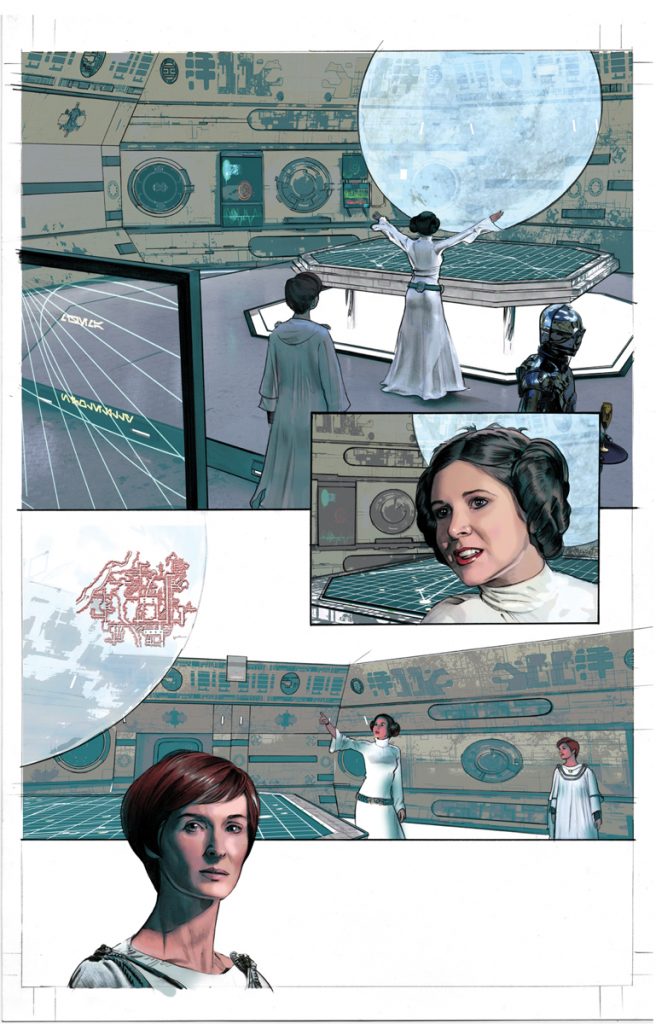 No matter. The Storms of Crait also makes some odd decisions with the heroes. Luke spends most of the issue whining about having to haul around moisture farming equipment, which was in-character for him circa A New Hope, but really isn’t during the period of time between Episode IV and Episode V where this comic – and all the other main series Star Wars comics – takes place. Leia hoping to see the good in people, even nakedly villainous scoundrels like Trusk, seems Leia-like, but there’s nothing in the actual writing of this issue that suggests that was her motive. Han, thankfully, feels relatively on-point; he just doesn’t have much to do.

As for the art – good lord. Mayhew’s style is to draw photorealistic characters but slightly less photorealistic backgrounds, thus creating the extraordinarily bizarre effect of having the close-up faces – startlingly like Mark Hamill, Carrie Fisher, and Harrison Ford, it must be said – look as though they’ve been stuck onto the panel. The Force might not be strong here, but the uncanny valley most certainly is.

It’s not all bad. The issue’s usage of color – the mostly grey and white salt covering juxtaposed with the vivid red mineral base underneath – is striking, and the lightsaber battle once SCAR Squad arrives really pops. But it’s pretty much the same visual effect that we saw in The Last Jedi, only static, and it’s not enough to make up for the issue’s other flaws.

In the simplest terms, The Last Jedi: The Storms of Crait doesn’t feel like a story being told, but a story being sold. It’s lazy and unimportant in the grand scheme of things, which isn’t in itself a bad thing, but here the lack of inspiration feels nakedly in service of courting fans expecting something more. I don’t begrudge Disney their right to peddle the hard work of creative people, but pushing their thoughtless tat on an unsuspecting populace feels, to me at least, uncomfortably like something an Empire might do.