Despite being reasonably well-made and featuring a typically hateable turn from Michael Shannon, Fahrenheit 451 is a toothless social and technological critique that does the source material a grave injustice.

Despite being reasonably well-made and featuring a typically hateable turn from Michael Shannon, Fahrenheit 451 is a toothless social and technological critique that does the source material a grave injustice.

Based on the current political climate, it’s really no surprise that Ray Bradbury’s 1953 novel Fahrenheit 451 seemed ripe for another adaptation. The first was in 1966, by French auteur François Truffaut, which was too long ago to get properly riled up at all the insipid tech trends that litter this new version, which was directed by Ramin Bahrani and aired on HBO this past weekend.

The premise of Fahrenheit 451, and stop me if any of this sounds familiar for whatever reason, is that of a censorious near-future government that has outlawed books and other unapproved art forms; to own one is to be considered a treasonous criminal, and the punishment, to be exacted by a team of “firemen” who start fires rather than put them out, is the burning of all your stuff and occasionally yourself.

See? Timely. In fact, Bradbury’s original novel was rooted in a broad – perhaps unhelpfully so – skewering of political correctness run amok; of identity politics particularly. The firemen stem from racial minorities advocating for the banning of books that dehumanized or insulted them. In a rather tit-for-tat way, non-marginalised people began to adopt the label for themselves, thus banning books that ridiculed them, and so on and so forth until everything was deemed offensive and deserving of fiery censorship. It’s not an altogether unlikely future, and one that is often overlooked as a component of Fahrenheit 451 because Bradbury’s takedown of mass media, cultural conformity and anti-intellectualism was so much more obvious.

Bahrani’s version of the book might not be a particularly faithful adaptation, which some will inevitably find blasphemous, but it contains that thought-policing germ, which in 2018 feels less like a high-concept dystopian idea and more like a state of the nation address. Thus, the story feels sapped of its allegorical might, at least on the matters of curtailed artistic freedoms, but luckily it has a made-up social network to poke fun at instead.

The Nine, it’s called, a state-run hybrid of Twitter and Fox News projected onto skyscrapers, where cascading emojis and bite-sized texts serve as real-time commentary on whatever is being displayed. The Nine has made gleeful e-celebs of the firemen, particularly Captain Beatty (Michael Shannon) and his “Master Trooper” Guy Montag (Michael B. Jordan); the book-hating populace tune in to see livestreams of raids, showering Montag and his ilk with approval as they burn the books and homes of “eels” who stash the doomed contraband.

Montag becomes disillusioned when a woman elects to immolate herself with her books, including John Steinbeck’s The Grapes of Wrath, which doesn’t strike me as worth dying for either. He nabs a volume in the hopes of understanding what is so compelling about a book that a person might die for it, and in his quest for knowledge he allies himself with Clarisse (Sofia Boutella), one of Captain Beatty’s snitches, but also a member of an underground preservation club who commit entire texts to memory. No mention is made of the poor soul who drew the Dan Brown straw, but the tribulations of these ruffians do come to include an extraordinarily bizarre ornithological subplot that for the purposes of this review isn’t worth mentioning further. 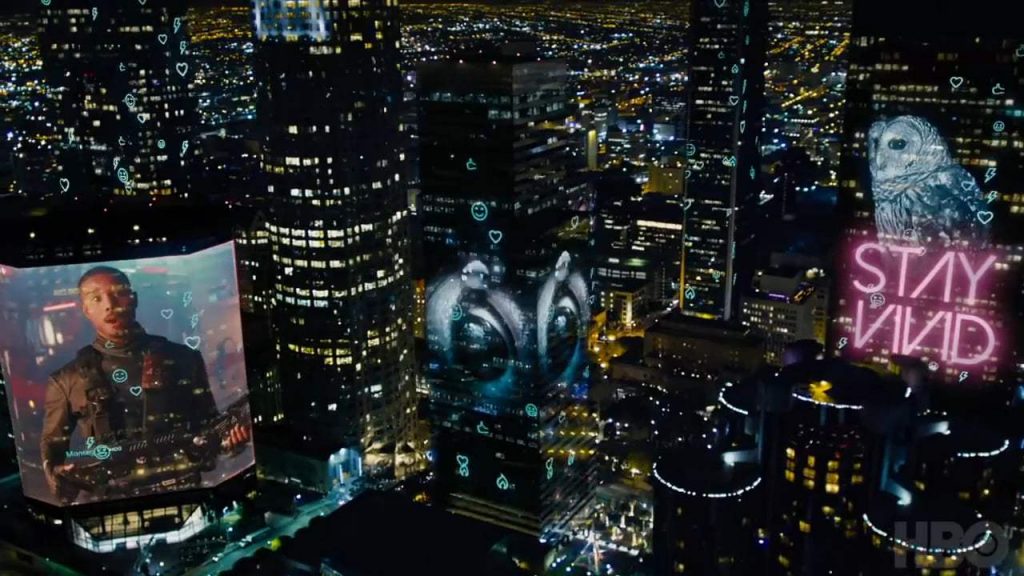 For all its feints in the general direction of real critique, Fahrenheit 451 isn’t as contemplative as it likes to think. Actual exploration of the pointed genesis of the idea is left entirely alone besides one scene, in which Beatty deploys an explanatory N-word, and one can only assume it wasn’t addressed in more detail for fear of causing offense; which is hilarious, when you think about it. In place of a proper examination is a conga line of technological truisms – emojis are a terrible assault on language (an investigation I conducted myself), virtual reality leads to terrible isolation, social media is horrible, and Alexa is probably an evil drug-dealing snitch. I won’t argue.

The actors do their best to sell it. Shannon is pretty much impeccable as the villain, but then again he’s Michael Shannon, so it’d be weird if he wasn’t. Michael B. Jordan gets top billing but not much of a character; his Montag, married in previous versions of the story, is a bachelor, who lives alone in a well-appointed futuristic apartment with his frankly nosey AI assistant. You never really get a sense of why he cares beyond the script having told him to, and his arc feels rushed. Sofia Boutella is believable enough as the kind of woman he might risk his entire life just to cuddle up to, but someone evidently still needs to find her a decent agent.

What’s aggravating about all this is how galling it is to so thoroughly defang a biting social and technological critique. Fahrenheit 451’s commentary is jumbled and thoughtless; a distracting slurry of technophobic commonplaces without any real inkling of a point behind it all. To reduce a novel to such a thing, slop for the open-mouthed masses, is sacrilege in itself. They might as well have burned it.