Based on eye-witness accounts (and of course a degree of speculation), Veronica is the story of what went wrong for a lonely teenager after she tried to contact her deceased father via a Ouija board.

Based on eye-witness accounts (and of course a degree of speculation), Veronica is the story of what went wrong for a lonely teenager after she tried to contact her deceased father via a Ouija board.

OK, I’ll get this bit about the marketing hype out of the way first: when Netflix first announced they had this new Spanish horror film on the way, they said early viewers declared Veronica to be the scariest film ever. Now I’m not generally the sort to argue about what is horror, or what is scary. Those things are in the eye of the beholder, and as long as someone can explain to me why they see it that way, I’ll accept it. But recently, I looked at where Netflix marketing got that little soundbite from, and it seems to me those viewers were either not terribly familiar with horror films or easily scared. 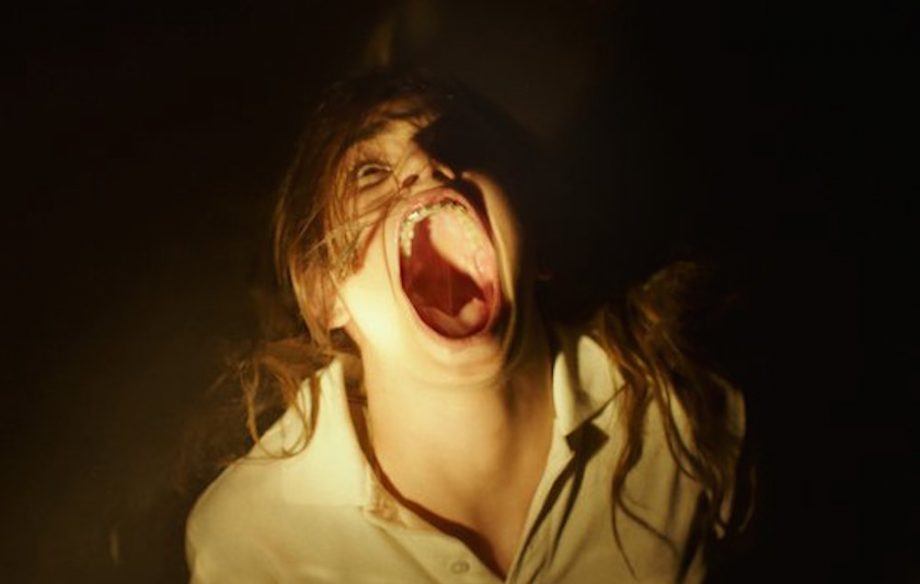 In my experience, if I rummage amongst films that slip in unannounced, that’s generally where I’ll find the Netflix gems. So this “scariest film ever” thing put me off for a while; deliberately resisting the hype because I didn’t believe it. But now, I wish I hadn’t; and if I’d read past the over-the-top headlines to the rest of the press releases and saw it was made by Paco Plaza, I definitely would have watched it sooner: I have immense admiration for his [REC] films (well, maybe except for the third one).

But onto the film itself. Veronica opens with an emergency call and Detective Jose Ramon Romero (Chema Adeva) responding to it. “He’s inside, he’s inside!” As soon as the detective opens the door, the film cuts to three days earlier. The rest of the film is based on the police report (well, a fictionalized version), and especially what happened since it all kicked off just three days earlier. The format works well – main story bookended between the detective arriving (at the start) and then being presented with what he saw (at the end) – but I’m not so sure it fits with the “inspired by the police report” premise: a police report would have included background from longer ago than just a few days. But it was a good film, nonetheless. 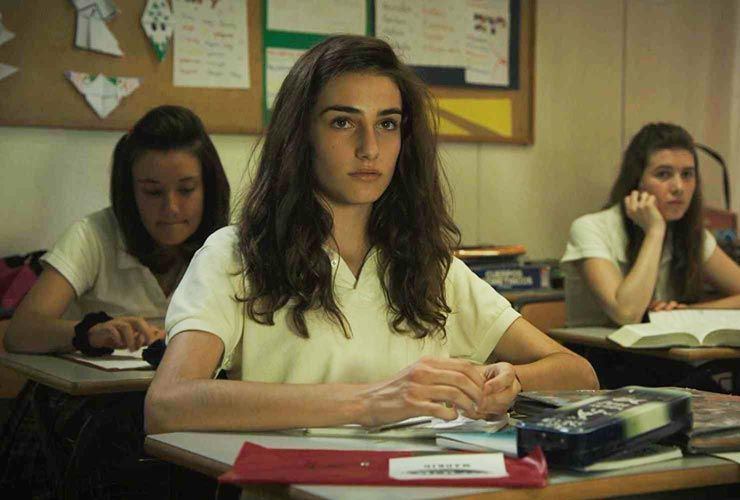 Veronica (Sandra Escacena) herself was a very well-drawn character: she diligently cares for three small siblings, as their mother works extra long hours since their father died; this was apparently not long ago, but we’re never given any background. Veronica struggles to keep up with her friends, and the domestic burden and social isolation both visibly weigh her down: the acting and writing in the context of the main character especially are spot on. This was Escacena’s first major role, especially impressive as the film follows her for virtually the full duration: definitely a name to watch out for. And lest I forget them, the young actors who play her siblings (Claudia Placer, Bruna González, and Iván Chavero) are outstanding too, for the most part in their first film roles.

Veronica and two friends sneak off with a Ouija board, while most of the school is occupied with observing a solar eclipse. Veronica wants to reach out to her father; Rosa – her best friend – is ostensibly there to support Veronica, but tellingly brings a new friend with her, a sign that Veronica was already drifting away before the story starts. The third girl, Diana, wishes to contact a boyfriend who died in a motorbike accident; this was the motivation behind the real subject conducting a seance (I don’t know why Plaza changed it, but can only presume he felt that backstory fitted with the sympathetic character he wanted to present). Now you know what the Ouija board implies. Things aren’t going to go well for at least one of the three girls involved, and as the film’s tagline says, someone answered their call: Veronica herself was firmly struck by something during the seance, and she passed out.

Naturally, I’m not going to tell you everything that happens in Veronica, but the next part of the story does continue to follow a familiar model of seance stories, in that whatever Veronica made contact with does not want to leave her alone; though to be fair, a good deal of what transpires would fit just as neatly in Poltergeist or similar haunted house titles. At first, things merely seem to move, and there are strange shadows, but the freakshow steadily gets worse, with the children being physically threatened and perceptions messed with. Some commentators have dismissed the film because of what they considered tropes or cliches; but in this film, I have no problem with those. Plaza took the real 1992 case of Estefania Gutierrez Lazaro, who mysteriously died after using an Ouija board, and filled in the gaps with his own “vision”.

The elements he added did indeed fit, because (excuse me) supernatural cliches belong in a story about a seance. Veronica is a conservatively raised Catholic teenager (and I don’t think they are unusual in Spain), so it’s not surprising that she believes she can talk to her deceased father, not surprising she easily accepts demonic goings-on in her home, and not surprising there is a sympathetic (albeit somewhat creepy) nun she can confide in (played rather effectively by Consuelo Trujillo). What may appear to be film cliches in Veronica are – in my view – part of the recipe, if made right. And Paco Plaza both wrote and directed this film very well indeed. 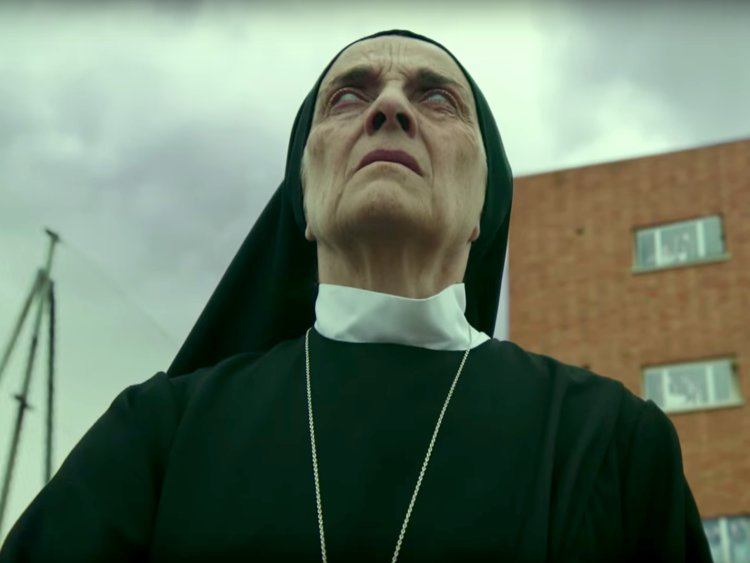 The production is of the same sharp, believable quality as [REC], though there is much less explicit violence and a wider range of settings (including plenty of daylight). The cinematographer Pablo Rosso also filmed [REC] and Sleep Tight; so again, the quality pedigree is worth taking seriously, even if the Netflix marketing puts you off, as it did me at first.

And that mention of Sleep Tight reminds me: just like in that earlier film, Veronica follows one character. We see what she sees, and although she isn’t a narrator as such, her reliability is kind of questionable, because of her frame of mind. Veronica is exhausted, lonely and grieving; and clearly susceptible. But to what? Spirits, her imagination, or emotional fragility? 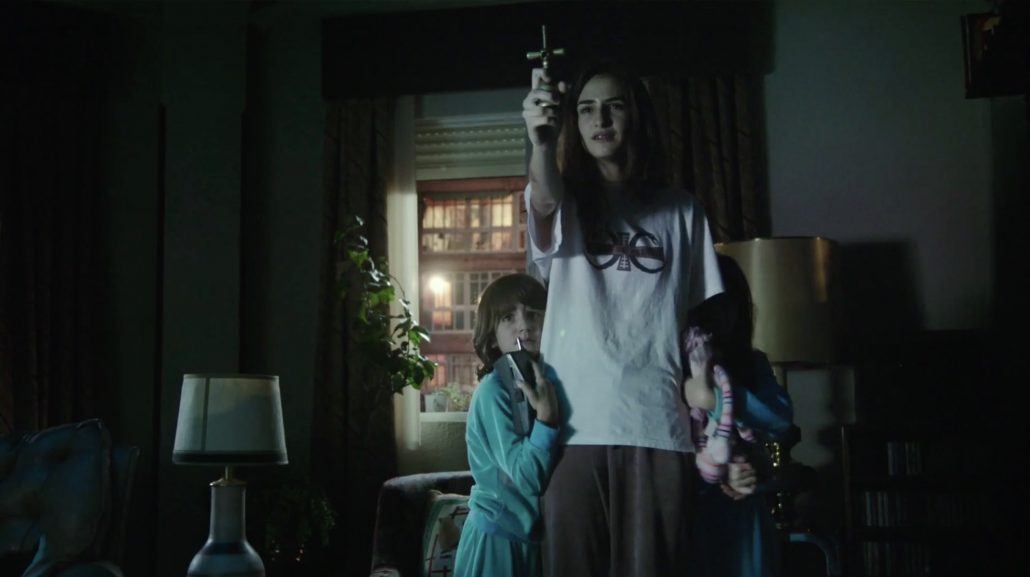 You might or might not find Veronica scary, but it’s a high quality modern Spanish horror film and well worth a watch. I dare you not to get sucked in, and suspend your disbelief… as the detective did when he entered the family’s home.