Bulletproof episode 6 closes out the show’s debut season with a bang, delivering some solid action and character moments, but is slightly undermined by a cliched villain and a hasty ending.

Bulletproof episode 6 closes out the show’s debut season with a bang, delivering some solid action and character moments, but is slightly undermined by a cliched villain and a hasty ending.

This review contains spoilers for the season finale of Bulletproof.

You’ll have to excuse the absence of regular Bulletproof reviews here. Thanks to each episode having aired on a different day for no adequately explained reason, and myself being the only member of the team who is remotely interested in inner-city English buddy-cop series’, it has been difficult to fit the show into the schedule. Bulletproof Episode 6 finds the show and its characters in a very different place than they were when we left them back in the third episode. I hope you’ve been keeping up.

Anyway, following the shooting of Pike’s father, the old man, now revealed as having been corrupt in his younger years and possibly still a villain now, is being fed through a tube in intensive care. The gunman who attempted to kill him, Ray (Vinzenz Kiefer), is in custody; the same triggerman with the skin condition who we speculated in earlier reviews might be a reincarnated Michael Jackson.

It must be said, he’s no less ridiculous than the King of Pop. With a wonky accent and lines right out of the sinister villain playbook, he’s laying it on especially thick – a disappointment after the understated menace delivered by the show’s previous short-term villain, Bakur (Nasser Memarzia).

Bulletproof Episode 6 suffers a little for this guy’s presence. He has a decent mean mug, but he’s given a lot of script-level advantages and tasked with a fair helping of clichéd bad guy stuff, such as when he convinces a fellow inmate to loan him his phone with the help of a razor blade, and then doesn’t even bother to wipe the blood from his hands before making a call. How he even knew the guy had a phone is anyone’s guess. He’d only been in prison five minutes. No idea where the blade came from either. 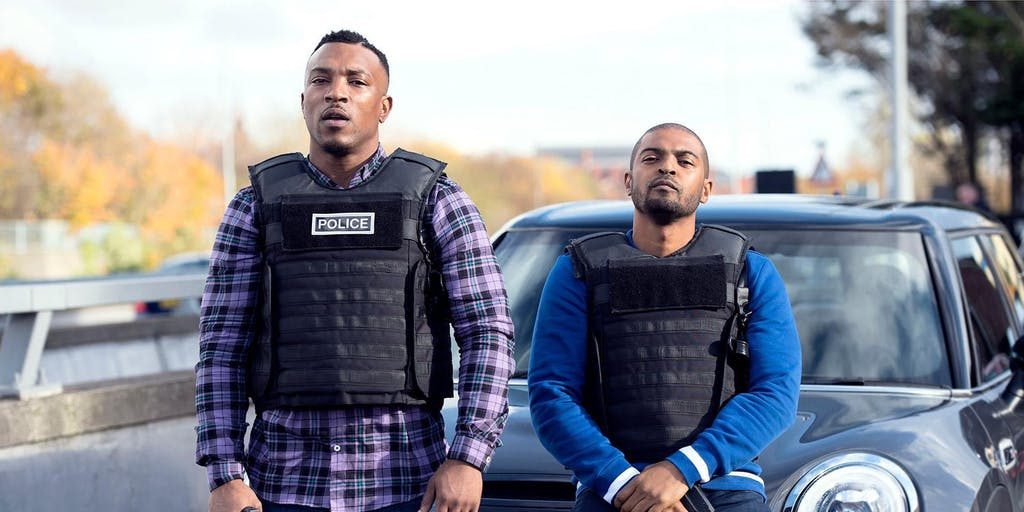 Bishop and Pike’s only lead is Borlock, the retired copper who supplied the incriminating photograph of Pike Senior last week; they return to him for more information, and he reveals an old undercover operation called Black Heart, of which the now executed Sharp was also a member. Taking the information to Tanner, they visit another retiree, who dishes some more dirt. Turns out Pike’s papa wasn’t on the take, but the rest of the unit was. And being a black cop back then wasn’t easy. He had to turn a blind eye to a lot of sordid business. The corruption ran, apparently, “all the way to the top”.

So high, in fact, that it includes Deputy Mayor Charlotte Carmel (Caroline Goodall), a confidante of the Pike family, including, in particular, Arjana (Lashana Lynch). After a prison break which, if you don’t think about it too hard, made for a relatively tense chase sequence and shootout, Bishop and Pike pursue Ray to City Hall, where they engage in one of the season’s finer action sequences, which manages to incorporate Arjana as a convenient hostage and Nel as an unfortunate casualty.

It’s a shame, both that Bulletproof’s first season came to an end with this episode, and that it did so just as the relationship between Nel and Bishop was starting to properly develop. I wish there’d have been more time for that dynamic to be fleshed out, or at least to see Bishop react over a decent length of time rather than just a couple of scenes. He manages to engineer a scenario in which he can coldly execute Ray, but after that he’s wistfully listening to a voicemail message from Nel, and then he’s doing cheer-up donuts in Pike’s Jaguar. The main storyline was brought to a conclusion, but there were a number of minor, character-driven B-plots I’d have liked to see more of.

There might be a chance to find out, say, how Pike’s career continues to affect his home life (Arjana and the kids were notably distressed when they were put into witness protection, for instance), or whether Bishop found a flat. There might be a second season. I sincerely hope so, as I have enjoyed Bulletproof very much, and wish I was able to cover each episode. The finale was an enjoyable conclusion – I just hope it’s a temporary one.