Kiss Me First is a new Netflix series that follows Leila (Tallulah Haddon), a lonely girl trying to cope with the death of her mother. She finds solace in Azana, a virtual world, as Shadowfax (yes, she’s taken the name of Gandalf’s horse). It’s in this digital paradise that she finds ‘Red Pill’, a group of equally disenfranchised loners lead by the enigmatic Adrian (Matthew Beard). However, things aren’t entirely what they seem (when are they?) and Leila becomes involved in a deadly mystery.

Kiss Me First is a new Netflix series that follows Leila (Tallulah Haddon), a lonely girl trying to cope with the death of her mother. She finds solace in Azana, a virtual world, as Shadowfax (yes, she’s taken the name of Gandalf’s horse). It’s in this digital paradise that she finds ‘Red Pill’, a group of equally disenfranchised loners lead by the enigmatic Adrian (Matthew Beard). However, things aren’t entirely what they seem (when are they?) and Leila becomes involved in a deadly mystery.


Kiss Me First is based on a book of the same name by Lottie Moggach, and even though it was first published in 2013, the story feels incredibly prescient. The series plays with some interesting and frighteningly relevant themes around privacy, identity, loneliness and the implications of living our lives online. It’s a series that feels like it was written with me in mind and for the most part, it really delivers on the early promise.

Leila/Shadowfax is superbly played by Tallulah Haddon, providing a really subtle but incredibly effective heart to the story. When we first meet her she’s just dealing with the direct aftermath of her mother’s death, as a nurse feigns while trying to pack up all of the medical kit, like a wheelchair and a commode, as quickly as possible. It’s no surprise then that Leila can only find comfort inside Azana, a VR game that allows users to live out their fantasies. I think one of the successes of the show is that it manages to make Azana look like an inviting place to be; the CGI is admirable for a show of this size.

Of course, life isn’t that simple and Leila can’t just retreat into the game to grieve in her own way. Instead, she meets Tess/Mania (Simona Brown) and the rest of her friends. The group, calling themselves “Red Pill” (in honour of The Matrix – a fact that made me feel so very old), are a collection of players who don’t want to fight monsters, or race cars. Instead, they come together to talk and live out some of their fantasies while using a Sense Band – an illegal device that lets you actually feel the pleasure and the pain from the game.

Kiss Me First lurches from being a tale of technology to something more akin to a cyber-thriller as we largely leave behind the virtual world. I really liked what the series was trying to do and I think it managed to feel fairly futuristic while also being alarmingly familiar. While some of the technology might be a little way off, the benefits and risks of sharing too much of ourselves online are all too apparent. A part of me actually found some aspects of the show to be a little sensationalist; there are of course dangers associated with the internet, but there (generally) isn’t a murderer lurking around every URL. 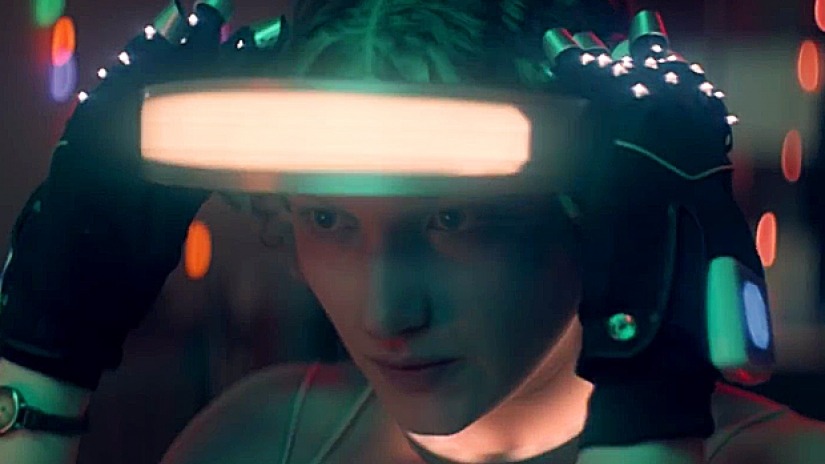 I found the show to be a compelling watch as I blasted through all six episodes in a single sitting. There were some aspects that lost me a little bit, particularly towards the end when certain resolutions seemed to appear out of nowhere. Kiss Me First is a really fascinating mixture of ideas. There were times when it seemed very trope-y and predictable and then in the next minute it completely swerved where I thought it was definitely heading.

The closest comparison that springs to mind is Ready Player One in that both focus on a VR world that is more than it first appears. That being said, Kiss Me First is much more interesting; it actually raises some meaningful questions rather than just being a remember-fest showing you one pop-culture reference after the next. In some ways, it isn’t too far removed from an extended episode of Black Mirror as it warns us about the dangers of technology. Although, Kiss Me First felt more optimistic to me. While there are some rather unsettling outcomes of the technology I also took some solace that there was this virtual world where someone alone and isolated could actually make a connection. I liked the balance between showing us the very best and the very worst that technology can offer.

I really hope that we get another season (or two, or three) of Kiss Me First. There are definitely some hanging threads of the main story left dangling and I think there’s a lot more to explore. It’s a thought provoking series that raises some startlingly relevant questions and has great performances from pretty much everyone.