Home » Film » Godzilla: City on the Edge of Battle Review

Godzilla: City on the Edge of Battle Review

Second in the new anime Godzilla trilogy, Godzilla: City on the Edge of Battle is based on an attempt to reclaim Earth from a monster bigger than any seen before. A lot of strategizing and philosophising… but it does get very exciting!

Second in the new anime Godzilla trilogy, Godzilla: City on the Edge of Battle is based on an attempt to reclaim Earth from a monster bigger than any seen before. A lot of strategizing and philosophising… but it does get very exciting!

Netflix’s Godzilla: City on the Edge of Battle is the sequel to last year’s Godzilla: Planet of the Monsters. That film was about an alliance of humans, Exif and the Bilusaludo trying to defeat Godzilla on a future Earth which hadn’t been inhabited (at least by humans) for about 20,000 years. If you haven’t seen that one, go watch it first, it’s on Netflix. I’ll assume you have, as it is crucial to understanding this film, and there may be Planet of the Monsters spoilers in the rest of this review. Starting now.

Towards the end of the first film, Godzilla was (yay) destroyed; but wouldn’t you know it, that wasn’t a real positive ending. A bigger Godzilla rose up (named “Godzilla Earth” in some articles, because of its size) and defeated that attempt. And following the credits, the hero Haruo was rescued by what appeared to be an indigenous human. Godzilla: City on the Edge of Battle follows on directly from this two-part conclusion, with new strategy required to defeat the bigger Godzilla, and new relationships forming too. And so it felt to me like I was right to expect the Empire Strikes Back quality from this middle-of-the-trilogy film. 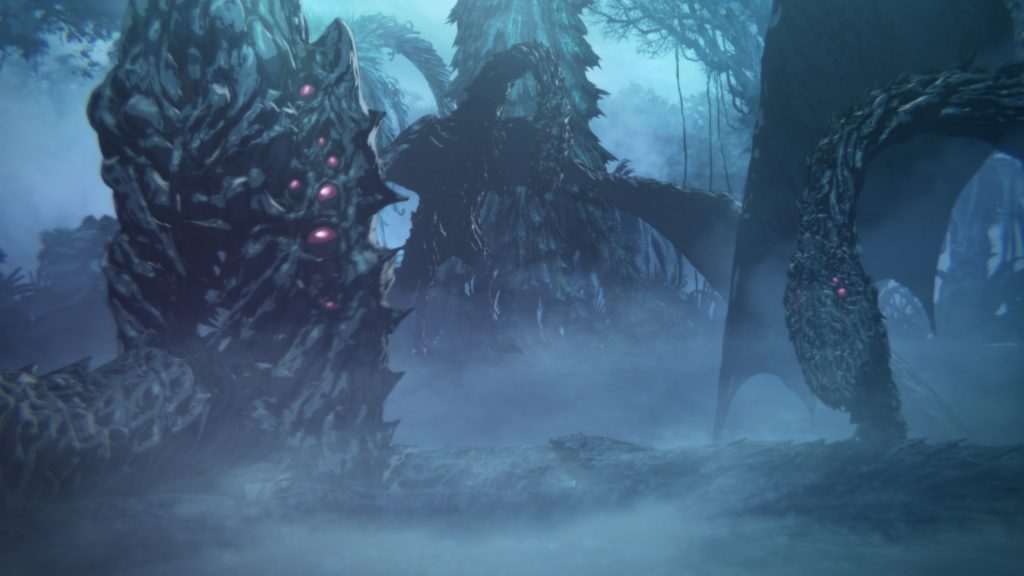 Just like Godzilla: Planet of the Monsters, there is a lot of talking, of the interspecies politics sort, the what-the-Hell-are-we-going-to-do sort, and the more pragmatic how-are-we-going-to-do-it sort. And I was very weary of that from the first film, so had to deliberately keep paying a bit more attention: gradually it became clear that it wasn’t just talking (albeit with some great images demonstrating the stuff they were talking about), but there was some really interesting plot development going on. Tension between the non-human races Exif and the Bilusaludo (I’m inclined to call them Elves and Klingons, to be honest) became apparent, especially in relation to the “nanometal”. And of course there was some debate about whether it is worth fighting something so big; a brief debate, naturally, as the Klingons have such a loud voice when it comes to battle decisions.

I loved the visuals. The animation is a reasonably familiar style but sharp and more detailed than most. Yes, Godzilla himself (and some of the related creatures) have that weird metallic feel that Oli mentioned in his review of Godzilla: Planet of the Monsters; but I didn’t mind accepting that, as this trilogy does stand alone from previous Godzilla presentations (though I have an inkling it may be set in the same Godzilla universe as Shin Godzilla). The forests were fascinating, and I wish the film had explored them more, but the film did explore underground, where the indigenous “Houtua” live, so there was plenty of variety in the setting, not just the interior of spaceships or wide-shot battles. The battles were great to watch; some of the Kaiju scenes Pacific Rim would have been envious of. But we could still have done with just a smidgen more action, and more of the monsters vs. monsters or robots stuff, rather than simply being shot at or bombed. 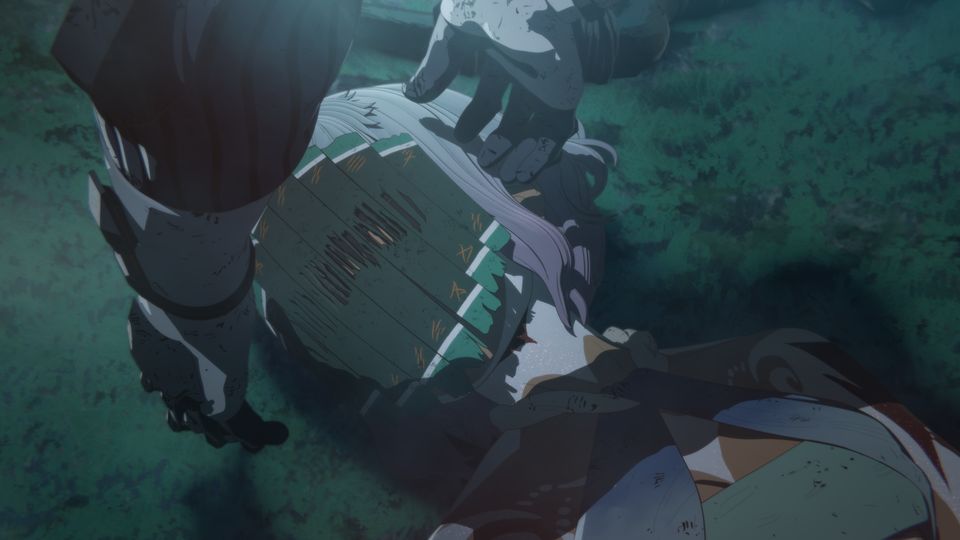 Some parts of Godzilla: City on the Edge of Battle are way over the top and ludicrous. Yes, I know some of the best anime is over the top, but honestly: the new Godzilla is 300m tall, almost three times bigger than the previous record (and it has a heat ray!). And I actually laughed out loud when the party was looking for the remains of Mecha Godzilla (from the last film) and ran into – spoiler alert – a city it had evolved into, instantly naming it Mechagodzilla City, as though that was the most natural thing. But move past that, and the film does get exciting: the last third, especially, is where the strategy, the fighting, the individual and species struggles do all come together and the viewer’s patience pays off.

I went with the dubbed version of Godzilla: City on the Edge of Battle, for a change; I usually prefer original Japanese, as the American voices tend to jar or sound like they don’t belong. But this time, they seemed perfectly competent. Along with the Japanese cast, the American voices all seem to be experienced in animation, game or general voice-over work, and I had no problem accepting them at all. I especially liked Taylor Henry, who voiced Mulu-Elu Galu-Gu (one of the Bilusaludo senior officers): he reminded me of James Woods in Final Fantasy: The Spirits Within… but it turned out he also voiced Helsinki in Money Heist. 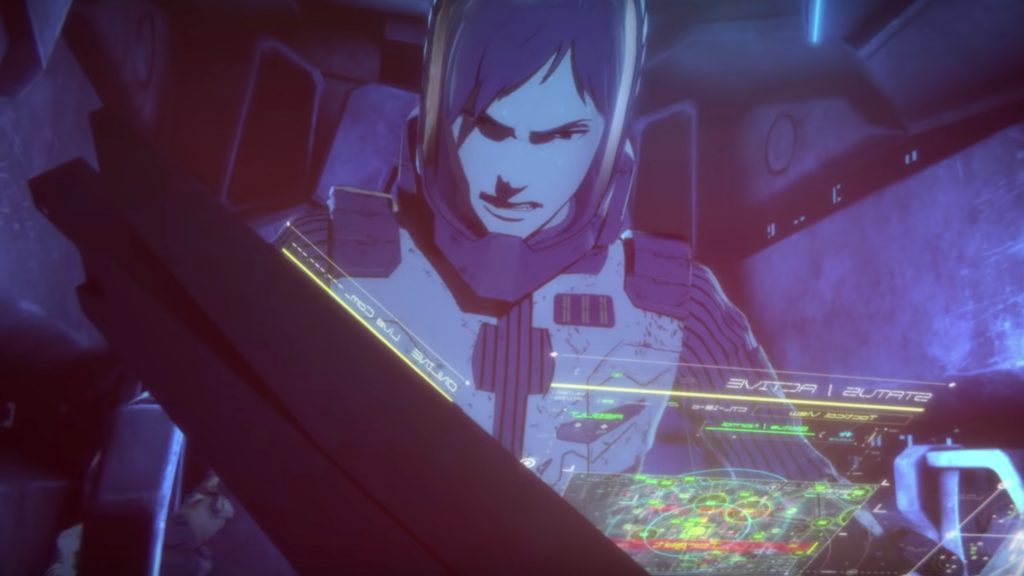 There have been over thirty Godzilla films since the 1950s. This trilogy is the first time they have been animated, and overall, a very serious and worthwhile effort so far.  Between watching the first and second film, I did find myself wondering if this trilogy (essentially “Godzilla in the future”) had strayed too far from the originals. Was it still really Godzilla? Originally, Godzilla represented the threat of nuclear destruction to the world; later, a more general ecological defendant of humanity (against other monsters). Looking back now that I’ve finished watching it, I can see the nuclear analogy again: this time, in relation to the potential for dreadful escalation, and hopeless outcome. The monster is bigger than last time, and the attack on him gets bigger (along with its impact).

Watch past the credits of Godzilla: City on the Edge of Battle, and pay attention to conversations with the non-human races: it wouldn’t surprise me if the next threat turns out to be planet sized.

2 thoughts on “Godzilla: City on the Edge of Battle Review”