The Equalizer 2 is still able to get by on Denzel Washington’s star power and Antoine Fuqua’s direction, but it’s a dreary step down from its underrated predecessor.

The Equalizer 2 is still able to get by on Denzel Washington’s star power and Antoine Fuqua’s direction, but it’s a dreary step down from its underrated predecessor.

I’m an unapologetic advocate of Antoine Fuqua’s The Equalizer, from 2014, which rebooted the late-80s Edward Woodward TV series with a tea-sipping, classic-literature-reading, obsessive-compulsive Denzel Washington as ex-military wrong-righter Robert McCall. It brings me no pleasure to report, then, that The Equalizer 2, which opened this week, is essentially what stupid people thought the first one was.

After using his former place of work to stage an R-rated Home Alone-style assault on Boston’s Russian pimp contingent, McCall is now a cab driver. But he’s also an occasional international man of righteous face-punching, as evidenced by an opening scene in which he corners some baby traffickers on a train to Turkey, all while wearing a hilarious fake beard. This stuff’s the wrong way round. Without having to lay the groundwork for the character, the sequel is quicker, more nimble, but it also deprives the audience of trying to work out exactly what’s up with this exceedingly polite, thoughtful older gentlemen.

That’s sequels for you, I guess. But in the first film, when the action eventually arrived, it felt earned. In The Equalizer 2 you can’t wait for things to slow down so you can check in on how McCall is doing, but it turns out he barely has anything to say these days. He has swapped his fatherly affection from Chloe Grace Moretz to Moonlight’s Ashton Sanders, here playing an African-American art student who’s letting his creative passion slide in favour of hanging out with gangbangers. But the lessons McCall has to teach are the same, plucked from the same classic novels; they’re stored on a bookshelf that hides a secret room, which becomes a plot point, but not one worth remembering. 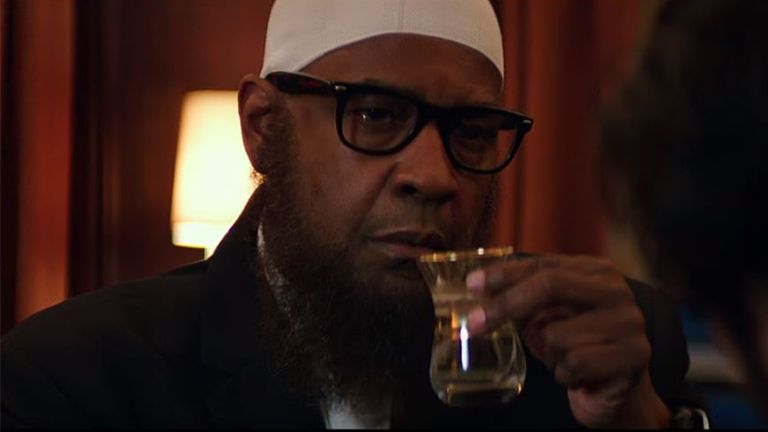 McCall reads to be closer to his late wife, who was working through the same list of 100 novels you had to read before you die. Didn’t finish it, obviously. McCall’s close – he’s on the last book – but it doesn’t mean anything now; I only know why he’s doing it because the first film told me. It’s another character trait that The Equalizer 2 boils down into an affectation, like the starting of stopwatch before bludgeoning a room full of goons. McCall’s obsessive tendencies were fairly central before, symptomatic of a man left adrift, trying to find meaning in neurotic order and routine. In this film, it’s a gimmick, like so much else besides.

Even the centrepiece dialogue exchange between Washington and Marton Csokas’s villain is repurposed here, deployed at the very beginning, no less, and involving a child kidnapper who has no function in the main plot, which doesn’t even properly begin until halfway through. That plot concerns McCall’s former Agency handler Susan Plummer (Melissa Leo) and his ex-partner Dave York (Pedro Pascal), the only still-living links to his previous life. I didn’t make much sense of it; I don’t think McCall did, either.

The climax is a bloody shootout at a storm-lashed beach house, and it turns out that Antoine Fuqua can still direct the hell out of an action sequence. Which is just as well. But in the best scene of The Equalizer 2, nobody dies. It’s just a chat on the street outside a well-appointed suburban home, in which McCall jovially explains to the villain and his henchman that he’s going to kill them all, one by one. That’s why you hire a star like Denzel Washington, who can lend real menace to dad jeans and button-down shirts. Nobody is cooler. Which, again, is just as well. The Equalizer 2 burns his star power for fuel. This is the first sequel of the 63-year-old star’s long and storied career. I hope he doesn’t make any more.