Bodyguard Episode 5 tightened the screws and deepened the conspiracies in preparation of a finale that the whole country is waiting for.

Bodyguard Episode 5 tightened the screws and deepened the conspiracies in preparation of a finale that the whole country is waiting for.

Jed Mercurio’s Bodyguard has squirrelled its way into the national consciousness, one assumes for a couple of reasons. The first is that it deals with terrorism and civil unrest at a time when such things are more worrying than they perhaps ever have been. And the second is that it’s exceptionally well-made; a tightly-wound thriller that shirks convention and expectation at every opportunity. Bodyguard Episode 5 might not have had David Budd (Richard Madden) pulling handbrake turns under sniper fire, but it had twists galore and teed things up perfectly for a finale that the whole country seems to be waiting for.

Among the revelations this week was that the bomb which splattered Home Secretary Julia Montague (Keeley Hawes) was not, in fact, located in a briefcase carried on stage by Tahir Mahmood (Shubham Saraf). In reality it was hidden under the St Matthew’s College stage and triggered by a pressure sensor, which raises all kinds of other questions. How wasn’t it set off accidentally? Why did it just happen to be Tahir’s presence that detonated the device? Could it have been activated remotely?

It’s exhausting, really. Bodyguard Episode 5 was the hydra of taut television – it kept cutting off the head of one conspiracy and replacing it with two more. DCI Deepak Sharma (Ash Tandon) was having a mare with it all, especially when Budd’s increasingly outlandish theories kept turning out to be more and more plausible. For one thing Mike Travis (Vincent Franklin) and advisor Rob Macdonald (Paul Ready) were up to something – fearing a leadership bid, they’d sabotaged Julia’s speech with wonky details that’d hopefully discredit her, but they probably didn’t stick a bomb under the stage. So who did? 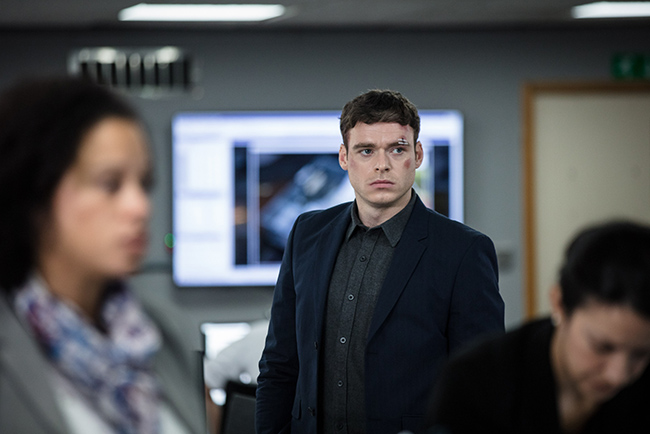 That’s the question, isn’t it? It might have been the Prime Minister, who it turns out is a bit of a dirty dog, and it might have been the Security Service, particularly the sinister Richard Longcross (Michael Shaeffer), who has been personally searching every apartment in London, nicking CCTV footage, interrupting Budd’s efforts to look into the case, and informing his wife, Vicky (Sophie Rundle), along with whoever else will listen, about the affair between Julia and her PPO. There’s even a recording of it, apparently. There isn’t a single establishment in the country that this guy doesn’t have bugged. And according to Nadia (Anjli Mohindra), it was Longcross who supplied her husband with the suicide vests.

Like I said – exhausting. Are we really to believe that those in charge of protecting our nation from terrorism would assassinate a cabinet member? Doesn’t seem like much of a stretch to me, but then again I’m a disaffected loner not unlike Sgt Andrew Apsted (Tom Brooke), who was finally identified in Bodyguard Episode 5 as the sniper who took potshots at the Home Secretary. Nobody yet, though, has uncovered that he served in Helmand with Budd, or that the pair had at the very least a casual relationship back in London, which seems faintly implausible. One for the finale, I’m sure.

That finale is, obviously, what all this is building towards, and were Bodyguard a lesser show I’d insist that there’s too much going on here to wrap up in a single episode, especially now that Julia’s sacked and sassy PR advisor Chanel Dyson (Stephanie Hyam) strolled into Bodyguard Episode 5 with a link to organised crime, as if things weren’t complicated enough. But I’m confident. Now that Budd has been stripped of his badge and gun and is officially rogue, I think we can trust him to get to the bottom of the matter, even if doing so might cost him more than his career.