Marvel Rising: Secret Warriors is pitched squarely at a young demographic who’ll likely get something out of the representation, but it still isn’t very good.

Marvel Rising: Secret Warriors is pitched squarely at a young demographic who’ll likely get something out of the representation, but it still isn’t very good.

First, a disclaimer. Marvel Rising: Secret Warriors is quite obviously pitched at kids in general and young girls in particular, and I’m a twenty-eight-year-old man. So, despite some of the horrible things I’m going to say about this made-for-TV sort-of sequel to the six Marvel Rising: Initiation animated shorts that were released in the summer, your mileage is probably going to vary based on your tolerance for sugary girl-power entertainment.

In fairness, most of my criticisms aren’t really about that stuff anyway, but it’s worth mentioning all the same so I don’t have to filter through the idiots getting annoyed that I’ve missed the point or whatever. Okay? Okay.

So, Marvel Rising: Secret Warriors is essentially an origin story for a team of younger superheroes that shines a particular spotlight on women and people of colour, and that’s never a bad thing when you consider both a) how diverse Marvel’s roster actually is if you care to look, and b) how decidedly not diverse most of the live-action movies have been. And look, I’m the further thing from a crusader in this regard, and I find tokenistic attempts at diversity to be as bad if not worse than no diversity at all, but more stories that are aimed at and include people from all walks of life is unequivocally a good thing and I’ll hear no more on the matter. So, kudos to the film in that regard. 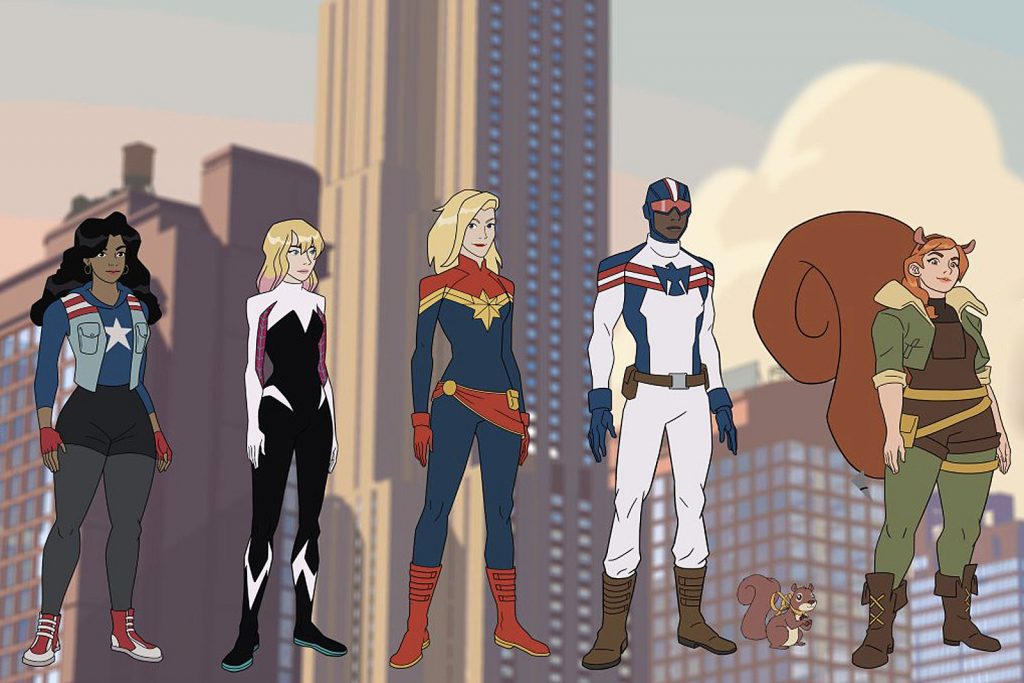 Unfortunately, that’s about it as far as the plaudits go. Front and centre are Kamala Khan and Doreen Green, aka Ms. Marvel and Squirrel Girl (Kathreen Khavari and Milana Vayntrub), and there’s nothing wrong with that, but you’ll realise quickly that the quality of the writing since those Initiation shorts has taken something of a hit, and the characters have been softened to better resemble the target audience. The youthful-skewing personalities reduce three-dimensional characters to a couple of quirks, and immature, off-brand behaviour is used here and there as a lazy encouragement for some plot to occur. Less pivotal characters suffer the most but you’ll notice it everywhere.

That plot, seeing as you’re asking, revolves around a missing-kid mystery and a brewing conflict between humans and Inhumans which is here treated mostly as a heavy-handed, trite metaphor for accepting all kinds. Spider-Gwen (Dove Cameron) is nowhere to be seen, but on-hand as supporting characters are Inhumans Dante (Tyler Posey) and Victor (Booboo Stewart), S.H.I.E.L.D. agents Daisy Johnson (Chloe Bennet) and Rayshaun Lucas (Kamil McFadden), aka Quake and Patriot, and America Chavez (Cierra Ramirez), who’s a heavy-hitter both powers-wise and in terms of that aforementioned representation. (Her origin is kept most intact.)

The problem here is that it’s a bit too much for the movie to juggle; too slight of a running time, too many spinning plates, too many boxes to check, so on and so forth. Introductions are frequently uneven and occasionally contrived, the pacing is all over the place, go-nowhere subplots bog things down, and characterisation pivots wildly for no justifiable reason. None of these issues alone are severe enough to cripple Marvel Rising: Secret Warriors, but a handful of hairline fractures all occurring together will accomplish the same thing. 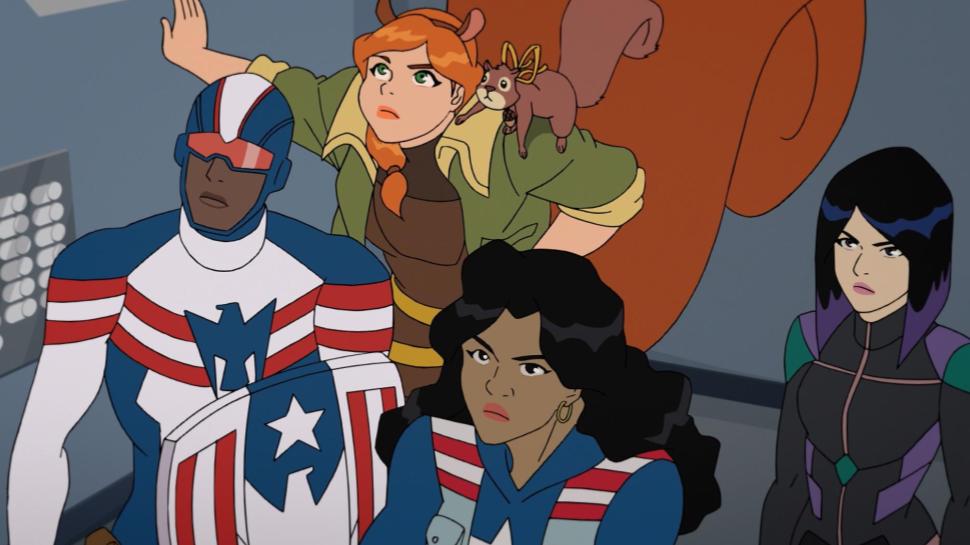 Marvel being tight-fisted when it comes to these projects certainly doesn’t help – and is a big reason why DC and Warner Bros. have consistently surpassed Marvel in animated output. The film’s noticeably cheap-looking, with dodgy shading, inconsistent heights and proportions, and clumsy, lifeless action. And the action, even such as it is, always seems to be accompanied by saccharine, up-tempo pop empowerment anthems that lay on the film’s messaging far too thickly and just seem totally ill-suited and unnecessary.

Ms. Marvel is a great lead, even if her blatant hero-worship of Captain Marvel (Kim Raver) is a bit on-the-nose as a commentary on why just being oneself is enough. Better is Kamala’s relationship with her mother and her grappling with her status as an outsider (being an Inhuman in this context is basically shorthand for her being a Pakistani-American Muslim). Shrinking the cosmic happenings to a scale that accommodates her relatively run-of-the-mill teenage anxieties works really well and is ideally-suited for the film’s target audience, and Doreen is always a riot.

Marvel Rising: Secret Warriors, then, is an incredibly flawed piece of work, but keeping in mind the disclaimer at the top, there’s enough squirrelled away in there that a certain type of audience might find it somewhat worthwhile. It’s a shame that Marvel, so successful elsewhere, seems so reluctant to devote proper energy and resources to its animation, and this film is very much a victim of that thriftiness, but perhaps the target demographic won’t notice when they have Ms. Marvel and Squirrel Girl to distract them. Maybe that’s the point.