Three freshman students are struggling to find a place to belong when they hear a siren call… only to find themselves painfully out of their depths.

Three freshman students are struggling to find a place to belong when they hear a siren call… only to find themselves painfully out of their depths.

Pledge is about a group of bright but socially awkward young men, new to their university and trying to find a fraternity which they’d feel at home in, and which would welcome them too. It’s not easy at the best of times, let alone when you’re characters in a horror film. Justin (Zachery Byrd), Ethan (Phillip Andre Botello) and David (Zach Weiner) approach a couple of frat parties and get unceremoniously rejected or turned away, so it comes as a surprise when lovely Rachel (Erica Boozer) invites them to a party, writing the details on Ethan’s arm. It’s a club they’d not come across before, but the welcome is warm and the atmosphere seductive; so when at the end of the party some of the older and successful-looking hosts declare the guys are invited to pledge… well, why the Hell not?

And you can just tell: lovely Rachel is too good to be true. What you can’t tell is what these freshers are walking into: is it going to be some affair where a new kid is sacrificed to the Devil or something? Or are they going to be made to fight each other to the death, or what? The sense of an unknown disaster creeping towards them is palpable to the viewer, but of course, not to the guys themselves.

Hazing, college initiations and fraternity pledges aren’t really a feature of UK universities… or at least they weren’t when I was a student. So my only exposure to that kind of process/ritual is through films, such as Raw and Dazed and Confused. Trust me, though: any pledge tasks you’ve seen on film before are mere playground games compared to what happens here, but the horror isn’t so much in what happens to these students, but why the demands are this tough, and whether they can actually turn back.

Pledge may appear fairly light at first, but it is not a typical tongue-in-cheek horror about college airheads with little personality. These are young men who are thinking seriously about their future, and figure the best social connections now will make all the difference. They all have distinct characters, not just clichéd types which we see so frequently in horror films (the worst in my recent experience being Romina): Pledge is a film which puts as much effort into characters as it does plot, action, production and writing all put together. Interestingly, even the older characters (the three who dish out the challenges) have been given personalities of their own, too; albeit presented to a smaller degree. At times, it is tempting to support their cause, especially as it’s very clear they know what they’re talking about.

In terms of the horror style, I did think once or twice that it was going to turn out to be like those films in which a simple-but-nasty challenge or task gradually becomes worse (you know, like Would You Rather?, 13 Game of Death, or the early Saw sequels). But I promise you it is much more rewarding; in terms of the plot resolution, almost as rewarding as Ataud Blanco, but more rewarding in terms of the writing, production and – as mentioned already – characters.

Daniel Robbins’ direction is very effective: his is definitely a name to watch out for, and I’d like to see if he can make thrillers on bigger sets than this just as effectively. The way he took the camera and action in unexpected directions kept me engaged, excited and not knowing how things were going to turn out, or who would come out on top.

The production and cinematography, too, are superb: every location, every room has its own sense of place and knowing care taken over how it is presented. Some films have issues with lighting when so much takes place indoors (especially at night), but not this one: it’s only dingy when it’s supposed to be. Equally, the contrast with shots taken from outdoors (most notably at the start) does not show up the interior views as inferior in any way. The soundtrack complements the production nicely, with some eighties-style electronic for atmosphere here and there, and very fitting party music to set the scene.

I’ve not mentioned the acting… but not a single one of the cast with speaking parts – even the smallest – was below par. All the three protagonists mentioned already were memorable, and the frat leaders equally so: they are played by Aaron Dalla Villa, Cameron Cowperthwaite (Speed Wagon in American Horror Story: Cult) and Jesse Pimentel. Some have highlighted Cowperthwaite and Byrd as the actors of note; but for me, the one who is most in my mind now, two days after watching is Joe Gallagher, who played Ben, an additional pledge to the main group, who had a very small speaking part. 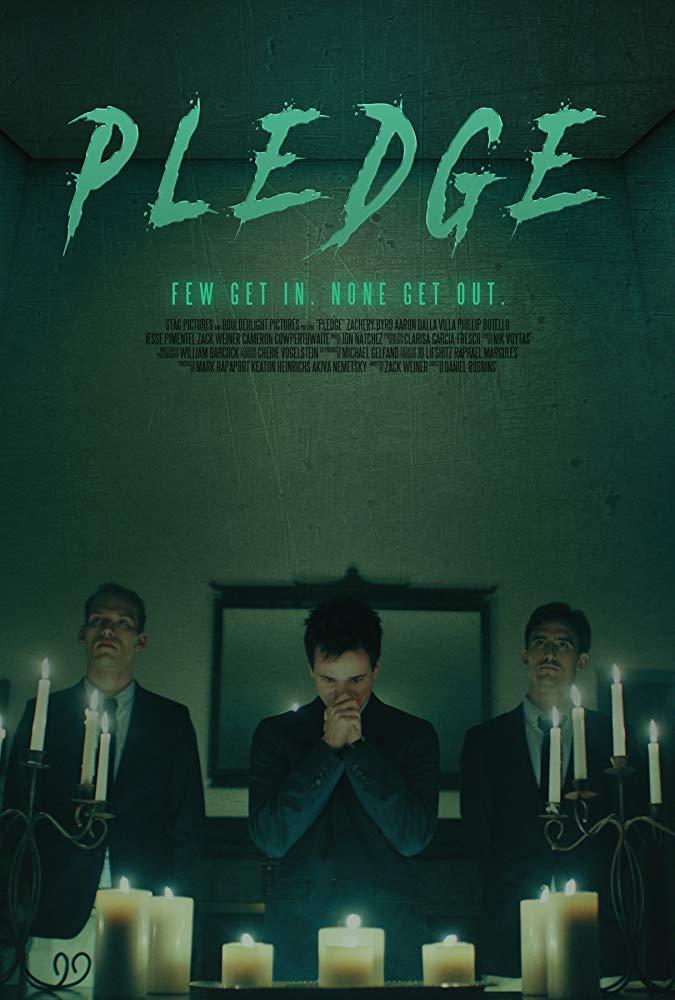 Overall, Pledge is worth a watch for horror and thriller fans, assuming you have a strong stomach; but if you’re coming at this via genre festivals (it’s just had its European premiere at Grimmfest), I’m sure you do. It’s a very tough watch, but short enough that you simply have to plunge in and keep going. It may seem familiar on the surface, but once you reach the other side you’ll see there are plenty of qualities that stand out and make the film stand on its own. I shall certainly be keeping an eye out for more with Zach Weiner’s and Daniel Robbins’ names attached.

This review is part of our Grimmfest 2018 coverage. Check out the whole lot here.