‘ReMastered: Tricky Dick and the Man in Black’ | Netflix Review

ReMastered: Tricky Dick and the Man in Black is an interesting exploration into the politics of Johnny Cash with a great soundtrack, but ultimately fails to deliver a satisfying resolution to many of the ideas and elements it tries to introduce.

ReMastered: Tricky Dick and the Man in Black is an interesting exploration into the politics of Johnny Cash with a great soundtrack, but ultimately fails to deliver a satisfying resolution to many of the ideas and elements it tries to introduce.

In 1970, concerned by growing dissent in the face of the Vietnam War, President Nixon reached out to country western musician Johnny Cash to perform at the White House and lend mainstream credibility to his administration and its policy on Vietnam. ReMastered: Tricky Dick and the Man in Black tells the story of that performance and how it shaped the politics of Johnny Cash.

This 58-minute documentary covers a lot of ground and gives its audience much to unpack. We are presented with two separate stories, intersecting at Cash’s performance at the White House in 1970 during the most divisive and politically volatile period of 20th Century America. One is an examination into how Richard Nixon’s administration actively pursued what they termed the “Southern Strategy”, a political campaign designed to appeal to “the silent majority”: socially conservative, working-class people from middle America. We are introduced to how divided America had become during the late-60’s and early-70’s; and how the notion of patriotism had become disputed. Protesting and civil disobedience were viewed by the president and his staff as a threat to America whilst those protesting considered the president himself to be the threat. This is enough material for a documentary series, let alone a one-off episode.

The second story we are told during Tricky Dick and the Man in Black is Johnny Cash’s. We are told about his background growing up poor and working in a Cotton Field, we are told about his difficult relationship with his father, rooted in a family tragedy which left Cash’s younger brother dead far too young. Cash’s values initially appear to align with Nixon’s, which make him a perfect representative for the administration; this, despite Cash attempting to keep his political views out of the spotlight. Due to his image and how it represented ordinary Middle America, Cash is invited to perform at the White House. Once there his performance is not entirely what the president had in mind. After visiting Vietnam to perform for the troops, Cash had started to question the war and the way that anti-war protesters were being treated. His song “What is Youth?” was performed as a clear message to the President that he should consider carefully how he treats those who disagree with his views. 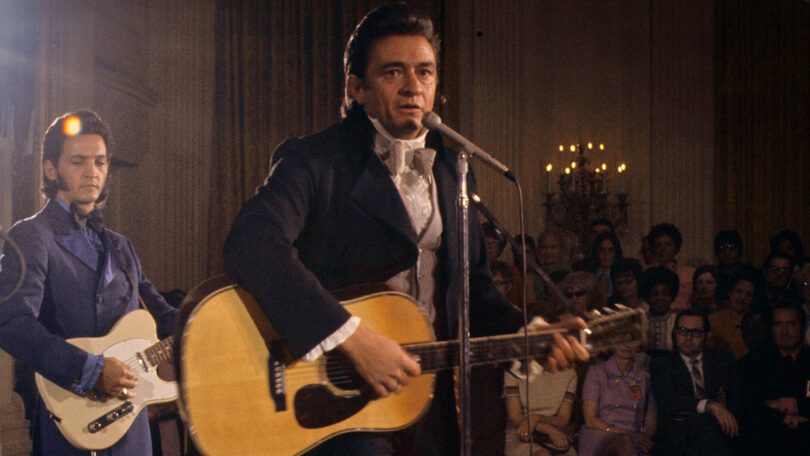 The format of this documentary is familiar, with lots of talking heads, both from the Cash family and from the Nixon administration. Having eyewitness accounts from people on both sides of the event gives the episode a well-earned richness and authenticity. In between the talking head,s we are shown archive footage of Cash concerts and newsreels of the events that were taking place at the time. All of this is set, unsurprisingly, to a great Johnny Cash soundtrack, which for fans of his music will make this essential viewing.

Tricky Dick and the Man in Black really suffers from the fact that the backdrop to the story it is telling is actually far more interesting than the story itself. In the end, the episode fails to tell us really why the performance at the White House was significant (other than in shaping Cash’s political views) and there do not appear to be any consequences to the performance for either Cash or Nixon (although they do imply that Cash’s song may have somehow influenced Nixon’s decision to invade Cambodia, which seems highly unlikely). It would also benefit from being much tighter; there are several interesting details that never go anywhere and seem to just get dropped completely having been set up (Cash’s drink and drugs habits, his affinity to people in prison, how his family benefited from the New Deal, Apollo 13, Watergate), something that a longer running time would help to mitigate and give this room to breathe.

Tricky Dick and the Man in Black is an interesting insight into the political development of one of the 20th Century’s most interesting musical performers. For fans of country music and Cash, it will be of particular interest and is worth its 58-minute running time. However, this documentary has so many threads that are never really explored and seems to dwindle to an underwhelming climax preventing it from becoming as compelling as its subject matter suggests it should be.

You can check out our thoughts on the previous instalment of ReMastered by clicking these words.

1 thought on “‘ReMastered: Tricky Dick and the Man in Black’ | Netflix Review”