With a high mind and a slow pace, Imitation Girl turns what would be a good film into a middling one that is fairly hard to recommend.

With a high mind and a slow pace, Imitation Girl turns what would be a good film into a middling one that is fairly hard to recommend.


Imitation Girl saunters around with the best of science-fiction, in my opinion, because it introduces sci-fi elements into a world otherwise recognizably modern. While there is a lot to say about films that take the path of meticulous world-building (Blade Runner, for example), as is evident by the countless amounts of schlock released under the genre’s banner, the ability to successfully build entire worlds that are convincing is a formidable, laudable feat very few can achieve, especially when production teams work without Hollywood budgets. So I am able to accommodate far less development on the world-building front in a film if there are significant developments on others. Such is the present case.

Written and directed by Natasha Kermani (Shattered, The Turing Love Affair), Imitation Girl opens with an extended shot of a simple sale of liquor, which proves a smart choice. The choice is smart because it establishes an atmosphere that is quiet and unhurried and on the edge of safety, almost lonely, sensations that will be repeatedly felt throughout. Not only this, the opening also allows for sudden small changes in tone — which will also occur throughout — as following the sale we see the delinquent who bought the liquor set up to have the shock of his life when the sky opens up and out falls… well, something not exactly terrestrial. The impact is obfuscated, but what we know is that ooze seeps over a lady’s magazine now abandoned by the boy and that this ooze begins to linger over the name Julianna Fox.

Julianna Fox is an adult film actress. She spends her days going from film sets to stripper joints and back to film sets again. She has become accustomed to a certain humdrum involved with the work. In one telling scene she zones out and is asked by the director if she needs something in particular to happen in order to work. She does her work and carries on with her day. Later, from a chance meeting outside of work while going about her day, we learn that Julianna knows how to play the piano, or at least she did. It reminds her that she was once going somewhere with her life, somewhere she would still like to go if she could. As played by Lauren Ashley Carter (The Woman, Jug Face), Julianna seems to have forgotten much more about life than most people will ever learn. 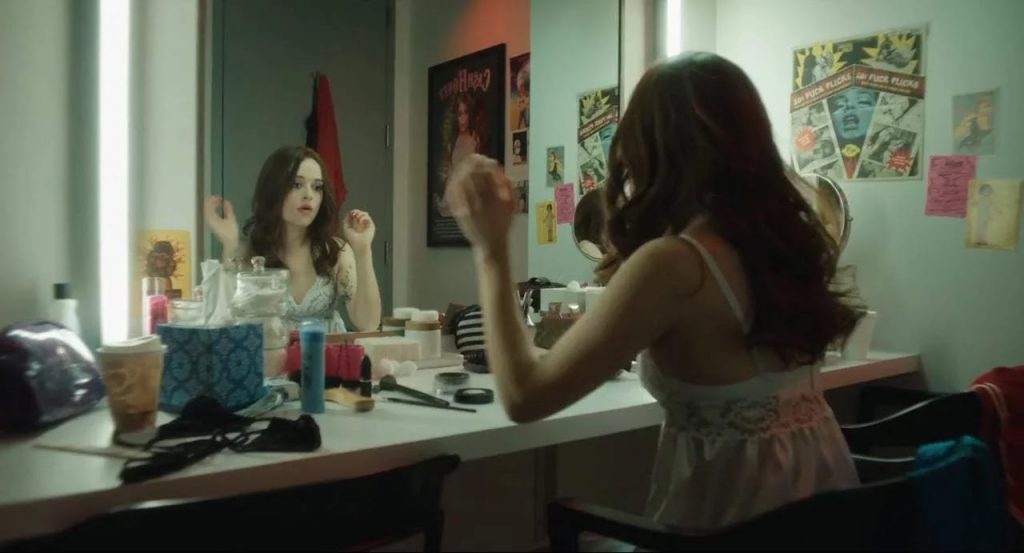 It’s what she’s forgotten about life that is, in fact, the subject of Imitation Girl. To teach this lesson, the film’s genius is to introduce an element into the world that is stripped of humanity and has to build that humanity from the ground up. How would it look to have someone start their life in the middle? Would they be able to make it? Would they be better for having started in the middle? Would there be a revolutionary conversion for the rest of us? What would be the person’s assimilation time back to normal? I, for one, do not have those answers. But I will add to those questions one of my own: Must fatigue and depression inevitably set in?

That Carter is able to play the inexperienced alien character, the Imitation Girl, convincingly and with distinction from the adult actress Julianna Fox is a satisfying feat because, while the original Juliana grows more despondent with life, the imitating Juliana must become more enthralled, more appreciative. Sure, the imitation may resemble a child from time to time, but as we grow older many of us remember that in the selfish forgetfulness that is our childhoods, we were able to enjoy the moments before us and were able to create without limits. Childhood in the body of an adult makes us wish hopelessly to return again to such moments so that we may feel again such unparalleled simplicity. Sometimes, even, as is the case in this film, to be in the presence of childhood innocence makes us better people. Of course, these desires to return to the past must be only an intermittent indulgence. Julianna did not learn that lesson. She has made enjoyable things unenjoyable because she has engaged with them immoderately.

But things are not all bad in the present, and it is the appreciation for life coming from the imitating Julianna that leads to the very interesting conclusion, which I will not ruin. Of note, however, is the way in which knowledge is presented variably in the film. If we knew more than we know now, would we be in a better place in our lives? Could we find true love and beauty in the world? How would we behave if we were ignorant of the exploitative nature and the evil intention of some? Would good things follow? These are interesting considerations to make when we understand that knowledge is traditionally treated as if it were a cure-all to our troubles, that if we were but a tad more knowledgeable all things could be made right. Here, in this film, that notion is not presented as if true. The message seems more that knowledge should not be gained haphazardly. Such a wise pronouncement must also be accounted a feat.

The greatest setback for this film, however, is its too deliberate pacing has the potential to confuse and has more than a little potential to suck the life right out of scenes that are otherwise good viewing. This reality must be considered before making the decision to see this film, because depending on one’s personal tolerance, Imitation Girl may be a terrible encumbrance despite its many engaging themes.