Baby is brief and trashy enough that it’ll likely entice a sizeable binge-watching crowd, but all the fuss about it being scandalous doesn’t amount to much.

Baby is brief and trashy enough that it’ll likely entice a sizeable binge-watching crowd, but all the fuss about it being scandalous doesn’t amount to much.

For the same reason that passing motorists pull over to gawp at car crashes, I’m attracted to film and television that is mired in controversy. I’m a simple man. I don’t have much to do beyond saying unnecessarily mean-spirited things about contemporary novelists, so a show like Baby, which debuted on Netflix today, is appealing thanks mostly to how it was condemned by The National Center on Sexual Exploitation (NCOSE) for promoting sex trafficking. Oh, it also “normalizes child sexual abuse and the sex trafficking of minors as ‘prostitution’”, apparently.

Fair enough. Baby is also (loosely) inspired by the real-life baby squillo teen-prostitution scandal, so there’s some basis to the accusation. But to be honest, I’m not seeing it. It’s an Italian teen-drama about disaffected youth in the same way as something like Skins, albeit with a slightly more contemporary nod to social media posturing and set against the snooty backdrop of a private school not entirely dissimilar from Netflix’s own Elite. But it isn’t as unashamedly soapy as that, and the loose association with a real scandal doesn’t seem enough to suggest endorsement of the same, no more than any story loosely based on anything somehow conveys moral approval of the subject.

Even the idea of sensationalising the matter seems misguided. Baby never really leans into pervy voyeurism despite its transgressive dramatic hook, and while teenage prostitution does indeed play a part, it hardly seems like the focus of Baby, let alone its creepy obsession. The impression was of glamorising the idea of underage sex work as some kind of no-big-deal way to act out, but really the show is so determined to be sanitised and palatable that the most appropriate accusation you could level at it is not treating its subject matter with enough realism. But I suppose that doesn’t make for the same kind of headlines. 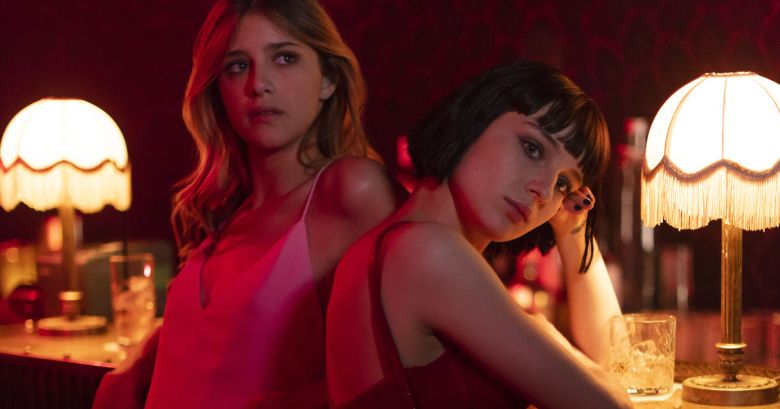 Anyway, plot. Set in the Parioli neighbourhood of Rome, Baby focuses on a group of rebellious students who have predictable dreams of studying in America (always seems to be that, doesn’t it?) and are rightly sick of their caricatured snobby parents and the need to essentially feign a lifestyle that suits the excess-worshipping media masses. The main one is Chiara (Benedetta Porcaroli), who outwardly presents as a goody-two-shoes with a predictably buttoned-up bestie, Camilla (Chabeli Sastre Gonzalez). Naturally she’s lured into the Italian underworld by her new bad-girl mate Ludovica (Alice Pagani), and together they go through the usual rebellious rites of passage, such as skipping school, alienating those previously close to them, and falling foul of dodgy blokes like Saverio (Paolo Calabresi) and Fiore (Giuseppe Maggio).

It sounds more lurid than it really is, honestly. Baby is certainly confused about exactly what point it’s trying to make about youthful exuberance, especially in regards to where to draw the line between immaturity that is potentially dangerous and something that constitutes sexual independence and freedom. It’s not literate enough to be insightful, nor is it really trashy enough to have anything to fall back on when the young heroines make increasingly stupid choices. The young, virtually unknown cast do enough with the material to offset some of the cartoonish writing, but with just six episodes ranging from 40-48 minutes apiece, Baby never really amounts to much. The most noteworthy thing about it is just how un-noteworthy it is after all that fuss.