“White Rabbit” was, on balance, the best episode of Nightflyers yet, chock full of unpleasant imagery and weird turns.

“White Rabbit” was, on balance, the best episode of Nightflyers yet, chock full of unpleasant imagery and weird turns.


This recap of Nightflyers Episode 4, “White Rabbit”, contains spoilers. You can check out our thoughts on the previous episode by clicking these words.

The difference between the real and the imagined is getting ever slighter in Nightflyers, and if “White Rabbit” proved nothing else, it’s that whatever awaits the doomed crew in reality is likely worse – and certainly stranger – that whatever horrors lurk in their minds.

But there are plenty of nightmares to be going on with. Karl D’Branin (Eoin Macken) is being relentlessly tormented by his daughter, Skye (Bronte Carmichael), and by visions of Dr. Agatha Matheson (Gretchen Mol) carving an unborn child from her belly. Thale (Sam Strike) is dreaming of Agatha climbing into bed with him and attempting to suffocate him, and in the waking world, he is receiving sense memories of a dead crewmember frozen solid by a system shutdown. His temperature drops, and in his mind he dies again and again. Later in “White Rabbit” the crewman is found, solid, and his lower jaw snaps loose and shatters on the ground in the best visual of the show so far. 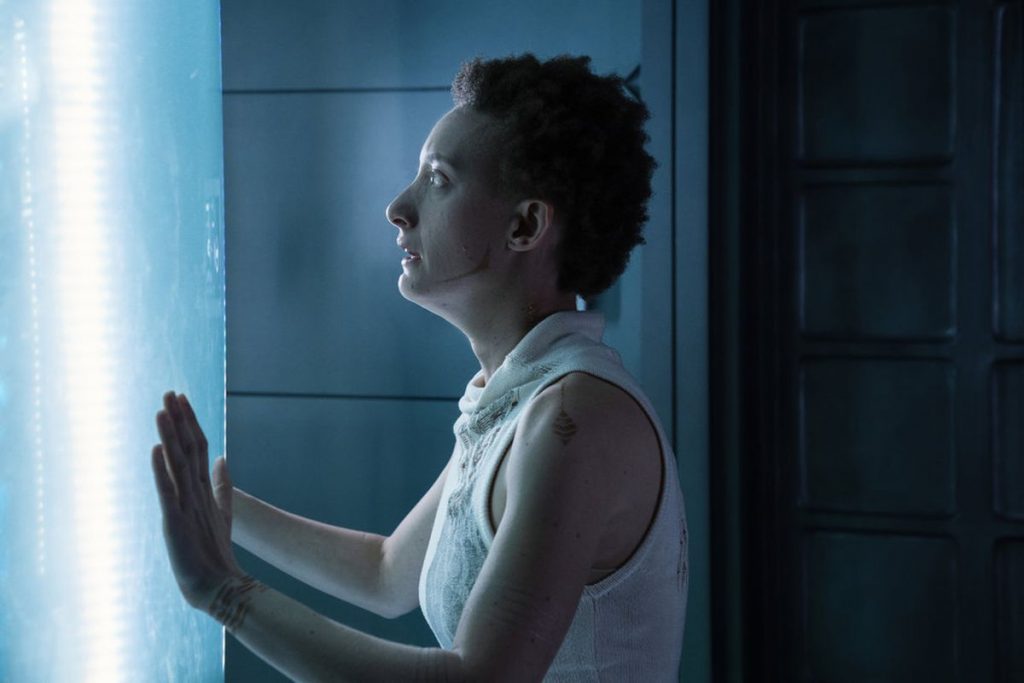 Now that Captain Eris (David Ajala) has revealed that his psychotic mother, Cynthia, has made the Nightflyer the home of her demented consciousness, he can only escape her in the garden, where he finds comfort in the arms – and between the legs – of Melantha Jhirl (Jodie Turner-Smith). He put some graft in for that let me tell you. And even then he’s rewarded by his mother’s screams in his head.

Cynthia’s problem is whatever the White Rabbit probe brought back onto the ship – a gift that finds not only its own way back aboard but directly onto Karl’s bed. Rowan (Angus Sampson) discovers that the probe contains organic material and is bleeding and that the blood contains Karl’s DNA. Lommie (Maya Eshet) takes it apart and is beset by convulsions that also affect Thale; the bloody circuitry pulses all the while. When she finally comes round she explains that the probe contains unknowable amounts of data – it’s a legit alien artifact, and represents perhaps the most significant discovery in human history.

The question now is can the crew of the Nightflyer make use of it before Cynthia has them all kill each other?