Ugly and unfunny, Back Street Girls: Gokudolls fails to capitalise on a deranged premise and mostly comes off as a disappointing and wildly uneven collection of skits.

Ugly and unfunny, Back Street Girls: Gokudolls fails to capitalise on a deranged premise and mostly comes off as a disappointing and wildly uneven collection of skits.

And on today’s episode of Things Only the Japanese Can Get Away With, I present to you the latest addition to Netflix’s wildly uneven stable of original anime, Back Street Girls: Gokudolls. With a wonderfully deranged premise the ten-episode series seems promising enough, but it brings me no pleasure to report that the batshit setup is thoroughly wasted on what is mostly a dull and unfunny eyesore.

That premise, seeing as you’re asking, is as follows. Three yakuza thugs mess up an important assignment, and as penance they’re forced to have gender-reassignment surgery and become J-pop idols. Which is utterly mental, I’m sure you’ll agree. But there’s lots of promise there for silly skits, which the good news is the series provides an ample amount of. The bad news is that they’re rubbish.

Okay, maybe a bit harsh – they’re not all rubbish, but the good ones are so few and far between that wading through all ten episodes quickly becomes tedious. The structure and pacing and rhythm are all off; the general sense, as far as comedic construction is concerned, is that Back Street Girls: Gokudolls was assembled by someone who has heard of humour but doesn’t quite understand how it works. It’s a bit like when you tell someone a good joke, and when they repeat it to someone else they put the emphasis in the wrong place and get the important bits the wrong way around. There’s still a joke there, kind of, but it has been rendered completely inert in the telling. 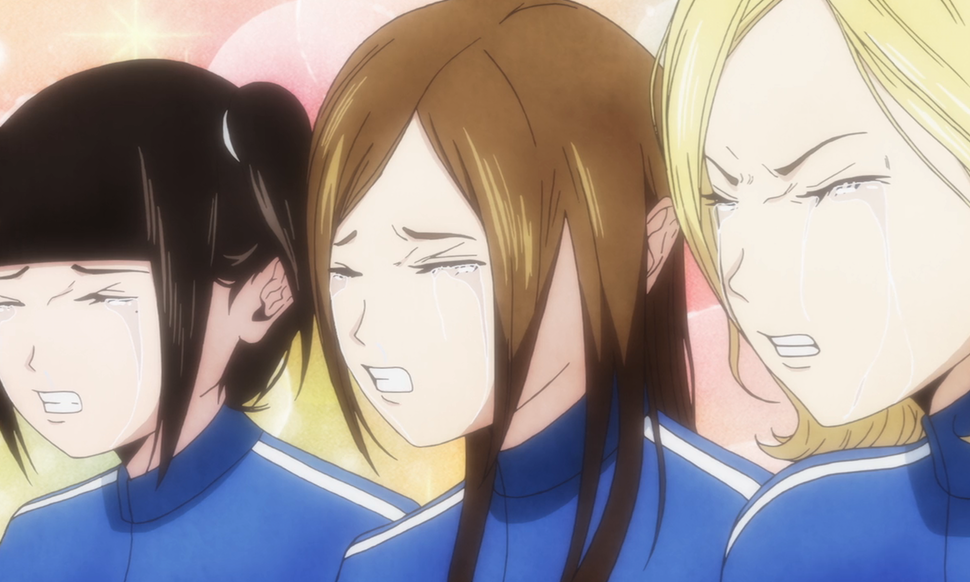 It’s rare to come across a series so blatantly in need of judicious editing. You could trim half of the show away and nothing would really be lost – it’d almost certainly be better, actually, as there wouldn’t be so much room to stretch concepts to the point of absurdity and only the best material would justify inclusion. As it stands Back Street Girls is full of aimless, flailing nonsense, and it doesn’t help that it’s all rendered in art and herky-jerky animation that seems intentionally ugly.

It’s a shame, really. A premise quite this bonkers deserves not be driven so vigorously and so quickly into the ground, yet here we are. There are some scant pleasures to be found in Back Street Girls: Gokudolls (the yakuza boss character is a riot), but not enough to justify ten episodes, and barely, frankly, enough to fill two or three. As I say – a shame. But what can you do?