Channel 4’s Brexit: The Uncivil War has an obvious agenda that non-brexiters will support, but that doesn’t mean it’s a great film.

Channel 4’s Brexit: The Uncivil War has an obvious agenda that non-brexiters will support, but that doesn’t mean it’s a great film.

I’ll admit, I am ashamed to be British at present. And just as the world is laughing at us getting palmed off by Donald Tusk on Instagram, left-wing Channel 4 release Brexit: The Uncivil War. The TV-film is a drama that presents the bubbling mechanism behind the Leave campaign, led by the political strategist Dominic Cummings played tirelessly by Benedict Cumberbatch. While the topic of Brexit is an irritating constant and timely, the movie follows one agenda, but if I am frank, this is not a story we need right now.

If you can get by the first five minutes, where Dominic Cummings mumbles and narrates about control and the establishment, which is f*****g annoying, you’ll soon realize that this political movie is only designed to serve the dramatics. Anyone with a balanced brain will rationally understand that the Leave campaigns were riddled by incompetent bullshit, but Brexit: The Uncivil War serves it in a way that makes it look like a conspiracy. Look, folks, Brexit happened, we were manipulated. Let’s not make it seem edgy or unprecedented that politics is a ball game.

We do not need to see Dominic Cummings making “Big Data” decisions on a rusty park bench with a shifty social media company. Nor do we need to look at an unconvincing and badly acted Boris Johnson (Richard Goulding) looking half confident/half guilty to be part of the leavers. Brexit: The Uncivil War makes all the game players, the politicians, look like someone out of a comic; like they did not exist, and the story only felt real again when the movie decides to place in actual mainstream news snippets from the time. 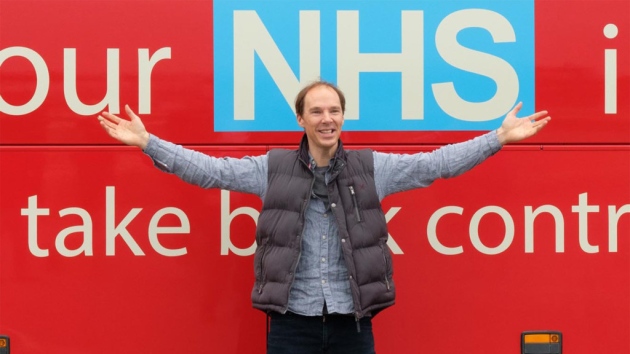 I guess the main issue with Brexit: The Uncivil War is that despite the electoral and criminal investigations, the film felt way too soon. Dominic Cummings is thought of as some enigma, that meditates his mind and envisions revolutions, but the movie confuses the man to a strange degree, where his principles are challenged yet you never really know what he stands for. Like the great stories about the strategists that got Barack Obama and Donald Trump in power who had clear incentives, the story of the Leave campaign doesn’t give the motives of the people running it. They just wanted to win it.

And while you can laugh at the other wrong impressions of Nigel Farage (Paul Ryan) and Michael Gove (Oliver Maltman), you are reminded that this country was incredibly unprepared for the level of hatred that was fuelled during that time. Brexit: The Uncivil War becomes more effective when the Remain campaign strategists realize that this toxic plan has been bubbling for 20-odd years, and eight days left to swing the voters were never going to be successful. If anything Brexit: The Uncivil War reminds us that this country has poor mental resilience even to allow the referendum in the first place, but as a nation, we are so easily manipulated. The reminders do not bypass the fact that this is not a good movie by any means.