Fam runs the gamut from pretty funny to remarkably irritating all in the space of its premiere episode, but the cast is strong.

Fam runs the gamut from pretty funny to remarkably irritating all in the space of its premiere episode, but the cast is strong.


This recap of the Fam Season 1 Premiere contains spoilers.

CBS’s new comedy series Fam – filmed in front of a live, easily-amused studio audience – is one of those network sitcoms that seems to have been written by a forty-something dude imitating a teenager. Even the show’s title is predicated on the idea that “nobody says family anymore”, which I’m sure is nonsense. Then again it is becoming distressingly obvious that I’m not exactly down the kids anymore – which is probably why I’m not entirely down with Fam either.

At least it isn’t terrible. But the show – which feels reminiscent of Happy Together, especially by the end – is frequently too hokey to be taken seriously and too try-hard to be laughed at. It has its moments, though, at least in the premiere, and those moments save it from being a complete catastrophe.

Nina Dobrev and Tone Bell play Clem and Nick, a recently-engaged couple with good jobs and a loving family – on Nick’s side, anyway. The well-to-do professor’s folks are attentive and welcoming, whereas Clem’s mother is dead and her father is… well, dead, according to her. But the surprise arrival of Clem’s teenage half-sister Shannon (Odessa Adlon) threatens to reveal the truth that Clem’s father (Gary Cole) is actually alive and well. 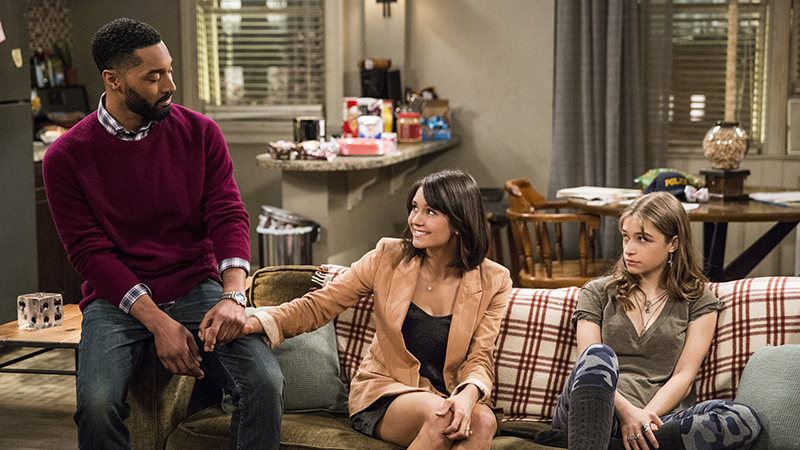 Shannon is a tearaway who breaks into Clem and Nick’s apartment while she waits for her drug dealing boyfriend to secure the deposit for an apartment, which goes about as well as you might expect. She has dropped out of high-school, drinks beer, and totes around a bag of weed-laced walnuts which Nick cheerily eats without realising. But Clem gets it. She rebelled in her teenage years too, and for the same reason – their dad, Freddy, is a clueless, borderline sociopathic homicide detective who, by his own admission, never wanted kids in the first place.

Gary Cole steals every scene he’s in and is easily the MVP of the Fam premiere, even though Odessa Adlon does a fine job backing him up. But the central relationship is aggravatingly cheesy and thoroughly unbelievable; the kind of sugary made-for-TV romance that you could never imagine playing out in real life. There are some good jokes and some terrible ones, but by the time Nick and Clem have invited Shannon to move in with them, Fam tries to veer into touching territory that it isn’t equipped to traverse.

There’s some potential in the premise, but thus far this Fam isn’t one you could imagine yourself staying over with.