It doesn’t do much with its plot, characters or setting, but Revenger has action and plenty of it. And that’s what counts.

It doesn’t do much with its plot, characters or setting, but Revenger has action and plenty of it. And that’s what counts.

With The Night Comes For Us still representing the high-water mark for Netflix actioners out of Asia, Seung-Won Lee’s Revenger, which debuts today, was always going to slightly pale in comparison. But while it doesn’t reach the dizzying heights of that deranged Indonesian bloodbath, the Bruce Kahn-helmed martial arts vehicle makes an admirable attempt to usurp it.

Kahn plays an ageing but impressively shredded copper who, after the deaths of his wife and daughter, arrives on a tropical prison island where various violent criminals are deposited to fend for themselves. Emerging from the ocean trussed up like Hannibal Lecter, he immediately kicks his way into a tentative alliance with Maly and Jin, a mother and daughter who live in a wacky community of outcasts who are constantly being hunted for sport by the henchmen of the island’s mummified nutcase villain, Kuhn.

It’s Kuhn who killed the hero’s family, and also, coincidentally enough, Maly’s husband and Jin’s father. He also lopped off the hand of Revenger’s oddball comic relief character, Bao, who now wears a hook on the stump and leads his dopey mates in made-up haka-like war dances to stave off potential threats. Revenger loves this guy and he gets plenty of opportunity for slapstick shenanigans, as does the community’s senile shaman figure, Grandpa Ipa, who can heal victims of Kuhn’s poisoned arrows just so long as he can smooch his “first love”, who is regularly – and reluctantly – impersonated by one of the bearded men in the camp. 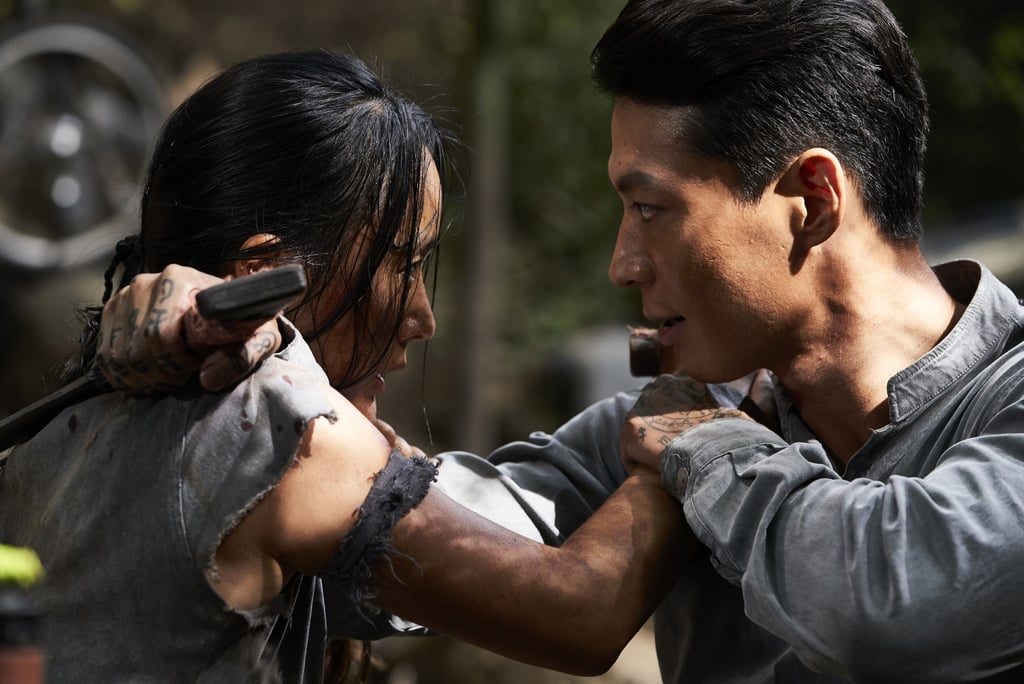 Very little about the nature of the island is explained, nor are the characters particularly fleshed out beyond rote flashback sequences that tend to crop up whenever the good guys are incapacitated or need a morale boost. But that’s to be expected in such a straightforward narrative, and is mostly beside the point. What matters is that the fights look good, as that’s the basket in which Revenger puts almost all of its eggs, and I’m pleased to report that the fights, by and large, are pretty great.

There are a lot of them, too. There’s fisticuffs and arrow-shooting and sword-slashing. There’s a little-guy-big-guy standoff that is – intentionally or not – reminiscent of Bruce Lee’s showdown with Kareem Abdul-Jabbar in Game of Death, even if it doesn’t quite pull off the aesthetics to the same extent. It’s brutal without being over-the-top and convincing without being boring. Kahn is a great physical performer and he’s ably supported by extras who seem to relish the prospect of getting kicked by him. And the final one-on-one arrives at just the right time, feeling suitably climactic, if a little rigged in the hero’s favour.

As it happens, most of Revenger feels designed to show off Kahn’s prowess without really challenging him, which is less of a problem than you might think given how thin the rest of the movie is. There are plenty of fights, but also a fair amount of downtime, and it’s in those sequences that ropey aspects of the screenplay make themselves known. Kahn’s character is responsible for banishing Maly to the island when she was pregnant, for instance, but that never really goes anywhere, and several of the slapstick moments don’t land as well as the film thinks they do. In other words, it’s difficult to care about what’s happening – but you’ll care about how it’s happening, and that’s what matters most.